Gonzalo Higuain says 'everyone' wanted him at AC Milan 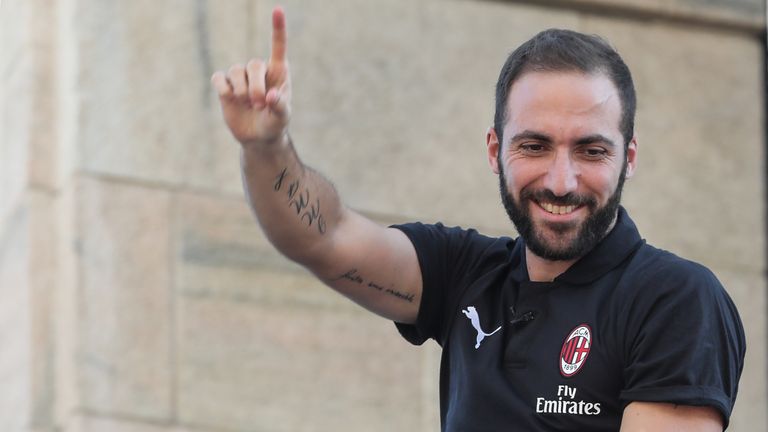 Gonzalo Higuain waves to fans from a balcony in Milan

AC Milan new boy Gonzalo Higuain says he chose the Serie A side over Chelsea because Blues boss Maurizio Sarri was the only man who wanted him at Stamford Bridge.

Higuain had been heavily linked to the Premier League club but, having ended up joining Milan in a three-player swap deal, he was officially unveiled on Friday.

The 30-year-old scored a record 36 Serie A goals under Sarri at Napoli in 2015-16, but suggested that the head coach's new club didn't do enough to sign him.

"The esteem in which I hold Sarri isn't new," said Higuain.

"But the only person who wanted me there was him. Everyone wanted me here.

"The motivation and conviction they showed at Milan was fundamental."

Juventus have let Higuain go after signing Cristiano Ronaldo from Real Madrid but the Argentinian forward does not seem to harbour any ill feelings.

"I have no regrets," he said. "I'm excited about this new challenge, to be honest, and this is all that matters. I want to help get Milan as high as possible.

"I can only spend words of thanks to the Juventus fans. I had two beautiful years there and I can only thank them."

"Having an attacker like Higuain at Milan takes us to another level."