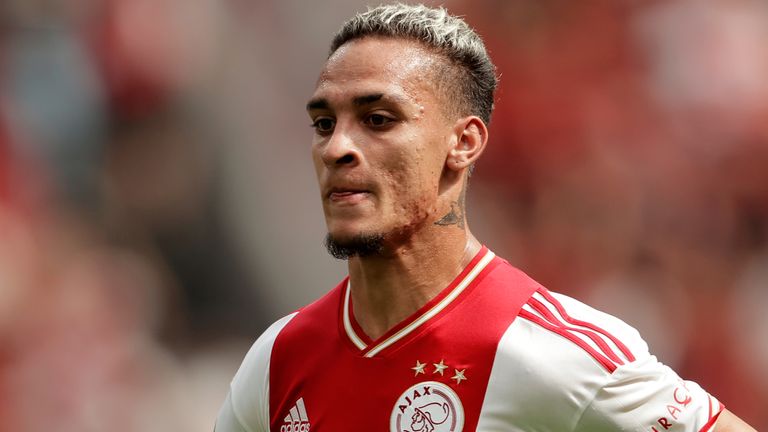 Manchester United have agreed an £85m deal with Ajax for winger Antony.

United will pay a guaranteed £80.75m and another £4.25m in add-ons for the 22-year-old, who completed his medical on Tuesday.

Personal terms have been agreed and a formal announcement is expected soon.

Anthony has to be registered by midday on Wednesday to be available for United's Premier League game at Leicester City on Thursday. It is thought that is unlikely as Antony has to sort out a visa and work permit.

Antony was once again left out of the Ajax squad for Sunday's game at Utrecht as talks between the clubs continued.

Personal terms are not thought to be a problem in this deal.

United have been chasing Antony for several weeks and also saw a £67.9m (€80m) offer rebuffed by the club earlier this week.

United have looked at other options as well. They have an interest in Barcelona striker Pierre-Emerick Aubameyang and continue to keep an eye on his situation. Chelsea have been in talks over signing Aubameyang.

United's interest remains in PSV Eindhoven's Cody Gakpo. Signing both Antony and Gakpo has been described as "unlikely but not impossible".

On Friday, in an interview with Italian journalist Fabrizio Romano on YouTube, Antony said: "Since February of this year, my agents came to Amsterdam to inform Ajax of my desire to leave the club to face a new challenge and that some interested clubs would arrive and, with them, certainly a great offer.

"During the window months, meetings concluded including a proposal from Ajax for contract renewal. I made it clear once again I want to leave the club.

"Today in a meeting with the board I expressed my interest in leaving the club, this time with a considerable offer on the table. Others have already arrived [but] Ajax always refuses with the argument it only has five days to replace (me).

"I'm not asking [for Ajax] to release me, I am asking Ajax to sell me as the highest bid received by a player who plays in the Eredivisie."

A move to United would see Antony reunited with ex-Ajax boss Erik ten Hag, who has already recruited defender Lisandro Martinez from his former club.

"I was very happy in Amsterdam, I won titles at Ajax, made friends and built part of my career, but now I reinforce that I am ready and full of motivation to follow my story and my dreams," Antony added.

"People need to listen to me and understand that my motivation moves me towards happiness. I need this to continue performing at a high level. Ajax will always be in my heart."

The transfer window closes at 11pm on Thursday, meaning United have four days after Sunday to complete any more deals. 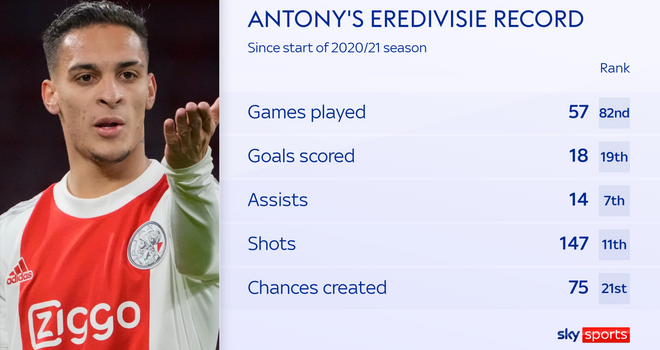 Why Antony is Ten Hag's man

"For sure, we hope he will be the next star of Ajax." It was July 2020 and Erik ten Hag, Ajax's manager at the time, was introducing Antony, the club's new £20m signing from Sao Paulo.

"We at Ajax are always trying to strive for the top," added Ten Hag. "So I expect he will do his best to reach that level of expectation. The rest, we will see in the future."

Ten Hag was right to expect big things of Antony - the Brazilian, only 19 when he agreed his move to Amsterdam, swiftly established himself as one of Ajax's key players - but even he could not have predicted he might one day take him to Manchester United too.