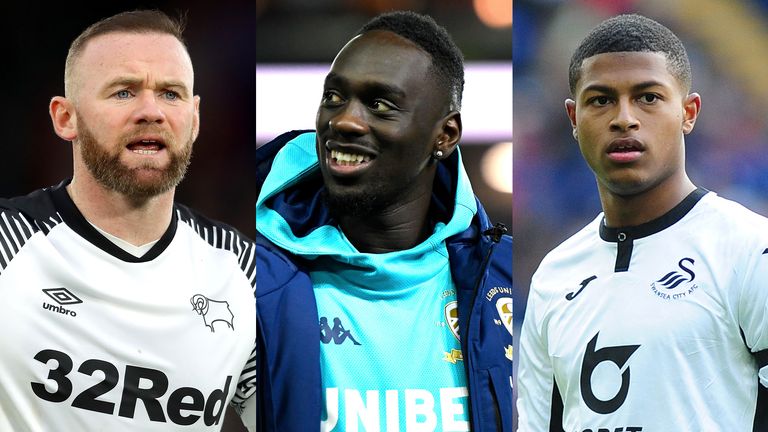 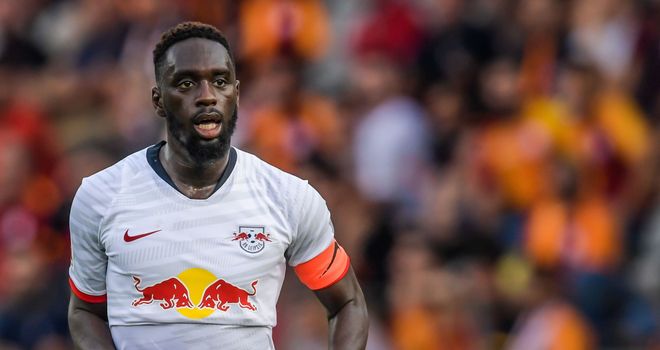 It didn't work out for Eddie Nketiah at Leeds, but their need for a striker to push Patrick Bamford saw Marcelo Bielsa look again for another option and eventually turn to Augustin.

The 22-year-old came through the academy at Paris Saint-Germain, where he made 23 Ligue 1 appearances and scored twice, before joining Bundesliga side RB Leipzig in 2017. Limited appearances resulted in him moving on again, to Monaco on loan at the start of this season, but competition for places there saw him switch to Leeds. In total, he has 14 league goals in 75 appearances in France and Germany so far.

Leeds and Bamford had been struggling for wins and goals of late, but Augustin's presence in the stands inspired the No 9 to his best performance of the season, as Bamford scored twice in their 3-2 comeback win against Millwall on Tuesday night.

"He's a centre-forward with good movement and mobility," said Bielsa of his new acquisition. "In the team, he's involved in the combination play and has a lot of presence in the box.

"He has a well-known background, a good trajectory and he's going to be useful for the needs we have in our team. He is a young player. When he used to play in the [PSG] Academy, he was one of the more well-known players in the world."

It is strange to think of Rooney as a January signing because his move to Derby was announced so long ago. But the switch was only made official during the winter window.

The England and Manchester United legend, now 34, was immediately handed the captain's armband by Phillip Cocu, and Derby have picked up 10 points from his five games in the side. His first goals for the club came this week, too, as he struck in defeat at Luton and in Friday night's victory against Stoke.

Rooney is also a player-coach at the club, having spent a month or so working behind the scenes under Cocu before making his debut, and he will be keen for the move to be a success on his return to English football. He is arguably the biggest name ever to play in the Championship.

"If a player with the qualities, career and the experience of Rooney (is available), you have to be very happy and glad he is here," said Cocu. One of three loan signings made by Swansea boss Steve Cooper in January, Brewster has joined the club alongside Chelsea youngsters Conor Gallagher - who excelled at Charlton in the first half of the season - and defender Marc Guehi.

Brewster, still just 19, has made three league appearances for the Swans since joining from Liverpool, and netted his first senior goal against Wigan earlier this month.

Most renowned for winning the Golden Boot in England's triumphant Under-17 World Cup campaign in 2017, Brewster scored eight times in that tournament under Cooper, and now has the opportunity to impress in the Championship after recovering from a long-term injury.

"Swansea and Steve Cooper asked already in the summer if he can go and it was not the right moment," said Liverpool boss Jurgen Klopp earlier this month. "He came out of a long-term injury, so I thought he needed to just get a rhythm, and get used to his body again, but he needed to get used to the intensity.

"Now he's already training for a long, long period, so it was a good moment to give him on loan and to help Swansea hopefully, and Swansea can help Rhian and then us." Bristol City have been desperate for a striker since the injury suffered by Benik Afobe in September, and they have finally got their man through the door in Wells.

The former Huddersfield striker, who won promotion to the Premier League in 2017, spent last season and the first half of this campaign on loan at QPR from Burnley - where he struggled to make an impact. He has already scored 13 Championship goals in 2019/20 and he was far from short of interest in January.

The 29-year-old Bermuda international has 65 goals and 22 assists in 213 Championship appearances. Bristol City have gone into the latter part of the last few seasons in play-off contention, only to drift away towards the end of the campaign. They will hope the impact of Wells will help them kick on into the top six.

"Nahki is a player with so much talent and he is a proven goalscorer at this level," said Bristol City boss Lee Johnson. "I have spoken before of our ability to create a lot of chances and I think Nahki will help us in terms of that clinical edge which we have needed at times.

"I'm really looking forward to working with him and I think he will be a great fit in our squad, as we set our sights on a strong finish with 18 matches left." Robinson returns to the Championship with West Brom, having struggled to make the grade with Sheffield United in the Premier League.

The forward was bought to Bramall Lane by Chris Wilder in the summer from Preston - having scored 31 goals in 124 Championship appearances for the club - but managed just one goal in 12 appearances in the top flight, although that did come in a 2-2 draw at Chelsea.

West Brom have failed to win any of their last seven games as their promotion push has stuttered, and boss Slaven Bilic will hope that Robinson can inject some much-needed energy into their flagging forward line.

The 24-year-old is capable of playing anywhere across the front line, and will also compete for a starting place with fellow new signing Kamil Grosicki, who arrived from Hull on Deadline Day.

"The majority of the things that I saw good about him is when he was coming from the left side," said Bilic. "That is when you look at him at Preston. Sheffield United play a different system to most of the teams but he can also play up front. He can play behind. He's got a bit of everything." Nottingham Forest's impressive recent run of form has seen them emerge as the main challengers to Leeds and West Brom for promotion, and Sabri Lamouchi has moved in January to bolster their strike-force.

It is a wise move, too. Forest have been extremely reliant on Lewis Grabban this season, and only two sides in the top half of the Championship have scored fewer goals than them.

Da Costa, 28, scored 14 goals in 74 Ligue 1 appearances for Strasbourg, helped them win the French League Cup last season and secure qualification for this season's Europa League, and even netted against the mighty PSG in 2018/19.

Lamouchi would have watched the striker play in France during his own time in charge at Rennes, and will hope he can provide the competition and support for Grabban that will help end Forest's 21-year wait for Premier League football. Another intriguing loan signing from a big Premier League club, Smith Rowe had 10 Arsenal appearances under his belt, and a few on loan for Bundesliga side RB Leipzig last season, before joining Huddersfield.

Still just 19, the midfielder has notched three goals already for Arsenal, netting twice in the Europa League group stage last season against Qarabag and Vorskla Poltava, and once in the Carabao Cup against Blackpool.

He has also appeared for England at every level from Under-16 to Under-20, winning the Under-17 World Cup in 2017. Mikel Arteta, who has utilised several young players already since taking charge at the Emirates, will be keeping a keen eye.

"We wanted to bring in some enthusiasm and energy and quality at the top end of the pitch and being able to bring in Emile Smith Rowe - for us, we see him as the most exciting young attacking player in English football," said Huddersfield boss Danny Cowley.

"He has played quite a lot of football - a lot of U23s football - and a good number of first-team games for Arsenal as well. So we are really pleased to be able to bring him in. I have to say we are thankful to Arsenal." 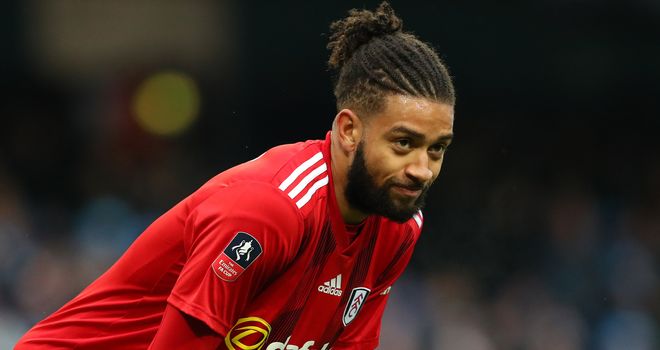 Hector is now 27 and has spent the vast majority of his career on loan. He made seven separate moves from Reading between 2019 and 2015, before joining Chelsea and making four temporary switches from Stamford Bridge.

Finally, it appears the centre-back has found a home at Fulham. Hector initially agreed the move in early September, but had to wait until the new year to play.

His impact has been felt already, though. His debut saw a 2-1 win over Aston Villa in the FA Cup, and in three Championship appearances so far, Fulham have registered three clean sheets.

He has added steel to Scott Parker's back-line, and been vital at a time when goals are lacking due to the injury absence of striker Aleksandar Mitrovic. With him in defence, Fulham have a real chance of promotion. Hull City have a huge gap in their side following the departure of Kamil Grosicki and Jarrod Bowen - arguably their two most important attacking players - so have moved for the League One's creator-in-chief.

Now 26, Maddison scored or assisted more than once a game in League One for Peterborough, netting 52 goals and 71 assists in 212 appearances. Charlton were also after him, but Hull are the side that got him through the door on loan.

Initially moving from non-league Gateshead in 2014, Maddison will link up with Grant McCann again, who was his boss at Peterborough from 2016 to 18. It will be interesting to see if he can make the step up to the Championship.

"It's been an eventful 17 or so hours but everything has come together quite nicely. I'm happy to have joined such a big club and I'm just excited to get going now," said Maddison after signing.