In an exclusive interview with Sky Sports, the Chelsea boss talks recruitment vision, tactics and closing the gap to the top. Watch Liverpool vs Chelsea live on Sky Sports from 8pm; Kick-off 8.15pm Frank Lampard knows what it feels like to lift four stone of solid sterling silver.

At around 10.30pm on Wednesday night, on a makeshift podium in Liverpool's famous, if lamentably empty, Kop, Jordan Henderson and his team-mates will do what Lampard did three times between 2005 and 2010.

The Chelsea boss will have no hesitation in sanctioning a guard of honour for Jurgen Klopp's imperious side. He may even stick around to see the Premier League trophy thrust into the night sky by red instead of blue shirts. And he has admitted he will not stop any of his players from looking in because, yes, he says, "they should be inspired". Ahead of the sides' meeting in front of the Sky Sports cameras, a serial winner speaks repeatedly of his "huge respect" for the new champions of England.

But a ticker tape scene, whatever the game's outcome, will only serve to further sharpen his own focus, his own ambitions for a Chelsea side who have been used to finishing above the Reds in the Roman Abramovich era.

The trip to Merseyside marks the first of what Lampard has described as three domestic finals. Wembley beckons again after that striking FA Cup victory over Manchester United but first come crucial Premier League games against Liverpool and Wolves as the Blues seek the single victory that would guarantee a top-four finish and Champions League football next season.

What appeared a season of transition now promises to yield more than many - fervent Chelsea supporters and intrigued outsiders alike - expected in Lampard's first season as a top-flight manager. 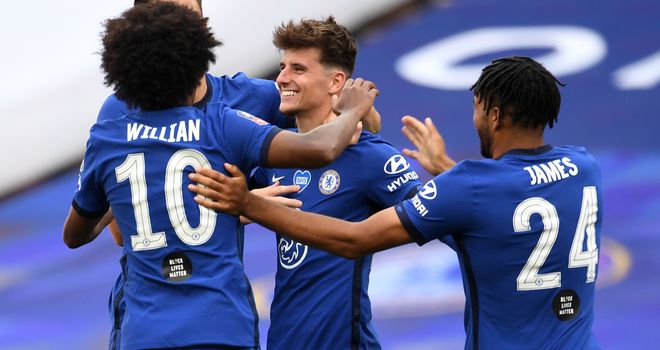 Mason Mount and his Chelsea team-mates celebrate at Wembley

Despite the loss of Eden Hazard's hypnotic feet and 16-goal haul, a talented squad undoubtedly remained at his disposal. But the club legend, still a rookie manager, admits there have been "testing moments" as he has sought to navigate a transfer ban, nurture young hopes and find his own way in the Stamford Bridge dugout rather than on its familiar turf.

"It does feels like progression, what we've done so far," he tells Sky Sports in an exclusive interview ahead of Wednesday's clash.

"Expectations for us were mixed at the start of the season; there were some unknowns in terms of the squad - I had players who were making their debuts in the Premier League - and I just wanted to see where we could get to.

"We've made some really good steps forward but then we have to think of the next one because we're Chelsea. We understand at the moment that the gap in the league is big above us and we want to close that." 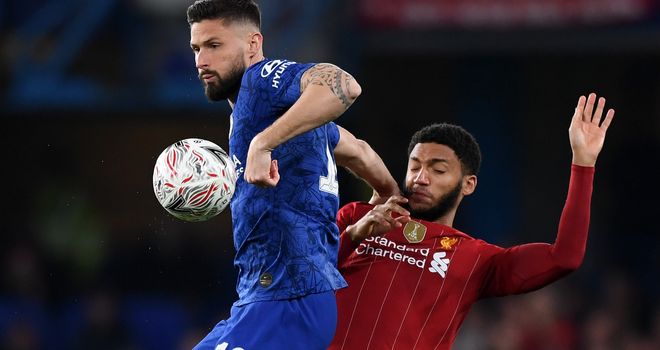 It is no easy task.

Though Liverpool have laboured since that first league title in 30 years, celebrations leaving minds and bodies weary, they are ahead of Chelsea in the table by as many points as barren years. A 15-point lead over runners-up Manchester City is chasmic enough. Mikel Arteta has labelled the gulf to his own Arsenal side "enormous".

Beyond the Premier League, February's 3-0 defeat to Bayern Munich in the last 16 of the Champions League was another stark reminder of an arduous route back to life among Europe's elite.

Lampard is realistic, not least because other rivals through shifting sands of their own are starting to find their feet. His side, he says, remain a work in progress; a team at a "different point in the curve" to those at the summit.

There have been moments, plenty of them, that have underlined the potential of a group still developing as individuals as well as a collective: victory at Ajax in the Champions League group stage, a famous double over Tottenham, a battling, streetwise win over Man City last month that, as it happened, sealed it for Klopp's side. Lampard's youthful side have created more chances than Liverpool over the season so far and match them for expected goals.

But there have been error-strewn displays and defensive shortcomings, too; games in which his side have been physically and mentally overwhelmed like the recent 3-0 dismantling at Sheffield United, and others where they have been devastated by swift counter-attacks. Chelsea have conceded 49 Premier League goals this season - more than any other side in the top half - and the worst differential when it comes to expected goals against than any team in the division. It is Liverpool's consistency, their relentless brilliance with minimum fuss, that Lampard hopes to cultivate alongside an identity he insists must avoid pastiche.

"They've been working together for a while now, Liverpool, and the thing that jumps out at you is their consistency. I know how hard that is. You don't see that sort of consistency, in terms of performance and results, in many Premier League seasons.

"The have speed, power, individual qualities all over the place. It's always impressive when you see a team that plays in the image of their manager, with character and aggression. You can see the evolution since [Klopp] has been there.

"But it's not a case of trying to clone Liverpool. We have to try and do it in our own way to close the gap."

"It's always impressive when you see a team that plays in the image of their manager, with character and aggression. You can see the evolution since [Klopp] has been there. But it's not a case of trying to clone Liverpool. We have to try and do it in our own way to close the gap."

The transfer market is fertile ground once again as Lampard looks upwards.

Timo Werner, a £49m arrival from RB Leipzig, and Hakim Ziyech, signed at a cost of almost £38m from Ajax, are exciting attacking arrivals for a side that has struggled at times to convert dominance into goals. Bayer Leverkusen's Kai Havertz is the subject of a reported £70m Blues bid, while goalkeeper Dean Henderson has been linked with a move to Stamford Bridge amid the suspicion that misgivings linger over Kepa Arrizabalaga.

Lampard is committed to improving his existing crop and while he knows the power of Champions League football when it comes to attracting players, his recruitment vision is bound by a common thread. 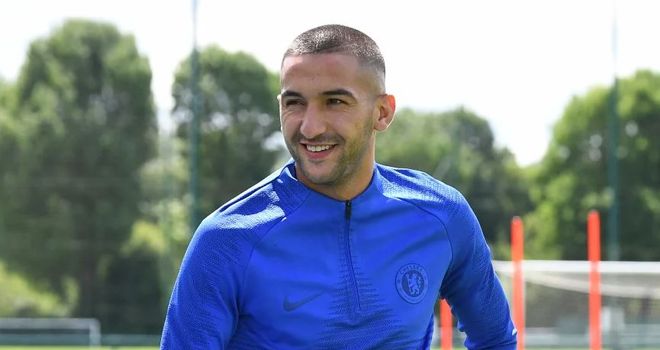 "You should never as a coach turn away from what you can do with the players you have on the training pitch - searching for that individual improvement is how you'll get collective improvement - but of course you're looking to improve when you dip into the world of recruitment. There's a balance.

"It's not easy to scout for the actual talent - there's an art to that - but I like the idea of players coming here who have a character, a desire, an attitude to come and work to be a success at Chelsea; not just to pass through, not just to come and see what happens, not to come here because we're in London," he says.

"I want them to want to be part of a really strong team that wants to go places. Of course we want talented players but I want individuals with that mindset. Mount has impressed in his first Premier League season

"Most of the things I've been involved in in football that have been good have had characters; people with desire to be winners."

He is thinking of the likes of John Terry, Didier Drobga, Michael Ballack, Petr Cech of course; the totemic figures from Chelsea's Naughties pomp who oozed authority, who provided the mental "robustness" that Gary Neville recently cited as an area for improvement at Stamford Bridge.

From coaching older heads like Marcos Alonso and Olivier Giroud through adversity to hardening youngsters such as Mason Mount and Callum Hudson-Odoi, Lampard knows there are gaps to be bridged psychologically.

"It's a lot to ask a younger player to step straight into the team and be a driving force of the team. There has to be a bit of development there. We're trying to develop leaders and a strong group mentality but you hope it also grows naturally itself."

A back three against Manchester United in the FA Cup offered increased stability and while Lampard admits he is keen to foster the sort of tactical identity that Wednesday's opponents possess under Klopp, he will, for now at least, stay flexible with formations.

"The learning process, tactically, is never-ending," he says. "The moment you think you've cracked it and think you know how to defend set-pieces, you'll concede one. You can get it right one day against a team who counter quickly and feel very differently another. There are lots of small changes we're trying to work on but the one thing I've learned is to try and stay calm and focused in terms of what I'm trying to do.

"You can't fluctuate because of one team or individual performance. You have to be positive in moments where it hasn't gone right and believe, in the long run and with the talent we have, that we'll go in the right direction.

"Games can put obstacles in front of you but I don't want change to be clever or change for change's sake. I would love to get stability in terms of the way we play. Teams like Liverpool, Manchester City have that - it takes time with the players and the balance of the squad and the message that you're trying to get across.

"But I'm open [tactically] because the only thing that matters is winning games. People won't look back and say, 'Well, you played three at the back in that game, four in that one'. It's about finding the right way."

Chelsea found their way to the top four back in mid-October and have stayed there since. Lampard is adamant that failure to reach the Champions League positions would not have been the sort of black-and-white failure that modern football culture is inclined to declare but now, the prized spot is "theirs to get over the line". Lampard scores for Chelsea at Anfield in May 2010

There can be confidence for his players to take from victories in both cups, from a European Super Cup that went to penalties and a narrow defeat at Stamford Bridge. Lampard himself can be stirred and has plenty of his own Anfield memories.

"Liverpool have done incredibly well this season; we really respect everything they've achieved. I know what a formidable team they are and what an incredible manager they have. The fans won't be there but Anfield is always difficult because of the feeling of the place.

"It's a big test for us but we have to see it as a challenge. We have to go up against them with belief in ourselves because we've shown it this year already in the way we've played against them.

"The trophy lift? I've not mentioned it to the players. That's one thing I think behind-closed-doors games has done - focus the mind on the job in hand."

The gap right now feels cavernous but Lampard is focused: on the job in hand and the job ahead.