Promoter Eddie Hearn expects an investigation to be held into a judge after Ryan Burnett's split decision victory over Lee Haskins on Saturday night.

Burnett became the new IBF bantamweight champion after flooring Haskins twice in a dominant points victory in Belfast, despite a bizarre scorecard from American Clark Sammartino, who inexplicably handed in a 118-108 total for the Bristol man.

Hearn claimed that Sammartino had asked a cameraman to confirm the identity of the two fighters and believes the result will be reviewed by the IBF and the British Boxing Board of Control.

"Thankfully we got the decision, but when we looked at the scorecards we realised that the judge in question, the American Clark Sammartino had actually scored the fight the wrong way round," Hearn told Sky Sports News HQ.

"We knew this by the 10-8 rounds and luckily we had those 10-8 rounds, because otherwise there is not necessarily a way of telling.

"He scored the two 10-8 rounds to the guy who had been knocked down, so again quite amusing at the time, because we got the win, but actually very serious. 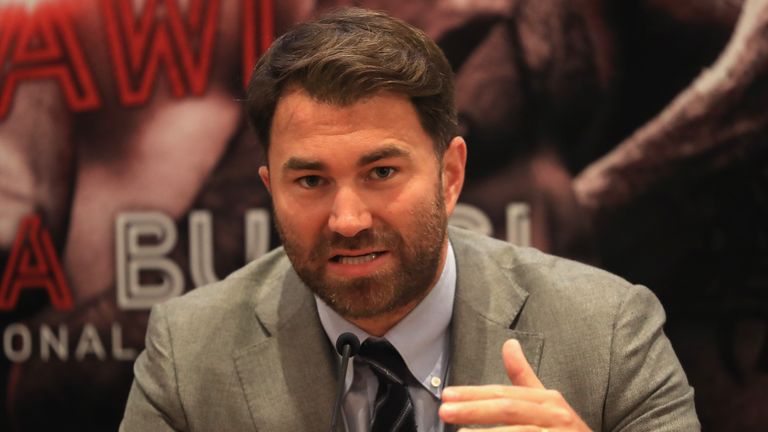 Frightening, but we got the win, and I'm sure the British Boxing Board of Control and the IBF will make their own investigations

"You have to think that the future of these fighters and the livelihood of these fighters is in the hands of these judges and I don't want to be disrespectful to Clark Sammartino, he's scored many fights over a long period, but it's particularly worrying, especially when we find out that he was asking our cameraman on the night during the fight which one was Lee Haskins.

"He was told in the red corner and he scored the fight to the guy with the red shorts on. Frightening, but we got the win, and I'm sure the British Boxing Board of Control and the IBF will make their own investigations."

British Boxing Board of Control general secretary Robert Smith has already suggested that Mr Sammartino will not officiate again in this country.

"I can tell you one thing - [Sammartino] will not be coming back to this country, and I will make sure the IBF are told of that," said Smith.

"There's only one winner tonight, and I think Mr Sammartino and Mr Haskins will understand that. It's just disappointing. It was a good fight and this has kind of ruined it a little bit."