"Anybody that fights against me, it's going to sell, so I expect my name to be on everyone's hit list"

Ohara Davies wants his name to be mentioned amongst the world's best, but firstly plans to crush the ambitions of Tyrone McKenna in The Golden Contract final.

The Hackney man stopped Jeff Ofori in last month's super-lightweight semi-finals to set up a grudge fight against Belfast's McKenna, with the winner securing a lucrative multi-fight deal in the MTK Global tournament.

Davies admits he still needs to refine his skills with new trainer Angel Fernandez, but is certain that his combination of explosive power and outspoken antics will make him a wanted man in the 140lb division.

"You've got all these big names in the super-lightweight division, and I'm glad and I'm happy that I can be one of the best," Davies told Sky Sports.

"I might not be the best, but I'm named amongst the best, and my goal is to get there one day. 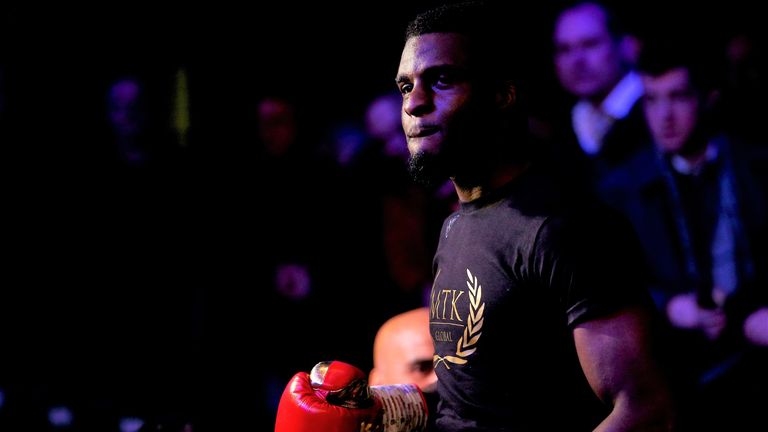 I don't just think 'I want to fight for a world title', and then go in there and get beat. I want to win

"To be honest, I'm a name, and people want a name. Everybody wants to beat a fighter that's known, that's talked about or got a personality. Anybody that fights against me, it's going to sell, so I expect my name to be on everyone's hit list.

"I win this tournament and I think I'll be two fights away from a world title. Even if I'm one fight away, I still believe I need to improve and learn more to up my chances of getting a victory.

"I don't just think 'I want to fight for a world title', and then go in there and get beat. I want to win. I've still got a long way to go, a lot to learn, but I've got a good coach in Angel Fernandez in my corner."

McKenna reached the final with a hotly disputed points win over Mohamed Mimoune, a decision that surprised Davies, who fully expected to face the Frenchman.

The feuding duo will finally share the ring in a career-changing fight and Davies believes his bitter rival has only condemned himself to a humiliating loss.

"We're not hearing the final bell in that fight. Tyrone McKenna is going to get knocked out," said Davies.

"After watching that fight, Tyrone McKenna should be thanking the gods above him. How he got that win, there was definitely somebody looking down on him, saying this is your destiny.

Who's excited to finally see this fight in the super-lightweight final?

"This is your destiny to fight against me, a fight that he's been chasing for so long. He's been granted his wish and now he's going to get knocked out.

"I sat down in round two. I started watching it and I was thinking Tyrone McKenna has lost this fight, so I was looking at the other guy, trying to analyse how he fights, and trying to see his weaknesses.

"I didn't really get a chance to look at Tyrone McKenna, because I was thinking, 'there's no way he's going to get this win.'"