Britain's heavyweight star gave a glimpse of his destructive skills when Hearn visited Joshua's headquarters in Sheffield on Wednesday, with his WBA, IBF and WBO title defence against Kubrat Pulev edging closer on December 12, live on Sky Sports Box Office.

Pulev has defeated Derek Chisora and Hughie Fury since his sole defeat against Wladimir Klitschko, back in 2014, but Hearn believes Joshua intends to inflict a crushing loss on his IBF mandatory challenger. 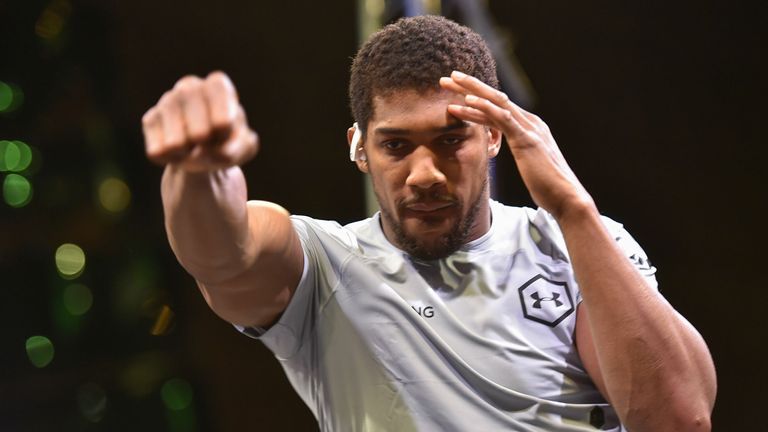 I think this is going to be a tough fight against Kubrat Pulev. I also think he is going to absolutely destroy him.

"He's moving so well. We know he's brought in a couple of new trainers with Rob McCracken leading the way.

"He's learning, he's punching so hard, so sharp, so fast. I think this is going to be a tough fight against Kubrat Pulev. I also think he is going to absolutely destroy him.

"I think he's going to break him down, he's going to dissect him, and he's going to punish him. I think you're going to see a statement. I don't want to put too much pressure on him, but I really do. That's what I think.

"AJ will always be a relaxed, humble guy, but I really believe having seen the improvement that he's made, the spite in his punches, I think you're going to get a thrilling display from Anthony Joshua."

But Hearn admits that Joshua must firstly produce an explosive performance against Pulev, without the backing of a huge crowd, as he attempts to secure a showdown with Fury in early 2021.

"I'm nervous, it's behind closed doors, he's never experienced this before in the pros," said Hearn. "He's used to walking out in front of 90,000, twenty yards from here [Wembley].

"This is a different kind of challenge, this is the acid test before the big one.

"All he's got to do is beat Kubrat Pulev and I really believe he's going to do it in brilliant style and prove to everyone he's the best heavyweight in the world."