Bradley Rea on his emerging threat to middleweight division: 'More people are going to sit up and take notice'

Bradley Rea: "A lot of people will look at me and think, ‘Tall, skinny, ginger kid. Not up to much.' But I can fight, I really can fight" 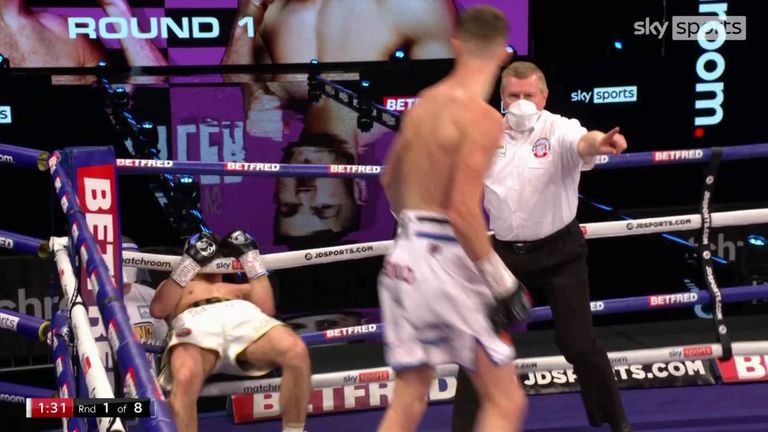 Bradley Rea says he is the 'secret' threat at middleweight, but believes British rivals already know about his brutal intentions after a blistering stoppage win.

The 23-year-old displayed his ruthless instincts by flooring Lee Cutler on three occasions during a first-round victory in March, and he returns on this Saturday's Hughie Fury vs Christian Hammer bill, live on Sky Sports.

Rea is a rising contender in a domestic division which also includes world title challengers such as Chis Eubank Jr and Liam Williams, but he intends to enhance his reputation with another stunning victory.

Now he has the stage to show off his skills🎥🙌

"It hasn't been easy, but I'm finally ready to break out now," Rea told Sky Sports.

"My last fight, a lot of people didn't know who I was, but they realised the secret was getting out. Definitely over the next couple of months, more people are going to sit up and take notice.

"I'm big at the weight. Had a good win last time. There's some top people in the division, some great fights to be made.

"I think I'm quite deceiving. A lot of people will look at me and think, 'Tall, skinny, ginger kid. Not up to much.

"But I can fight, I really can fight. I can mix my styles up quite well. I'm always in entertaining fights, no matter what."

With a 10-fight unbeaten record, Rea is edging closer to a title fight, and he plans to hunt down the current champions.

"It's exciting, because I'm just getting to the point now where I'm being mentioned with these other lads," he said.

"Before that, I wasn't really, I was a step down. But they will be looking at me, will have one eye on me, and may be a little bit worried.

"Since I was eight-year-old, I wanted the British title. It's been a dream of mine. That's what the aim of the next few years is. I want to pick up titles on the way. I like the idea of going that old school route. English, British, Commonwealth.

"Whoever has got them titles, whoever is in the way, I'm happy to make those fights."

As one of Manchester hottest young talents, Rea is eager to emulate the achievements of Ricky Hatton and Anthony Crolla who attracted legions of fans with their dramatic title victories.

"That's been my dream since I was a little kid, boxing at a sold out Manchester Arena," said Rea. "I've managed to tick it off the list.

"I really do think I've got a style that people can get behind and build a bit of a following. Hopefully one day we can just sell the place out like Ricky and Ant did."