Richard Riakporhe has more than 'raw' knockout power as he hunts down a world title, says promoter Ben Shalom

Richard Riakporhe can stay on course for a world cruiserweight title fight if he beats Olanrewaju Durodola on next Saturday's BOXXER bill, which also features the pro debut of Caroline Dubois and Florian Marku 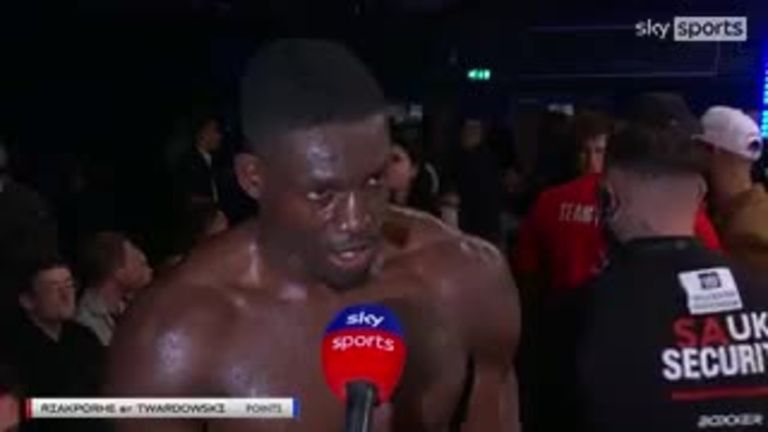 Richard Riakporhe intends to burst onto the world title scene

The cruiserweight knockout specialist returns to action against Olanrewaju Durodola at The SSE Arena, Wembley next Saturday, live on Sky Sports.

"He only turned pro at 25, he took fights early and he bulldozed through the division," BOXXER promoter Shalom told Sky Sports.

"He didn't really box like he could. He was learning on the job.

"Now he's with Angel Fernandez he is learning the craft. Before it was about his raw power.

"What makes him exciting is that he's now learning how to box - if he can add that to his natural ability? This is why we are excited about him.

"He's beaten them without much preparation."

Riakporhe ended a two-year absence from the ring by winning an eight-round decision on his comeback, but will be thrown into a dangerous contest against Durodola, a 44-fight veteran who has faced current world champions Mairis Briedis and Ilunga Makabu.

"Under normal circumstances there would be no problem but Richard had been out of the ring for two years," Shalom said.

"You saw that in his last fight, which was tough.

"But he's 31 now and has dealt with the British scene. We made a commitment to him to take him to world level.

"It's a tough fight and I've told Richard to prepare for it. He's only had six weeks [since his previous fight].

"This is a big fight for him, and it's one that takes him onto the world scene.

"But it's one that I think he will take care of."