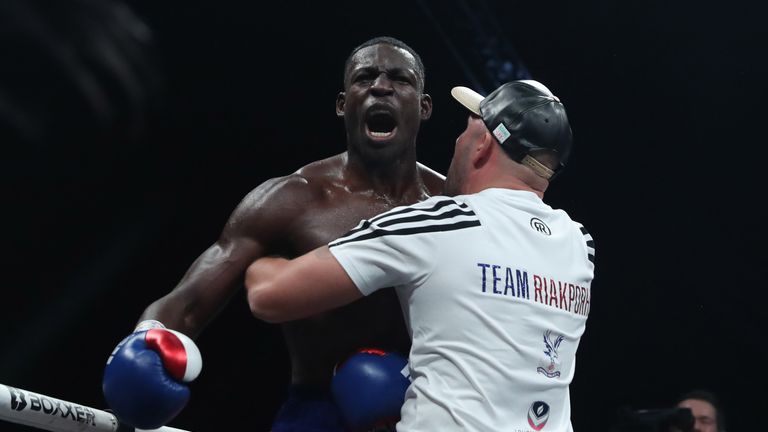 Richard Riakporhe smashed Olanrewaju Durodola with an emphatic knockout on Saturday in London to tee up a future world title fight.

The undefeated power-puncher delivered a statement performance by wiping out his experienced visitor inside five rounds.

Riakporhe is now the mandatory challenger to the WBC cruiserweight championship - held by Ilunga Makabu, who is set to first be challenged by Saul 'Canelo' Alvarez.

Riakporhe shoved back and imbalanced Durodola inside 10 seconds of the opening bell on Saturday, and the visiting fighter immediately looked at the referee for validation.

Riakporhe ended the first round by hurting Durodola and barrelling him into the ropes.

First, a lead right hand landed flush then a flurry of follow-up shots did the damage.

A powerful right hand and a nasty left hook to the ribs by Riakporhe had Durodola hurt again in the second round.

Durodola, the 44-fight veteran who had faced world champions Makabu and Mairis Briedis, felt his legs wobble in the third and fourth rounds under siege from Riakporhe.

A swift left hook by Riakporhe put Durodola on the canvas inside the first few seconds of the fifth round and the next onslaught prompted the referee to intervene.

Riakporhe now owns the WBC silver cruiserweight belt and is the mandatory challenger to the full title.

The governing body have given Canelo the chance to challenge their champion Makabu, in a shock raid of a fifth division for the Mexican superstar.

Makabu was knocked out by Tony Bellew at Goodison Park in 2016 but has rebounded to win the WBC title.