Tyson Fury weighed in heavier than Derek Chisora for Saturday's WBC heavyweight title fight; neither man wanted to break off from their staredown; "It's going off. Just expect carnage," Fury declared 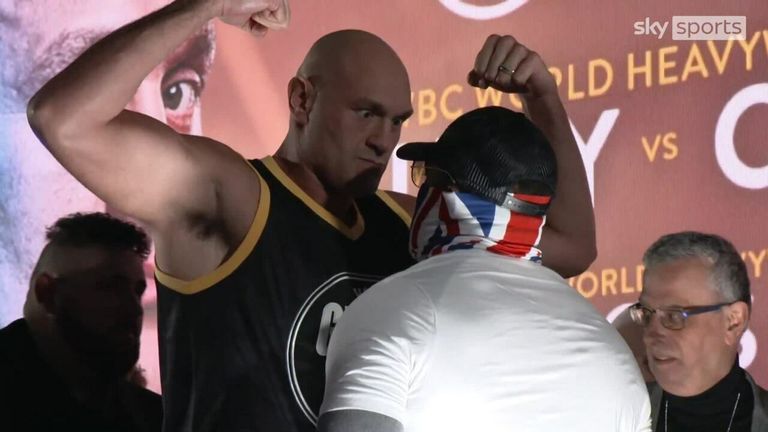 Tyson Fury and Derek Chisora will meet each other in the ring at the Tottenham Hotspur Stadium in London on Saturday night.

Their final act before the fight was to take to the scales at the Business Design Centre in Islington in front of a crowd of supporters on Friday.

Chisora took his time to process slowly in and held his arms wide as he weighed in, taking in the moment. "I'm buzzing, I'm excited," he said afterwards.

Fury arrived with a smile and strode in to his own rendition of 'Sweet Caroline' for a charity single.

Fury's size advantage was apparent as he weighed in. At 6ft 9ins tall Fury, the WBC heavyweight champion, towered over Chisora.

The smile dropped off Fury's face when he came head-to-head with Chisora. Fury glowered down at his challenger. But masked in a Union flag, sunglasses pressed close under his hat, Chisora's expression was unreadable.

Neither wanted to break away from the staredown. An official held a piece of paper between their faces and even that didn't persuade them to move apart.

Finally they broke off and turned back to their supporters. Over the course of three fights, they have faced off plenty of times before. "He turned away as usual," Fury would crow afterwards.

But Chisora declared: "It's going to be electric.

"This is not a job for me, this is a hobby and I love doing my hobby every day."

He reiterated his call once again for "the best first round in boxing history".

If they do start quickly, their bout could become explosive.

"Tomorrow, it's going off. And guess what's happening Sunday? It's coming home!

"Tomorrow night we throw down again and we're going to put on an absolutely brilliant fight.