Joshua vs Whyte: Anthony Joshua may turn nasty as he prepares for bitter rival Dillian Whyte

Anthony Joshua is an Olympic champion and the darling of British boxing - but are we about to see a different side to him?

Sky Sports pundit Glenn McCrory recently suggested Joshua is transcending the sport and attracting the interest of the wider public primarily via physical appeal. The former world champion even hinted that the heavyweight sensation's imposing figure and winning smile has the female population hankering after tickets to his fights.

In the build-up to December 12's clash with fellow Londoner Dillian Whyte, the 26-year-old Joshua (14-0-KO14) has so far been a model of restraint and a master of subtle put-downs in the ongoing verbal war.

Whyte boasts a 2009 amateur victory over Joshua and after the pair fell out over Joshua's reaction to Whyte's drugs ban, the Brixton fighter has laid into Joshua in interviews, at press conferences and on social media at every opportunity.

When Whyte offered Joshua out for some good old-fashioned fisticuffs when the pair found themselves in the same gym, Joshua's response was calm and measured - but even his promoter Eddie Hearn expects the Commonwealth champion's cool exterior to catch fire soon.

To assess Joshua's character is tough. By his own admission, the Watford heavyweight has a checkered past and a criminal record - but this was all consigned to the history books when he won British hearts by seizing super-heavyweight gold at the 2012 London Olympics.

While there's no doubt that the 'golden boy' reputation Joshua earned by smiling his way to Olympic glory in his hometown remains, there's a chance that Whyte's relentless taunting and the fact that the underdog seems genuinely unafraid of Joshua physically is likely to result in flashpoints that show a darker side. 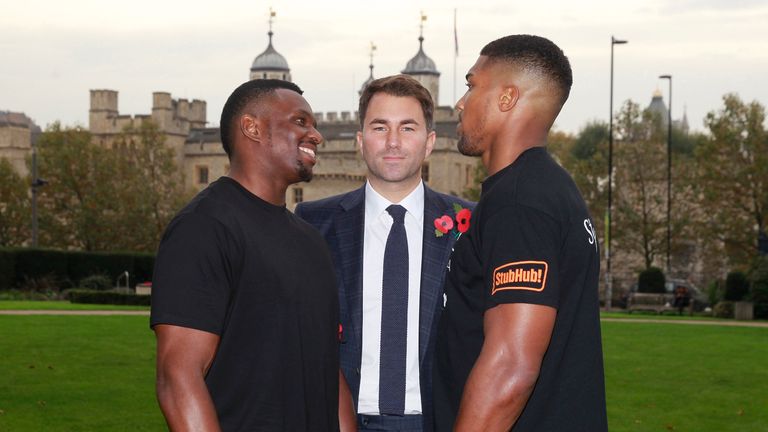 You're going to see the sides of Anthony Joshua as opponents, situations and confrontations develop. He has an obligation to be a great ambassador but, unfortunately, it's the fight game

Hearn, perhaps understandably given Joshua's blue-chip marketability on the back of a boy-next-door image, seems slightly regretful over the situation. "You're going to see the sides of Anthony Joshua as opponents, situations and confrontations develop," said the Matchroom promoter. "He has an obligation to be a great ambassador but, unfortunately, it's the fight game."

Whyte's own opinions of Joshua's character appear to vary. When looking to shatter the positive perception of Joshua, Whyte branded him "a drug dealer from Watford" and "a scumbag." However, later in the saga, Whyte insisted: "If people say Anthony Joshua is a bad man with a ruthless side to him, I'm saying he's no bad man. He's a good boy."

The truth is, Joshua's personality is something of a mystery. He may well have been well versed in media training but beneath that veneer seems to lie a genuine desire for privacy. Letting fists do the talking would generally be considered incongruous with the showbiz and promotional DIY aspects of boxing, but when the fists are talking as loudly as Joshua's, maybe you get a pass.

If there is a blue touch paper available for lighting, you can be sure Whyte will bring a flame-thrower. If Joshua's "you're lucky to be on my undercard" jibe was an accurate shot from a patient sniper, Whyte will carpet-bomb and scatter-gun wherever and whenever he can.

It's widely accepted Whyte represents Joshua's sternest test to date and poses a genuine threat to his unbeaten record. But in the build-up, during the fight and after it, Joshua faces a different test and a potential threat to his reputation outside of a boxing ring.

Joshua vs Whyte is exclusively live on Sky Sports Box Office, December 12, and is now available to order via your Sky remote or online.