Joshua vs Parker: Joseph Parker says he will show Anthony Joshua can 'be beaten'

Joseph Parker has dismissed Anthony Joshua's "unrealistic" claims and insists he will beat the Brit because "he's not a god".

The WBO heavyweight world champion was responding to Joshua's suggestion that no human can beat him, ahead of their unification fight on Saturday, live on Sky Sports Box Office.

Parker and Joshua went face to face at the Sky Central press conference and the New Zealander made it clear that he will prove the favourite wrong. 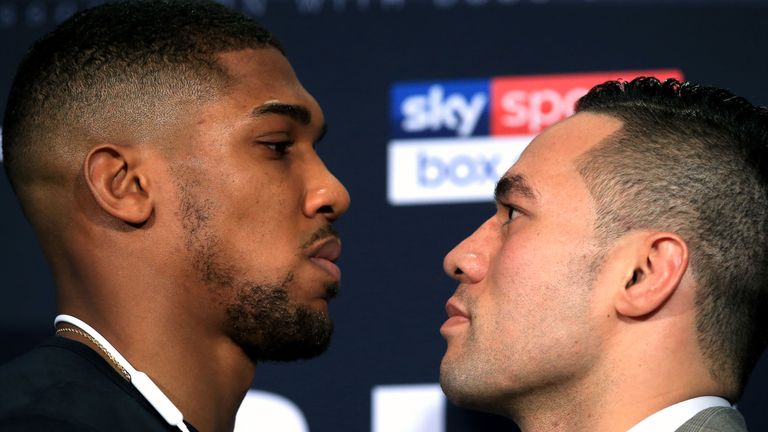 Of course he can be beaten, he's not a god, he's a human being - and I am going to show that on Saturday night

"I am a champion. I am here to take his belts back, so if he sees that as a stepping stone or a change in his life then it's up to him, whatever he thinks," Parker told Sky Sports.

"But I am here to take his belts back home, for myself, for my team, for my family and country. That's it."

When asked about Joshua's remark that no human can beat him, Parker said: "You can say it's arrogance, but it is not realistic. Of course he can be beaten, he's not a god, he's a human being - and I am going to show that on Saturday night.

"And if I do and he tries to recover, I am not going to give him the chance to recover. I am going to chase him down and get him out of there."

'No human can stop me'

Remember what Joshua said at the first press conference?

Joshua is the strong favourite for the first heavyweight unification fight to take place on British shores and believes he will knock the visitor out.

Parker, though, made it clear he has more to his armoury than the renowned chin and knockout power.

"Listen, we are here for the challenge," Parker added.

"We love challenges and whatever he brings, we're going to be better.

"We've trained hard for this fight, prepared and like I said, I am confident. I will be surprised if he can catch me."