Prograis vs Taylor: Derek Chisora calls for a clash with Oleksandr Usyk

Derek Chisora has called for a clash with pound-for-pound star Oleksandr Usyk if he defeats David Price in this weekend's bumper British battle at The O2.

Chisora faces Price in a big domestic clash on the Regis Prograis-Josh Taylor bill at The O2 this Saturday, live on Sky Sports Box Office, as he targets his third successive victory at the venue this year.

Another big-name bout could be in touching distance for Chisora, who has already singled out Usyk after the former undisputed cruiserweight king marked his debut in the division with a stoppage of Chazz Witherspoon earlier this month. 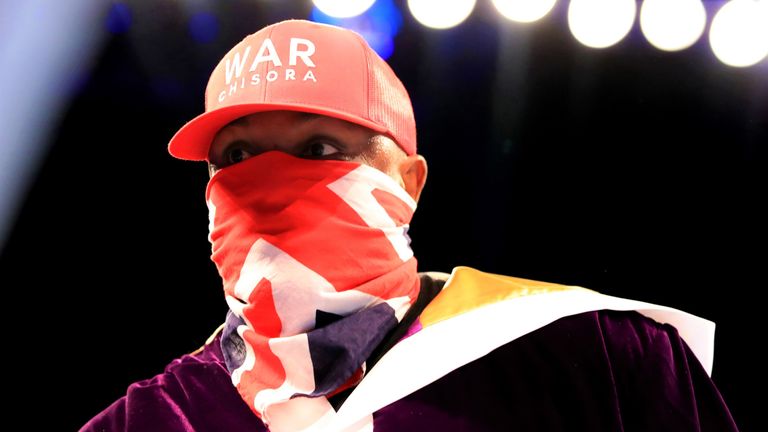 Forget the juggling balls and dancing. Nobody wants to see a dancing show.

Chisora has been unimpressed with Usyk's pre-fight displays of agility, telling Sky Sports: "Him and his team they need to stop juggling balls, it's not a circus.

"Come and do what you need to do. Forget the juggling balls and dancing. Nobody wants to see a dancing show. Come Dancing with the Stars? This is a boxing match.

Price stepped in as a replacement opponent after Joseph Parker withdrew due to a suspected spider bite, but Chisora will not alter his normal all-action style for the Liverpudlian.

After his demolition of Artur Szpilka in the summer, Chisora intends to deliver another memorable victory for his vociferous hometown support.

"I'm excited," he said: "I'm back at The O2 Arena, buzzing. Boxing this year for me has been amazing. I'm just excited for this fight.

"Home of boxing, O2 Arena. I've worked hard to get that off the fans, and I really appreciate them for embracing me and loving me, so I have to come and deliver.

"We box the same way. If you understand the way I fight and the way I box, it's pressure, pressure. Bring it to the other guy and that's what we're doing."

Watch the WBSS final and Chisora vs Price on Saturday, live on Sky Sports Box Office, from 7pm. Book it via your Sky remote or book it online here. Even if you aren't a Sky TV subscriber you can book and watch it here.