"No, another minute wouldn't have helped him, because I'm brutal"

Carl Froch says George Groves was incapable of knocking him out, even if his former rival had received more time in the opening round of their first fight.

The British super-middleweights shared two memorable world-title fights, with Froch emerging with stoppage wins on both occasions, but Groves believes he could have pulled off a sensational knockout in their original meeting in Manchester.

After flooring Froch in the first round, Groves questioned whether he could have finished the fight, telling Sky Sports' The One That Got Away podcast: "I'm not taking anything away from him, but I definitely would have liked another minute - I probably would have put him away."

Froch has swiftly denied this suggestion, insisting that Groves landed his biggest punches after the knockdown and still could not finish the fight.

"I think it was funny what he said," Froch told Sky Sports. "He's quite a character, I enjoyed it, but that thing about knocking me out was nonsense.

"What else is he going to do? He hit me with loads of shots after that. I went back in swinging like an idiot, missing.

"He beat me to the punch and hit me with about five or six absolute peaches of punches. He couldn't have caught me any sweeter after the knockdown, and I was still stood there.

"One minute doesn't give you the time to recover, that's not enough. Then I had rounds two, three, four, five and six, which he landed loads of shots on me. It gives me a headache watching the replay actually.

"No, another minute wouldn't have helped him, because I'm brutal. So tough and strong and I recover quick, I've got a granite jaw. I am 'The Cobra.'" 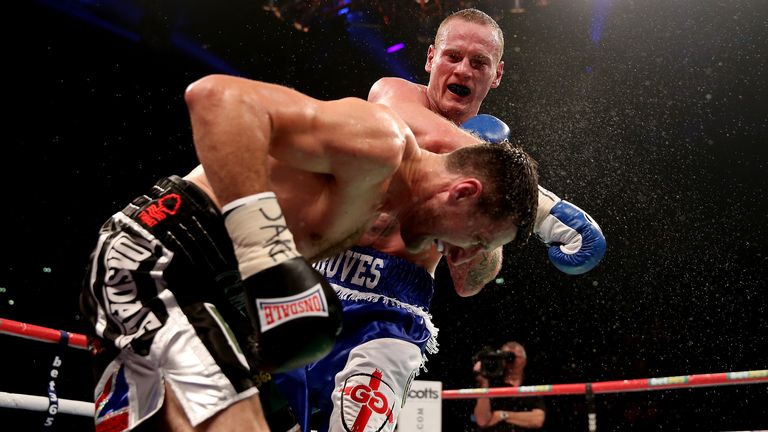 He couldn't have caught me any sweeter after the knockdown, and I was still stood there.

Referee Howard Foster controversially signalled a stoppage win for Froch in the ninth round, prompting an angry outcry from Groves that led to their Wembley rematch.

But the former WBA and IBF champion remains certain that Groves was on the brink of defeat.

"He emptied his tank in that sixth round and I had my successes as well when I watch it back," said Froch.

"I landed a few myself, but he did beat me to the punch, and he did have a lot more success than me (in the sixth round).

"Never ever needed saving in that first fight."

"He went back to his corner at the end of that round, absolutely shattered. I knew he was gone. He couldn't budge me and he knew he couldn't do anymore.

"I was getting my second wind. I had recovered from the first round knockdown. I was catching him, he was tired.

"The referee done him a massive favour, I'll always stand by that. What a perfect intervention by the A-star referee, that is Howard Foster."