Ricky Hatton's first professional opponent casually read a newspaper while the teenager rehearsed spiteful punches, anxiously awaiting a debut that ended in a blur of aggression.

The Mancunian's finest moment of fulfilment would come nearly eight years later, with Hatton collapsing on his back in elation following a brutal world-title triumph against Kostya Tszyu.

But Hatton's maiden fight in the paid ranks had been staged at a leisure centre in Widnes. The pale-faced prospect threw frustrated combinations in preparation after his bout was pushed back 45 minutes following the main event.

📺 Ricky joins us tomorrow on The Boxing Show as we relive this classic
📅 2pm @SkySportsNews pic.twitter.com/X49qYIgwLY

Colin 'Kid' McAuley, a Merseysider with a reputation for resilience, had been entrusted with the job as Hatton's opening foe, and outwardly appeared to have little concern while he idly flicked through a few articles.

But McAuley recognised the hurtful assignment ahead of him, as Hatton bristled with aggression during his pre-fight routine, just a few yards across the canvas.

"That was horrible the wait, because you've got him warming up the other side of you, and you can tell that's going to be a big fight."

Any trace of trepidation had to be blanked out by McAuley in his daily occupation, even before he spent evenings in the opposite corner to some of Britain's most hurtful punchers.

"At that time, I had a bit of a double life going on really. I worked on the unit for people with a personality disorder, to try and straighten them out a little bit more.

"It was tiring, because we had to do a lot of studying and a lot of interviewing people. But then I had to train again at night.

"Ian Brady, he was in the next ward to us. We crossed paths, but he wasn't on our therapy unit."

📺Ricky joins us tomorrow as we relive those unforgettable scenes in Manchester, 2pm @SkySportsNews pic.twitter.com/RJm3NhrEN9

Welsh world champion Barry Jones received an eight-round tutorial from McAuley early in his career, emerging with a points win, and recognised why this seasoned adversary was selected for the likes of Hatton.

"Colin had a bit of pride about his work. People like him, they were educators, they helped you.

"More than just let you get in the ring and do what you wanted to do and get another win on your record, they taught you a few things, and they were proper learning fights." 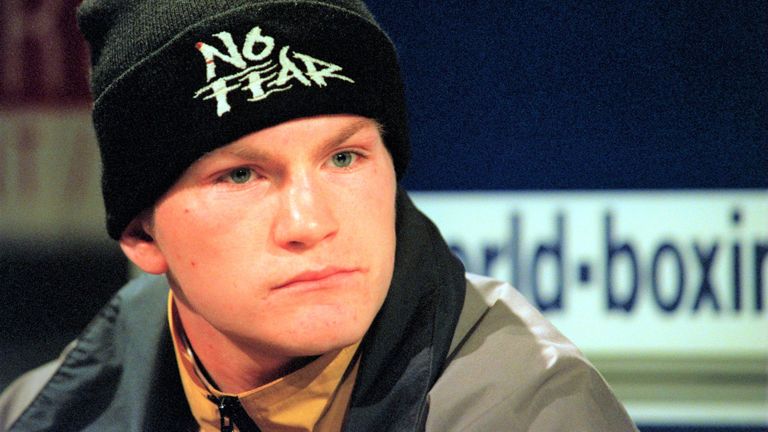 McAuley had intended to issue a few professional pointers to Hatton over the course of their four-rounder.

"Any idea that I would do okay was quickly dismissed within about 30 seconds."

An early glimpse of Hatton's brutal body punching was given in the opening minutes, leaving McAuley with a painful memento from a blistering assault that was halted in the first round.

"Like a bolt of lightning, to be honest," was McAuley's honest description of Hatton.

"My ribs are always getting cracked, but I cracked them again during that fight."

Hatton had made his destructive arrival, while seven months later McAuley had bowed out of boxing, with no lasting regrets about Hatton's debut.

"Wore a pair of roller skates, would have been better," he joked.

As Hatton marched through raucous crowds at the Manchester Arena on June 4, 2005, McAuley waited expectantly to watch the Tszyu fight at a mate's house, no doubt wincing occasionally as 'The Hitman' ferociously pounded the Australian's belt line.

McAuley's opening lesson for Hatton may have been cut short, but youngsters at West Wirral ABC would benefit from the hard-earned coaching experiences of a fighter who had toured the country, commanding respect from rising contenders.

"I taught them all the nooks and crannies, and everything about boxing.

"It was brilliant, because I boxed for so long, 17 years, and to be able to pass it on to young children was just the best."

McAuley would meet Hatton again, giving him a timely reminder of his past by attending a dinner event with the former world champion.

The 65-fight veteran with the fresh-faced nickname - and his teen conqueror.

But had Hatton stood out from the rest?

"I thought he was going to do really well. He's a good kid, isn't he?"