"The world will see me next. I'm right here."

For a fleeting moment America owned the heavyweight division, but the downfall of Deontay Wilder and Andy Ruiz Jr has intensified the search for potential successors such as Jermaine Franklin.

Wilder and Ruiz Jr had spent a glorious summer as champions, wrapped in a variety of bejewelled belts and all the glistening trinkets that come with the role as the world heavyweight king.

By February, that glow of glory and all the belts were gone. Ruiz Jr experienced the cold, stark reality of the sport as his lack of preparation was punished in a wide points loss to Anthony Joshua. Wilder's fall from the throne was similarly chastening as Tyson Fury inflicted a one-sided beating that derided the Alabama man's brutal proclamations of victory.

💥 Battle of the left hooks! 💥 @DillianWhyte v Alexander Povetkin - Who will land first?

Michigan's Franklin, a stand-out prospect with a 20-fight unbeaten record, lets out a brief laugh when asked about Britain's current domination. Yes, his task of tracking down a world heavyweight champion has become more arduous, with Joshua and Fury safely back on the other side of the Atlantic, but now is an ideal time for a young contender to raise their hand for a rescue mission.

"Yeah, we've got to get them back," Franklin told Sky Sports. "Between America and Britain, there's always been something about boxing, we always go back and forth."

Like and share. Im the next Heavyweight Champion for the USA. Numbers don’t lie according to boxerec.com. If you don’t believe me then come change my mind. #heavyweight #boxinglife #heavyweightchampionshipbelt @989_assassin

More graft for more gain has become a motto for Franklin, who had to scrap for recognition in little-known venues, despite entering the pro ranks as a National Golden Gloves winner. Seventeen wins later, Franklin earned the backing of New York-based promoter Dmitriy Salita and American TV network Showtime. Still relatively inexperienced at 26-years-old, he was given a 'best supporting' role on bigger bills, while only knowing half of the script. Franklin had to work harder than he hoped for three undercard wins, all via points decisions, and is still adjusting to his new surroundings, with educational fights being harshly scrutinised.

In the race to become America's next heavyweight hope, Franklin has a few rivals, although the likes of Darmani Rock and Cassius Chaney are yet to take a significant step up in class. They are not necessarily to blame, according to Franklin, who suggests that recognised names on the US scene are more reluctant to risk their rankings or reputations.

"I've been calling guys out here for a while. I'd fight a lot of guys when they're ready.

"How boxing works, people have got managers, sometimes a manager steers you away. At the end of the day, we're trying to get the ball rolling."

At 6'2" tall, Franklin is not one of the division's giants, nor does he rely on concussive one-punch power, despite a respectable tally of 13 knockouts on his record. It's no surprise that he has spent hours studying Evander Holyfield, the former cruiserweight who chopped down boxing's biggest men, and Franklin intends to follow suit with his own smooth combinations and refined ring skills.

The big men to take down at the moment are the Brit duo of Fury and Joshua. Subtle head movement and a stinging jab allowed Fury to nullify Wilder's vaunted power, while Joshua produced a disciplined display of back-foot boxing to fend off Ruiz Jr. Franklin's study sessions have included the current world kings and he reveals his own observations.

"Tyson, it's hard to hit him in the head, because he's got great defence and he's got a nice jab. AJ is more of a puncher, but you could catch AJ if he starts trading with you. I feel like a lot of people don't go to Tyson Fury's body. First you've got to slow him down." 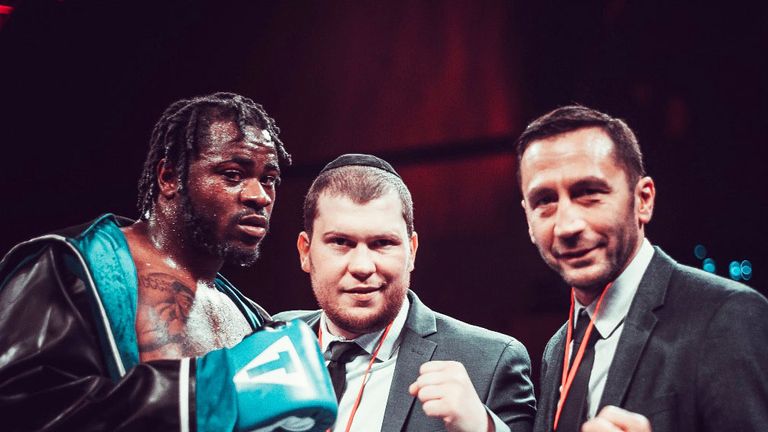 They got a new heavyweight, they got me to save them.

Wilder might have to adopt a tactical switch for his expected third fight against Fury on December 19, with few expecting him to gain instant redemption from a crushing loss.

Ruiz Jr's world title aspirations appear even more fanciful as the Mexican's desire and work ethic have been questioned following his loss to Joshua.

Step forward Franklin, a self-proclaimed savour, who firmly believes he is the sole answer to the 'who's next' question.

"They got a new heavyweight, they got me to save them. People are starting to wake up and see me.

"The world will see me next. I'm right here."