"A great fighter. Pound-for-pound the best in the world, I really believe it"

Jaron Ennis is just waiting for the boxing world to acknowledge his talent, but unfortunately for him, America's best fighters want him to remain a secret.

An extravagant uppercut was the beginning of the end for Juan Carlos Abreu, the latest opponent to crumple after receiving a perfectly placed blow from Ennis. At the age of 23, Philadelphia's latest boxing prodigy, nicknamed 'Boots', has already made deep inroads into the welterweight division, the home of America's hottest crop of fighters.

That 26th victory this month might as well have been a business card from Ennis, a clear indication of credentials, but interested parties may or may not want to take up his offer.

His manager Cameron Dunkin knows all about supreme ability, having previously mentored Terence Crawford, who sits alongside Errol Spence Jr and Manny Pacquiao as champions in the same weight class as Ennis.

"No they're not going to welcome him," Dunkin told Sky Sports, when asked about future fights against any of that esteemed company.

"I've talked with everybody and they all pretty much say the same thing: 'Jaron is new, nobody knows who he is. If I'm going to put my guy in with somebody, I want to put him in with a name, if I'm going to take a chance on losing.'

"These people aren't stupid. They know a pound-for-pound guy and they know that he may be the best welterweight in the world, which I think he is.

"I had Crawford for 20 something fights, so I know him very well. I know all these guys. I think Jaron, who is barely 23-years-old, is going to be tremendous, a great fighter. Pound-for-pound the best in the world, I really believe it."

Crawford is the current claimant as one of the finest fighters on the planet, having previously held every single world title at super-lightweight, so how does Ennis measure up? 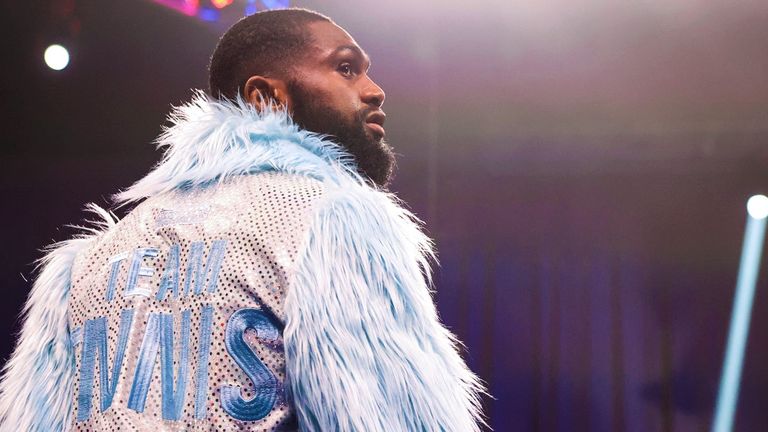 Boots is a fully-fledged welterweight, who is much bigger, stronger, faster and hits harder.

"Terence, when I signed him, he was a tremendous 135lber. He was little and we grew him into a welterweight," said Dunkin.

"Boots is a fully-fledged welterweight, who is much bigger, stronger, faster and hits harder."

Older brothers Derek and Farah were both boxers too, falling short of major title success, and father and trainer Derrick 'Bozy' Ennis has been a strict taskmaster to his most gifted pupil.

Even in the aftermath of the Abreu win, a dazzling audition, the patriarch of the Ennis family was not elated.

"The other night when everybody was hooping and hollering, he had just won the fight," said Dunkin.

Victorious fighters often proclaim that they will swiftly return to the gym, but only few actually mean it, and even less will engage in sparring.

Ennis suggested on social media that he is already trading more punches, just days after he stepped through the ropes.

"The kid, he was in the gym yesterday," said Dunkin. "It's insane.

"What's he doing working out?"

Britain's 147lb weight class is nearing the end of an era, with Kell Brook set to challenge Crawford in what is likely to be his last attempt at a world title, while Amir Khan is also waiting for a potential farewell fight.

Conor Benn, Josh Kelly and Chris Kongo are eager to prove themselves as contenders and at least one could cross paths with Ennis on the route to elite level.

"Oh yeah, absolutely he wants to fight in Britain," said Dunkin. "I asked him where he wanted to fight?

"He wanted to fight all over the world.

"Every time, I ask them who they wanted to fight? 'You get them Cam, don't worry about it. You get who you want and we're ready to go.'"

An airport conversation with Roy Jones Jr is referenced by Dunkin, when asked for comparable fighters to Ennis.

The four-weight world king was killing time before a delayed flight, discussing the 10 greatest fighters, and Jones Jr rattled off a list, with one obvious omission.

Ten minutes later, Dunkin asked: "What about you?"

The moral of his story?

Fighters like Jones Jr and maybe even Ennis sometimes do not realise the full extent of their greatness, but Dunkin knows someone special when he sees them.

"I always said, I'd never signed a Mayweather, a De La Hoya. That kind of a guy.