Billy Joe Saunders on Gennadiy Golovkin: "Does he want somebody with not many miles on the clock, good with his feet, southpaw, slick, around him at that age?" WBO champion faces Martin Murray on Friday night, live on Sky Sports

Billy Joe Saunders believes age is 'creeping in' on Gennadiy Golovkin and can understand why the Kazakh star would be reluctant to trade punches with him.

The WBO super-middleweight champion defends his title against Martin Murray on Friday, live on Sky Sports, with Saunders hoping to stay on course for a big-name battle in 2021.

A clash with Saul 'Canelo' Alvarez has eluded Saunders, with the Mexican star instead facing Callum Smith on December 19, and the unbeaten 31-year-old fears he might be denied a showdown with Golovkin.

Saunders told Sky Sports: "I think Golovkin is now at the age. - he's 37, 38 - you've got to look at his age creeping in and how he fights with his face.

"I've had 29 fights, but out of them 29 fights, I have I been hit by 10 clean punches. Does he want somebody with not many miles on the clock, good with his feet, southpaw, slick, around him at that age?

"If I was in his shoes, probably not, but you've got to take your hat off to him. He has done really well for himself, he has been successful.

"I can't run him down for saying he is ducking Billy Joe Saunders or ducking this man and that man. He is done everything asked of him and I can only respect that."

Saunders was set to challenge Canelo in May, only for the fight to fall through due to the Covid-19 pandemic, and Smith was confirmed as the next opponent for the four-weight world champion last month.

But the lack of preparation time would have been more of a concern than any financial reward, according to Saunders. 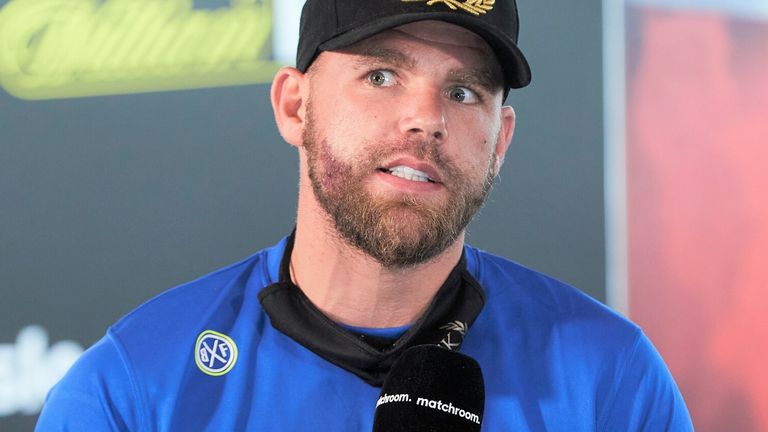 If I'm not 100 per cent right, then I'm not going to put everything I've worked all my life for on the line.

"I really hope he does the job," said Saunders.

"Listen, I like Callum, he's a great fighter and I think he's got the tools in his toolbox to do the job, if the game plan is right.

"It's a hard job just to get sprung on you, four, five weeks before. You're getting a lottery ticket, but sometimes you've got to go in there wanting the win more than what the money is. With me, I'd let you keep the money and let me win, than go in there not prepared right.

"If I'm not 100 per cent right, then I'm not going to put everything I've worked all my life for on the line."

Murray has already shared the ring with Golovkin, suffering an 11th round stoppage loss in 2015, while he also showed his toughness in three other world title fights against Sergio Martinez, Felix Sturm and Arthur Abraham.

The St Helens man is determined to secure a world title at the fifth attempt which would end any plans for Saunders to share the ring with Canelo.

"He wants to put on a performance. I've prepared myself for Billy Joe at his best."