Unified champion Joshua defends his WBA, IBF and WBO belts against Bulgarian Pulev on December 12, live on Sky Sports Box Office, and victory could set up a massive showdown with WBC titleholder Fury next year.

Promoter Eddie Hearn has called on Fury to be among the 1,000 attendance at The SSE Arena in Wembley, but admits that Joshua must not be distracted from the threat posed by Pulev, his IBF mandatory challenger.

"I think that he should be coming," Hearn told Sky Sports, when asked about Fury watching from ringside.

"If he wants to fight Anthony Joshua, it's not a case of calling him out, it's called doing his research and building the fight.

"Tyson Fury is more than welcome to come down. I only live 45 minutes away from Wembley. He can come around on Sunday afternoon for a roast as well, if he wants and a cuppa.

"We just want to get that fight made. But first things first, we've seen it before at Madison Square Garden with Andy Ruiz when we were talking about the Wilder fight. This is it. This is the last hurdle - Kubrat Pulev, December 12."

Pulev has defeated Derek Chisora and Hughie Fury since suffering a solitary loss to Wladimir Klitschko six years ago and Hearn has urged Joshua to rediscover his ruthless best form.

"We're all nervous, we're all concerned because AJ is as well," said the Matchroom Boxing boss.

"He knows the pressure is on. He knows that all he has to do is beat Kubrat Pulev on December 12, and the Fury fight, the undisputed fight will present itself.

"But it's going to be a difficult fight. Pulev is a top contender, he has trained very hard.

"One defeat to Klitschko, years and years ago. He has been undefeated for many years. Technically very good, great jab.

"AJ I think has got to not show him too much respect. Bust him up, beat him up, and knock him out. I think you're going to see a devastating performance from the best heavyweight on the planet in Anthony Joshua."

Anxious wait for AJ and Pulev

Joshua had a spell of self-isolation earlier in the year in March following the outbreak of the pandemic and will receive his final pre-fight test on Tuesday. 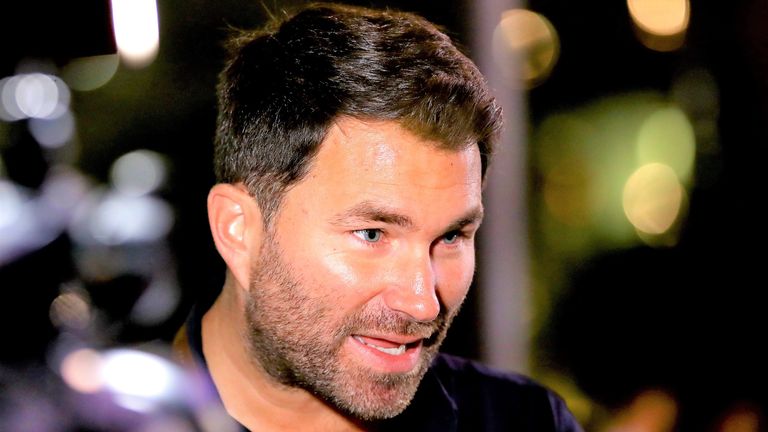 Just waiting for results and just waiting to confirm that we can finish the year with a massive bang with AJ against Pulev.

"At this top level, these guys have Covid tests non-stop and it's really fingers crossed at this stage," said Hearn.

"Anthony Joshua, we believe might have had that illness many months ago, so hopefully that's not even a possibility for him, but everyone is being so careful.

"Kubrat Pulev I believe arrives tomorrow evening. He has been tested throughout.

"We did get the news today Glowacki, who is fighting Okolie, tested positive this morning. It's just an ongoing nightmare.

"Even I know when Anthony Joshua will be testing. I think he comes in Tuesday next week.

"It's going to be sleepless nights, just waiting for results and just waiting to confirm that we can finish the year with a massive bang with AJ against Pulev."