Derek Chisora on Joseph Parker fight: "If fight fans want it, I'm game. This fight happens on my turf." The New Zealander has also welcomed a heavyweight showdown if he defeats Junior Fa in Auckland on February 27

Derek Chisora and Joseph Parker have expressed their desire for fresh talks about a rescheduled fight after a spider bite scuppered their heavyweight showdown.

Chisora was set to face Parker in October 2019, only for the fight to be cancelled after the New Zealander's preparations were ruined by a three-week illness, with photos appearing to confirm a spider bite on his leg.

But Parker is currently preparing for a fight against Kiwi rival Junior Fa on February 27, which could pave the way for a long-awaited showdown with Chisora.

"I've heard some noises and frankly that is a fight with interest," Parker's manager David Higgins told Sky Sports.

"We'd endorse it and there is interest from Parker, and our management team would endorse it.

"There was a lot of talk in the past. The fight was contracted at one point. I think that fight makes sense."

Chisora emerged with credit from a battling points loss to Ukrainian star Oleksandr Usyk in October, and remains open to fighting Parker, the former WBO champion.

"I've made no secret that I want the fight with Parker," Chisora told Sky Sports. "I signed the fight, flew to his camp in LA to film only for him to chicken out and claim a spider bite was the reason he couldn't step in the ring with me.

"The truth is, when sat across the table, looking in my eyes, reality hit, he wasn't ready for the WAR I bring. If fight fans want it, I'm game. He can come to me this time. This fight happens on my turf."

Parker's fight with Fa is being staged at The Spark Arena in Auckland, a venue with a capacity of up to 12,000, and Higgins believes the clash with Chisora could be held in New Zealand.

"They would want to do it in the UK. I would challenge Chisora and David Haye to come down to New Zealand to do it," said Higgins.

"If not, we'll still discuss it, but it would be very interesting to see one, whether they are for real, and two, what they have in mind.

"From the Parker perspective why waste time? We'd be keen to get that fight up and going in New Zealand or the United Kingdom, in the beginning of June would be feasible I'd think.

"If you're interested in the fight, David Haye has my phone number. Joseph Parker's promoter is Eddie Hearn and Matchroom, and they would be on board too.

"In the past, it was an option that Matchroom were favourable about, so if Chisora and Haye are serious, start some discussions and obviously Joseph has to do the business in February, which is all he's focused on. But there is no harm in us as management talking about the future now."

Chisora's manager David Haye has welcomed the prospect of the Parker fight as he seeks to guide his fighter back towards world title contention. 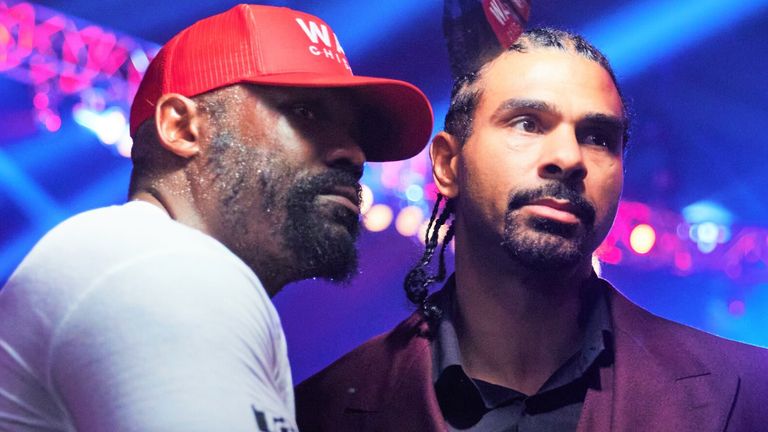 If Parker and his team are serious about making this fight again, we will happily look to reschedule.

Haye told Sky Sports: "All stakeholders wanted the fight in 2019 and we made it happen, Parker had to pull out with quite an unusual excuse, a spider bite. But that can be boxing.

"If Parker and his team are serious about making this fight again, we will happily look to reschedule. Derek is in camp and eager to get back in the ring, he thrives on the biggest battles, those match-ups that really get fight fans excited. The Parker bout is one fight fans want to see."

Parker, who is ranked at No 3 by the WBO, had been hopeful that he could earn a fight against Usyk, potentially for a vacant WBO title.

But the governing body is set to sanction Anthony Joshua's undisputed world title clash against Tyson Fury, with Usyk being offered a fight against Joe Joyce for the WBO interim title.