Lawrence Okolie has given a chilling warning of his brutal plans for his first challenger Dilan Prazovic.

Okolie was a pound lighter than the 14st 4lbs (200lbs) limit for his maiden defence of the WBO cruiserweight championship on the Anthony Joshua vs Oleksandr Usyk undercard on Saturday, live on Sky Sports Box Office.

"I made the weight well so I am focused on dealing with him in good fashion," undefeated Okolie said.

"I want a massive KO. A massive, massive knockout."

Okolie's opponent Prazovic is unbeaten in 15 but an impressive victory for the London fighter would edge him closer to unification fights with his division's other champions, such as Mairis Briedis.

Callum Smith hit the 12st 7lbs (175lbs) limit perfectly for his first outing as a light-heavyweight, against Lenin Castillo of the Dominican Republic.

The former super-middleweight world champion said: "I feel good, I feel better. I feel at a good, solid 175lbs and hopefully my performance will show that."

Smith has new trainer Buddy McGirt in his corner and said: "He is a very good trainer and can improve me as a fighter. I need to show those improvements.

"The win is the most important thing but I always aim to perform, look good and progress.

"Saturday night is a step closer to where I want to be."

Smith is targeting a light-heavyweight title to become a two-weight world champion. 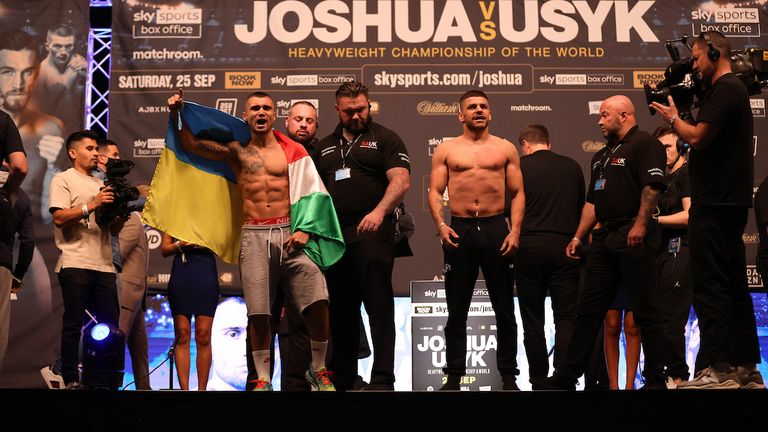 Florian Marku needed a second attempt to make the welterweight limit for his grudge match against Maxim Prodan.

'The Albanian King' had to be dragged away from his rival by security at Thursday's press conference and managed to fire some last-minute trash talk on Friday before they finally settle their score.

Campbell Hatton was bang on the 9st 10lbs (136lbs) limit for his fight with Sonny Martinez.

The son of the legendary Ricky Hatton is having his fourth pro fight and is unbeaten so far.