"It's great that he's going to get some exposure now and he's got a bright future," George Groves is impressed by the progress of former sparring partner Germaine Brown who faces Jamal Le Doux on Saturday, live on Sky Sports George Groves has backed Germaine Brown to achieve title success at super-middleweight after trading punches with the exciting young contender.

Brown faces Jamal Le Doux in a final eliminator for the English super-middleweight title this Saturday, live on Sky Sports, with Chris Eubank Jr topping the bill against Anatoli Muratov.

Former world champion Groves will be watching with interest, having brought Brown into his training camp as a sparring partner ahead of his WBA title defence against Eubank Jr in 2018.

How do you look back on those sparring sessions?

Groves: Germaine, as I'm sure he won't mind me saying, hadn't had a lot of amateur fights when we brought him in for sparring. He would finish off my spars or start the spars.

He would give me good rounds, but I was obviously a world champion at the time and I was probably in the best shape of my career. 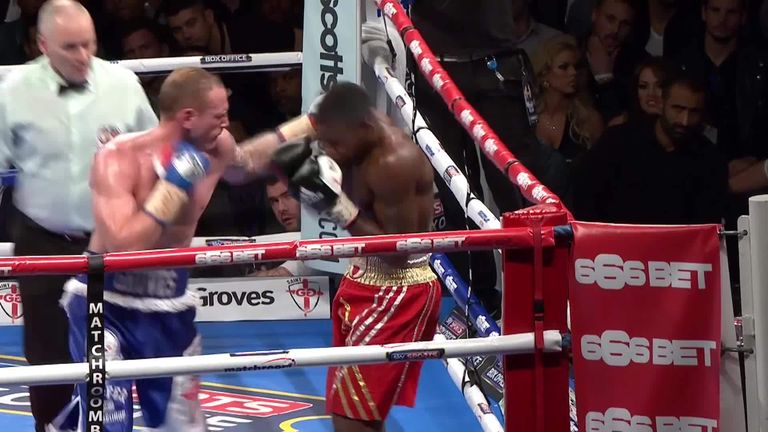 Look back at a big KO win for Groves

Brown: I learnt so much from being in the same gym as him.

It was a great experience and that was before I actually had a pro fight. It just showed me what the pro game is like.

Groves: He was a fantastic sparring partner for me, because he had all of the things you want in a young fighter. He would give it his all and he was willing to make the adjustments and learn.

Huge news, glad to say I have signed with @boxxer and @skysportsboxing And will be fighting on October the 2nd at the Wembley arena! pic.twitter.com/fCAQmo6DyR

A world champion sparring a young prospect - an important lesson?

Brown: It was tough sparring. It just showed me levels. The level that I was at and the level he's at. It showed me that. I was still at amateur level and he was a world champion.

Little things that he was doing. Obviously he's got one of the best jabs in Britain, but the timing of his jab. Different varieties of jabs. The power of each jab and changing it.

The way he positioned himself. Going against the ropes, coming up with body shots. Loads of things. I learnt so much from that.

Groves: I take pleasure from that, if he says some of the things that he witnessed around me rubbed off on him.

You've got to live and breathe it, 24 hours a day.

I'm glad he's doing well, unbeaten as a pro. It's great that he's going to get some exposure now and he's got a bright future.

How important was Brown's breakout win over Dmitriy Chudinov?

Brown: I was going to Belarus to box against a Russian. A lot of people thought I was crazy for going out there, expecting me to lose, but I just went out there and did my thing.

If you want to do well in boxing, you've got to take risks sometimes and that's what I'm willing to do.

Groves: Now, he hopefully won't have to take so much of a risk. Going to a foreign country and boxing away from home like that, you've got to knock them out to get a draw sometimes.

But I'm glad he got the win. It shows his talent and it shows his grit, that he's willing to do it.

Sometimes fighters have to suffer a little bit at the start and they reap the rewards for it, in the end. It toughens you up and gets you ready for the big fights ahead.

What more can we expect from Germaine Brown?

Groves: If he's willing to take the educated risks and work hard, I back him for the future. He looks like a natural athlete and a student of the game.

He's got a promoter behind him that's going to back him and push him on for the major titles.

Brown: Hopefully after this, I'll box for an English title. Moving on to more titles.

Me taking care of business.