The 28-year-old took the belt with a points win over Shawn Porter in August and he returns to action in his hometown, taking on the Romanian at the Motorpoint Arena in Sheffield on March 28, live on Sky Sports.

Brook's career was left in doubt after he suffered a serious leg injury in a shocking machete attack, but he has made a swift recovery and will be hunting down the big names in his division. 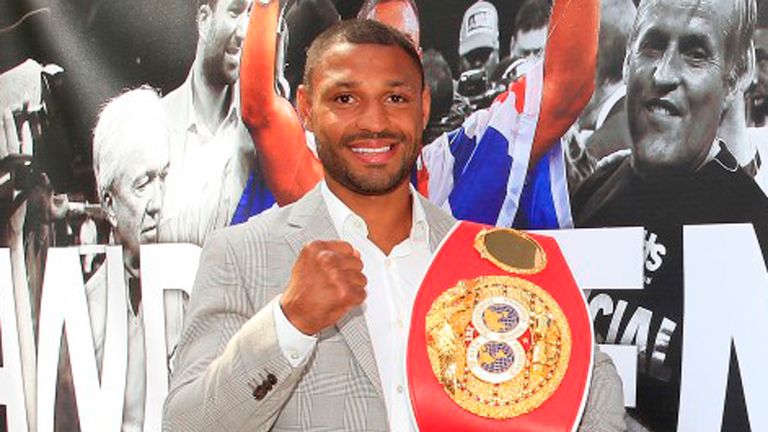 I am after those massive fights - you all know the names - later in the summer, but I have to get this one out of the way first, and he is a tough customer.

A bumper domestic clash with Amir Khan is top of Brook's hitlist for 2015, while superstars such as Floyd Mayweather and Manny Pacquiao also hold titles in this weight class.

"It will be emotional, after winning the world title last year but then a few weeks later having an horrific knife attack," said Brook.

"I was wondering if I would walk again, never mind fight, but now I am feeling fit.

"I am getting the mandatory out of the way. I am after those massive fights - you all know the names - later in the summer, but I have to get this one out of the way first, and he is a tough customer."

Brook's promoter Eddie Hearn said: "It is going to be emotional for Kell and a lot of us

“The highs and lows of last year were incredible. August 16th in Carson, that wonderful victory over Shawn Porter, who many were making out to be the Hulk Hogan of the division.

“Kell did a job on him, wrestled the world title from him and brought it back to the UK. I remember coming here to Sheffield, we were at the City Hall, and the public came out to welcome him back as their champion.

“He then went on holiday and a few days later I got a call to say he had been stabbed. I remember reading reports on Twitter that he might lose his life, that he was on a life support machine.

“I flew out and the doctor told him ‘you might not be able to walk properly again’. At that stage, you think the career is over. He had just won a world title in probably the most lucrative division in world boxing and now it’s gone.

“He deserves a lot of credit for coming back, for the rehabilitation, for getting himself in great shape, and now he has got a chance to walk out in front of a wonderful sell-out crowd at Sheffield Arena.

“I can’t wait to see him do so, he is a great fighter.

“Jo Jo Dan is also a great fighter and the No 1 ranked fighter in the division , in Kell Brook’s governing body.

“We must get that mandatory out the way. He is due a mandatory defence and, if he gets this done, it unlocks the door to all those big fights in the summer.

“(Floyd) Mayweather, (Manny) Pacquiao, (Marcos) Maidana, (Juan Manual) Marquez, and of course Amir Khan is one that everybody wants."

The Canada-based Dan has moved up the rankings with 34 wins and has suffered just two defeats, both coming against Turk Selcuk Aydin.

And Hearn added: “This is a tough, tough fight. Jo Jo Dan has come through two final eliminators to get here in this spot. He is ready for this fight and has got a great style.

“But we are looking for a devastating performance from Kell Brook to announce himself, not just here but this is also going to be a major broadcast in America.”

Etches is considered one of the most exciting middleweight prospects, but must get past Khomitsky, who holds wins over Frank Buglioni and Jamie Moore.