Anthony Joshua has responded to Kevin Johnson's claim he is 'a media hype job' ahead of Saturday's highly-anticipated heavyweight clash at the O2 Arena - live on Sky Sports Box Office.

Joshua, an Olympic champion who has halted all 12 of his professional opponents inside three rounds, laughed off Johnson's attempt to get inside his head and credited promoters Matchroom Sport and Sky Sports for affording his talent exposure.

Speaking at a public workout in Covent Garden, Joshua said of Johnson's snipe: "I have to take my hat off to Matchroom Sports and Sky Sports because they're doing a great job for me by presenting me to the public. Only a few years ago, nobody really knew who I was.

"To be called a hype job, I'm really happy my hype train is on the road. We're at a pit stop on Saturday night with the Johnson fight and once I get that victory we'll be back on the road again! I have to take my hat off to you guys and I really appreciate it. 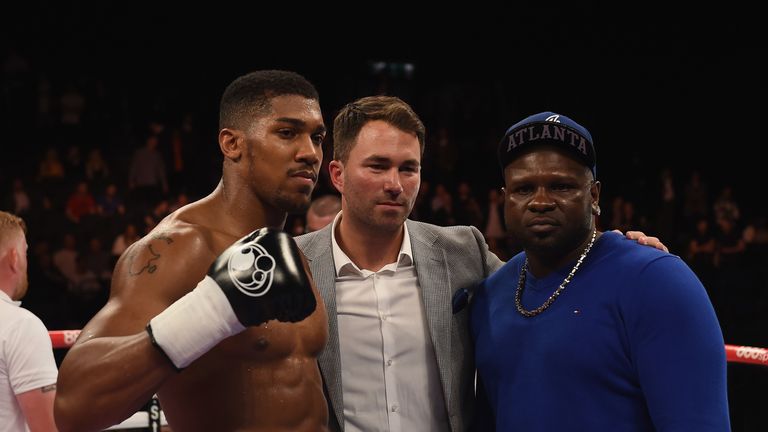 To be called a hype job, I'm really happy my hype train is on the road. We're at a pit stop on Saturday night with the Johnson fight.

"I felt really strong on May 9 (when stopping Raphael Zumbano Love in two rounds) and I feel even stronger now, so I'm looking forward to it.

"You've got to tune in to see this fight because Kevin Johnson has been in with Vitali Klitschko, some of the British contenders and some guys fighting for a world championship. I'm coming up now.

"It's a win-win for me. If I get the victory and go the rounds then I'll have done something I haven't done before and if I get the stoppage, it'll be a great statement from myself.

"It's the way he's gone about it. I've never said I was going to be the one to stop him. I think he's really put that pressure on himself. Once we start connecting and I find openings to body and head, I'll be concussive and able to knock him out.

"I try and display some of my strengths in the fights but they tend to end quickly but Kevin Johnson is very experienced and very defensive. He'll be talking trash. He's a man of pride but I'm going to go in there and do a job on him.

"I love the fact the talking stops on Saturday. I'm going to break him down over 10 rounds and you can't run for 10 rounds. Sooner or later, someone gets found out."

Watch Joshua v Johnson live and exclusive as part of Brook v Gavin, on Sky Sports Box Office on May 30, with Mitchell and Selby also on. Book via your phone or online now. If you want to record the event, book via your Sky remote. skysports.com/brookgavin