Teofimo Lopez: "Floyd was always someone that stayed motivated. He knew what was at hand." The unbeaten 23-year-old is planning his next career move after unifying the WBA, IBF and WBO lightweight titles

The Brooklyn fighter is still basking in the glow of a breakout year, having earned his esteemed status as the world's No 1 lightweight with a masterful victory over Ukrainian star Vasiliy Lomachenko in October.

Lopez now holds the WBA, IBF and WBO belts, along with the added honour of being named as the 'Co-fighter of the Year' by The Ring Magazine, but the 23-year-old has retained his unwavering commitment to the sport.

"I learned that from Floyd. Floyd was always someone that stayed motivated. He knew what was at hand. He was always staying in shape for a reason, because he never got caught up in it, and because he was so disciplined.

"It's all about discipline. The moment you are disciplined and you have that self-discipline, you are able to do these things without it being so hard."

George Kambosos Jnr, the IBF mandatory challenger, could be next in line for Lopez, although the New Yorker is also eager to rip the last remaining WBC belt from Devin Haney.

The slick style of Haney has even led to comparisons with Mayweather, but Lopez believes his fellow champion needs more time to mature his ring skills and his showmanship.

"He needs to step up his game and talking. It's horrible, it's bad, it's really bad," said Lopez.

"They need to work on that. I think that with Devin, he has a lot of things where it has to be scripted. It just can't come out. 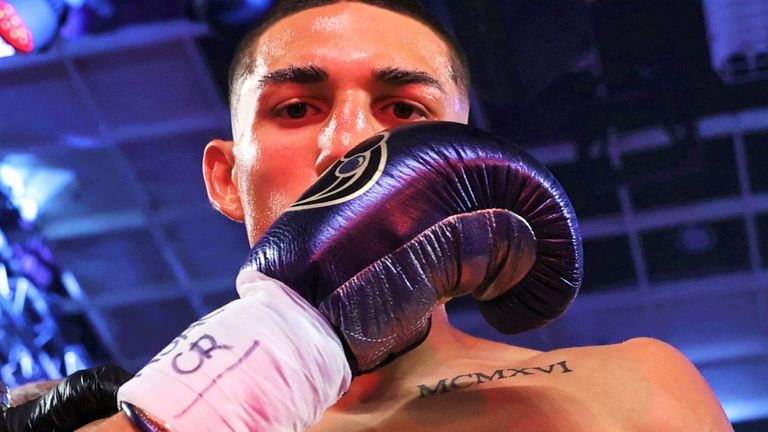 I believe Devin Haney will be next.

"Me and my father, we're on the same page. I believe Devin Haney will be next."

Garcia, even without a belt, has emerged as one of the most high-profile fighters at 135lbs, and the highly-rated Californian confounded his doubters by climbing off the canvas to stop Luke Campbell last weekend.

The 22-year-old is backed by a huge social media following and has since called for a lucrative showdown with Gervonta Davis.

"People had a questioning feeling about Ryan Garcia's chin," said Lopez. "Luke Campbell kind of showed it. He showed it that night.

"But for him to come back, I think that's what everyone was surprised about. The way Ryan Garcia came back and finished the way he did. A lot of people are very happy about that.

"It's great fights. These guys are hungry, all of us are hungry. We've just got to make the best fight the best.

You are not what they say you are, you are who you choose to be 👑 pic.twitter.com/MpPSOScbPy

"Whether it's his team or not, they know what they are doing with Ryan Garcia. He may not be the most skilful fighter, however, he is the most skilful social media guy out there when it comes to this department. You've got to give credit to that.

"That's why I think a lot of these guys want Ryan Garcia next, because they know the amount of exposure they are going to get.

"I think Ryan himself knows that."

Lopez also has a unique selling point, his brutal honesty, which extends to his own strengths and failings. The world's best in a stellar division? He's just getting started...

"People are going to have to be careful," said Lopez."I tell them like this, 'It's better you get me now, than later'.

"By the time you get me later, it's going to be too late for everybody."