He sets sights on a Stamford Bridge showdown

George Groves insists taking on James DeGale at the O2 will be a "regression" - and wants a summer stadium showdown instead. 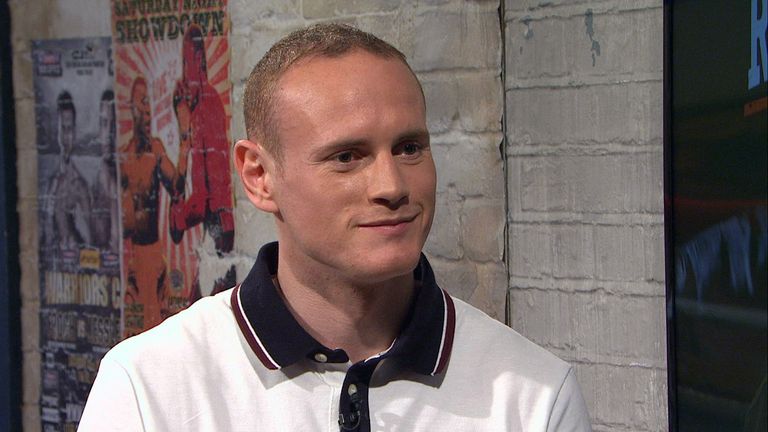 Do we have to regress and go back in time? Four years ago, when I beat him for the British title? At the O2? I would prefer it to be far bigger, far greater and grander - and put my name in history a little bit

The super-middleweight has been offered a rematch with his bitter rival on April 25, when the IBF world title vacated by Carl Froch will be up for grabs.

DeGale is the mandatory challenger following last week's confirmation from Froch and although Andre Dirrell is next in line and should be the opponent, Eddie Hearn admitted he would like to see a rematch between the west London pair instead.

Groves is keeping his "options open" but makes it clear he does not want to take a step back and box his long-time enemy at the same venue where he beat him for the British title back in May 2011.

"DeGale's now gone down the IBF route and has got to fight Andre Dirrell, the other ranked up there by the sanctioning body, but he is a Londoner, an Olympic champion, I wish him luck," he told Sky Sports.

"This is a big fight. If James is clever enough and thinks to himself 'I can't beat Groves, it's my chance to win a few quid' why cash out in April? Let's do it in the summer and make some real money.

"Will we ever sell out Wembley again? I'm not sure but when they put on big shows at Upton Park, Lofus Road, these are historic events and boxing events fans can go to. They remember it, they want to be part of it and I am no different.

"People are telling me 'you're going to fight James DeGale and he's going to make history,' so why, all of a sudden, do we have to regress and go back in time? Four years ago, when I beat him for the British title? At the O2? I would prefer it to be far bigger, far greater and grander - and put my name in history a little bit.

"And I'd like to get a win at a football stadium under my belt!"

Groves also revealed that he is still looking for a fight in April but will not be able to challenge WBC champion Anthony Dirrell as planned.

Promoters the Sauerlands are questioning the decision but the 26-year-old from Hammersmith expects to wait four months before getting a crack at the latest super-middleweight champion.

But admits he is in training and ready to get back in the ring before the summer.

"I've taken a lot of time getting into this position so why should I give up to take small change and take the short hand fighting DeGale now. This fight is always on the table and if they make an offer I couldn't refuse, then I'd be much more interested," Groves added.

"Eddie needs a star attraction to fill dates. James DeGale needs a dance partner. If he does fight Andre Dirrell he probably isn't very confident of winning that fight because he could lose and not make any money out it. But if he boxes me he can lose and make a few quid. I understand his logic.

"We've got an April fight in mind because I don't want to get caught off guard - in fact I've been bashing up southpaws this week."