Mayweather vs Pacquiao: Pacquiao believes Mayweather is worried he will lose his unbeaten record

Manny Pacquiao believes Floyd Mayweather is worried his unbeaten record will be ended this Saturday night.

The Filipino thanked his rival for agreeing to take the fight when they both went face-to-face at Friday night's weigh-in at the MGM Grand in Las Vegas.

Mayweather refused to respond and Pacquiao, who looked relaxed throughout the occasion, feels he has gained the psychological edge just over 24 hours before the fight.

"I think he is a little bit worried because he will face the threat to that 47-0." 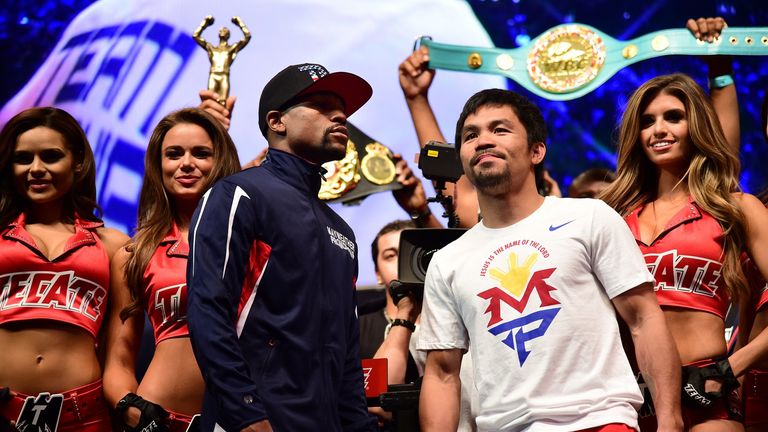 I think he is a little bit worried because he will face the threat to that 47-0.

Pacquiao also admitted that he will be more aggressive than usual - in attack and defence.

The 36-year-old has only knocked out one of his last 10 opponents and was floored by mutual opponent Juan Manuel Marquez in 2002, so knows he has to control his aggression.

"We have a lot of different techniques that we practise in the gym and they are more aggressive - not too much careless defence," he said.

"It depends [winning it on points]. We're focusing on that... and that we are ahead in every round. We are very confident."

Pacquiao weighed in at 145lbs, two short of the welterweight limit, while Mayweather came in a pound heavier at 146lbs.

Manny thanks Money in H2H