Dillian Whyte hopes victory over Robert Helenius will all but guarantee him a world title shot, and the heavyweight has targeted two huge fights to follow.

Book Joshua vs Takam and the packed undercard right here...

Whyte battles with 'The Nordic Nightmare' this Saturday night for the WBC Silver Heavyweight title at the Principality Stadium in Cardiff, live on Sky Sports Box Office. 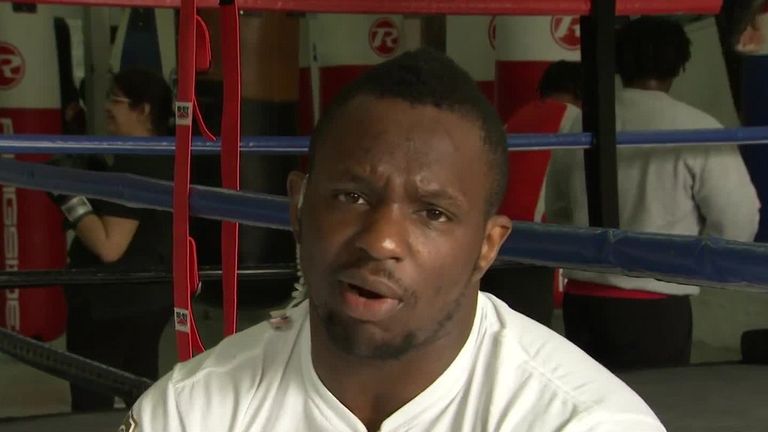 Joshua is the man at the minute. I want the rematch with him. I'd like to fight Wilder or maybe Parker first, they are the two weakest world champions.

He remains intent on securing a showdown with WBC king Deontay Wilder and, while that remains his immediate goal, it is a "massive" rematch with unified world champion Anthony Joshua that the 29-year-old is hoping that follows.

Helenius has vowed to destroy the Brixton heavyweight's world title dreams, but 'The Body Snatcher' is confident he will overcome the former European champion.

"I've chased Wilder, but he is a disgrace. I want to get into a position to fight for his belt because he is not going to do it voluntarily.

"They will say 'AJ' is number one. He has multiple belts and he's the only one who is fighting the names. Wilder is a chump, he's not fought a mandatory in two years and Joseph Parker is defending his title on YouTube so that shows his level. That says it all.

"Joshua is the man at the minute. I want the rematch with him. I'd like to fight Wilder or maybe Parker first, they are the two weakest world champions.

"I'd beat one of those which would then set up a massive rematch with Joshua over here at Wembley or Cardiff or even another country - I'd even fight him in Nigeria!"

Whyte first has to deal with Finnish giant Helenius this weekend and he has vowed to do whatever it takes to be victorious.

"With all of the world champions out there being tall we've been chasing tall opponents," he said.

"I don't think Helenius likes the heat which will play against him because I'm coming to cook something on Saturday.

"He was supposed to be the next Wladimir Klitschko, they were really pushing him at one stage. He's had a couple of slip-ups along the way but he's very experienced compared to me.

"I've got a saying though: 'It's better getting an ugly win than a pretty loss', so I'll do whatever I have to do when I get out there."

Watch Dillian Whyte vs Robert Helenius on the Joshua vs Takam undercard, from the Principality Stadium, Cardiff, on Saturday, live on Sky Sports Box Office. Book via your Sky remote or online.