Porter on potentially playing for England this summer: "If there's rotation and I find my way in that way then I'll be over the moon - if you offer me one Test match, it's better than none. But if I could force my way into the best XI that's the end goal"

Essex seamer Jamie Porter says a chat with James Anderson this winter has inspired him as he looks to force his way into England's Test side.

Porter came close to an international debut against India three years ago but was then left out of an expanded England training group during the coronavirus-affected summer of 2020.

The 27-year-old - who has taken 208 wickets at an average of 21.53 for Essex since the start of 2017 - messaged Anderson while England's leading wicket-taker was in the subcontinent and took on board what his fellow seamer had to say.

Porter - whose wickets have helped Essex claim three red-ball titles in the last four years - told the Press Association: "I had a long chat with Jimmy about bowling in general and some of the stuff he gave me about his mentality and the stuff he's picked up over time gave me a lot of encouragement. I took a hell of a lot away.

"It was one of the best things I've ever done. It's hard to have a chat with one of the greatest bowlers of all time and not take a lot away.

"It put things into perspective a lot for me, just about how to approach games, how to deal with things not going your way. 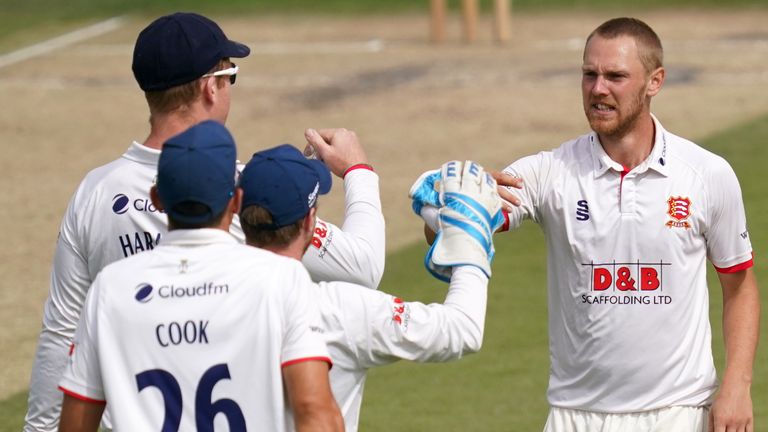 I've got to be very cautious about putting a timeframe on it because I don't want to slip into it being the be-all and end-all because that will do me more harm than good.

Jamie Porter on his England ambitions

"I thought I'd try to pick a few technical points up off him but actually it was more the mental side of the game that I learned the most about. Honestly, I think that was the best thing I could have got out of it."

Porter could earn a chance this summer if England continue with their rest and rotation policy but says he wants to bowl his way in their best XI and knows impressing once again for Essex - who start their County Championship campaign at home to Worcestershire on Thursday - is the best way to do that.

The seamer added: "Another thing I got from Jimmy - I got this more from being in the England squad with him - was the best way to approach it is to try to force my way into the best XI.

"If there's rotation and I find my way in that way then I'll be over the moon - if you offer me one Test match, it's better than none. But if I could force my way into the best XI that's the end goal.

"The best thing is to be contributing to a winning side. If we're winning games and I'm spearheading that then hopefully it will be hard for (England) to look past me."

Durham will be one of Essex's opponents in County Championship Group 1, with the North East county now captained by Scott Borthwick.

The 30-year-old has re-joined boyhood club Durham after four seasons at Surrey and is looking forward to his second spell at Chester-le-Street and the potential of playing Division One cricket later in the season.

If Durham finish in the top two of their initial pool, they will progress into the top division of a tweaked three-tier County Championship.

Borthwick told Sky Sports News: "It became a no-brainer for me to represent Durham again - it's very exciting and to be given the chance as captain is fantastic.

"There is a new management and head coach but at the same time it all feels the same to me. I have the same squad number, the same county cap and I am sitting in the same spot in the dressing room.

"It's been a tough couple of years for Durham but we have a really good mixture of experienced players and good young players coming through.

"As county cricketers we get some random schedules, a bit here, there and everywhere but with the routine of Thursday through to Sundays over the first couple of months gives us something to focus on and to push on towards that top two and potentially play Division One cricket."