Simon Harmer claimed 12 wickets in the match as Essex returned to winning ways with an innings-and-15-run victory over bottom-placed Derbyshire in LV= Insurance County Championship Group 1.

Harmer, who bowled unchanged from the River End on day four, took 3-122 in the second innings after a career-best 9-80 in the first for match figures of 12-202, his seventh 10-wicket haul in the Championship,

Jamie Porter (3-41) and Sam Cook (3-45) also took three scalps in Derbyshire's second-innings 251 all out, while Ryan ten Doeschate claimed six catches in the match, all at short-leg.

VICTORY: Essex have won by an innings and 15 runs 🙌

Hughes is caught by Walter off the bowling of Cook and that's the game!#ESSvDER pic.twitter.com/aQXd4S66bc

The comprehensive win - Essex's first in four games - earned them the maximum 24 points and moved them top of Group 1, three points ahead of Durham and Nottinghamshire, albeit having played a game more.

Brooke Guest (65) and Billy Godleman (45) had frustrated Essex with a second-wicket partnership of 97 for Derbyshire before both fell lbw, to Porter and Cook respectively, following a change of ball - Guest having swept the previous one into the brick wall in front of the pavilion.

Wayne Madsen (36) and Leus du Plooy (39) - both of whom were reprieved by dropped catches - put on 75 to steer Derbyshire to 193-3, only for the visitors to then lose their final seven wickets for 58 runs.

Essex have now beaten Derbyshire by an innings in four of their last five meetings, with this win coming despite a washed-out opening day and 147 overs lost in the match.

Second-placed Durham are close behind Essex after trouncing Worcestershire by 258 runs, with Chris Rushworth taking 4-52 on the day he became the county's record wicket-taker in first-class cricket.

Rushworth's first wicket of the day, that of Jack Haynes (24), was his 528th for Durham, moving him above the mark of 527 achieved by former England paceman Graham Onions. 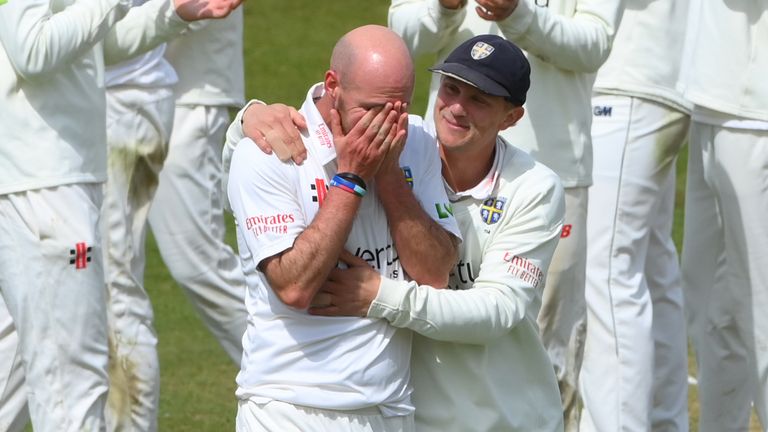 In Group 3, persistent rain ensured Glamorgan's game against table-toppers Yorkshire in Cardiff ended in a draw.

There were only 13 overs of action on Sunday but that was still enough time for Glamorgan's Kiran Carlson (88no off 84 balls) to continue his impressive season with a fourth fifty of the season on the day of his 23rd birthday.

Play began at 4.15pm with the home side 108-3 in their second innings and leading by 27 and Yorkshire's hopes of forcing an unlikely win were raised when David Lloyd (40) was pinned lbw by Ben Coad.

However, Carlson - who also has two centuries so far this season - played some sparkling shots as he steered his team to 164-4.

The draw has sent Yorkshire five points clear of Lancashire at the summit of Group 3, with Glamorgan in third spot.

Also in Group 3, Kent's Jack Leaning completed the sixth hundred of his first-class career in the draw with Sussex at Hove following a rain-shortened final day.

Leaning finished unbeaten on 127 when fists were bumped at 4.50pm and he was joined in a 172-run fourth-wicket stand by Ollie Robinson, who scored 85 in Kent's second-innings 387-4 declared.

Jofra Archer appeared in his whites as the teams warmed up but then did not take the field due to a sore elbow as Kent resumed their second innings on 220-3, an overnight lead of 109.

The England paceman did not bowl at all on Saturday either, perhaps giving England an injury scare ahead of the first Test against New Zealand at Lord's on June 2.

Finally in Group 2, no play was possible at Taunton with Somerset and Surrey's weather-wrecked game abandoned shortly before 11.30am on the final day due to rain and a wet outfield.

Only 68 overs were played across the four days with Surrey reaching 206-4 in their first innings - England opener Rory Burns top-scoring with 55.

The draw was good news for Group 2 leaders Gloucestershire, who are four points clear of second-placed Somerset and 13 ahead of third-placed Hampshire and have a game in hand on both sides.

Somerset visit Gloucestershire next week while Surrey host Middlesex in the Sky Live London derby at The Kia Oval, with coverage beginning on Sky Sports Cricket at 10.30am on Thursday.