Eoin Morgan on Alex Hales: "We're spoilt with riches at the top of the order, and the longer you spend out of the side, the further away you get from that position you had; watch the first T20 international between England and Sri Lanka, live on Sky Sports Cricket from 6pm, Wednesday

England white-ball captain Eoin Morgan has not ruled out a return to the international fold for Alex Hales, but added that "there are conversations to be had" with the big-hitting batsman before any potential recall.

Hales has not played for his country since testing positive for recreational drugs in the build-up to the 2019 World Cup resulting in a 'breakdown in trust' between himself, Morgan and senior England team-mates.

Hales is again absent from the squad for the upcoming three-match T20 international series against Sri Lanka - starting on Wednesday, live on Sky Sports Cricket from 6pm - and subsequent one-day internationals.

But asked whether Hales still had a chance of playing again for England, Morgan told reporters: "I think he does.

"When you look at the player that he is, and the performances he puts in around the world, he is a very fine player.

"But, with players we have available to us at the moment, we're spoilt with riches at the top of the order, and the longer you spend out of the side, the further away you get from that position you had.

"Look at our top order at the moment, in particular, even outside of our top three or four, we have guys sitting behind who have drastically improved in terms of performances in an international shirt that are taking more positions.

Later asked if there were still trust issues between the pair: Morgan said: "I think there are conversations to be had between Alex, myself, the coach, and potentially a few of the players.

"Trying to get those happening in Covid times has been an issue. But it will happen at some stage." 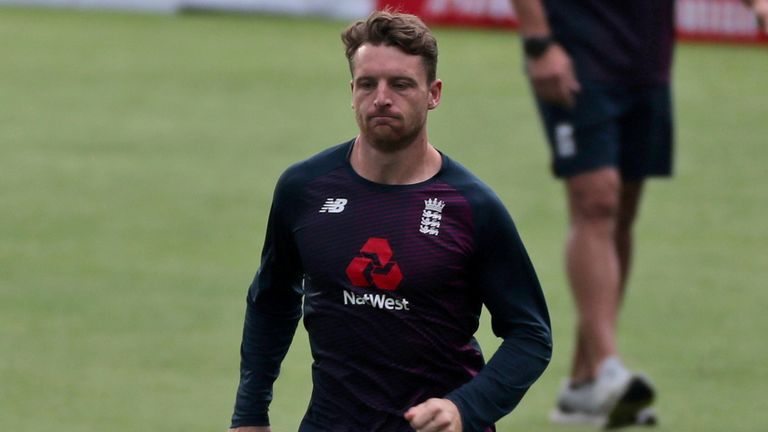 Another notable absentee from England's T20 squad is Test captain Joe Root, but Morgan stressed that his omission doesn't yet rule him out from playing a part in the T20 World Cup in India in October.

"There is no definitive answer on anybody at the moment," Morgan said. "Joe is obviously keen to get back involved, as and when he can.

"We know the demands on his schedule, which has probably led to him having not as many opportunities but, equally, in missing games other guys have come in and done well - Dawid [Malan] is a good example of that - but there is no way that we're ruling Joe out."

Morgan: If I call somebody 'sir', it's a sign of respect

Morgan also addressed the controversy surrounding historical social media posts by England players that have come to light since Ollie Robinson's suspension for offensive tweets he posted in 2012 and 2013 as a teenager.

An exchange between Morgan and Jos Buttler is one to have come under scrutiny, but the England skipper said "I don't really reflect on it a lot."

"If I call somebody 'sir', on social media or anywhere around the world, it's a sign of admiration and respect," Morgan added.

"If that is taken out of context, there's nothing I can control or do about it."

Morgan also confirmed that the England T20 team will be "very much aligned" with the Test match side in adopting a similar 'Moment of Unity' prior to their games in the series against Sri Lanka.

During the Test series against New Zealand, players and match officials stood in silence on the outfield before play, with England's players in T-shirts which incorporated anti-discrimination messages on their front and back.