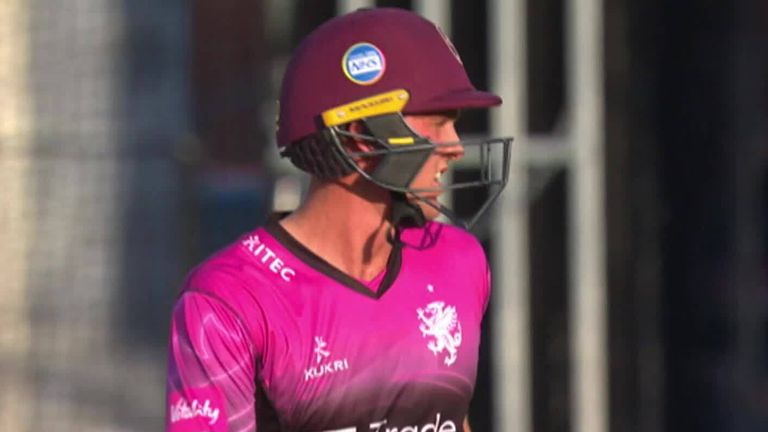 Tom Lammonby smashed a career-best 90 off just 36 balls as Somerset made sure of a home quarter-final in the Vitality Blast and knocked out Gloucestershire with a 23-run win at Taunton.

The 21-year-old blasted 11 fours and four sixes to transform a previously slovenly Somerset innings and lead them to 183-7 after they had been 89-5 in the 15th over.

Gloucestershire, needing a win to qualify from the South Group, replied with 160-6, Ian Cockbain hitting 72 from 46 deliveries in a losing cause.

The visitors initially kept Somerset in check after electing to bowl but that all changed as Lammonby, who came in at 73-4 in the 13th over, cut loose.

The left-hander was on 34 from 19 balls at the start of the 18th over but truly ignited by going six, four six off Daniel Worrall, making good use of the ramp shot, to complete a 22-ball maiden T20 fifty.

He then struck four fours off David Payne in the 19th over and two sixes and a four off Ryan Higgins in the last before he was run out off the final ball having managed 56 from his last 17 balls.

Hampshire stormed to an astonishing six-wicket victory over Glamorgan with 42 balls to spare at The Ageas Bowl as they secured a top-four spot in the South Group.

Having started the day in sixth place, and chasing 185 for victory, the home side needed to reach their target inside 14.1 overs to leapfrog fourth-placed Surrey - and they did so after getting there in exactly 13 overs.

Joe Weatherley struck 43 not out from 13 balls and D'Arcy Short powered his way to 69 from 30, while captain James Vince continued his fine recent form with 39 from 21.

Glamorgan's 184-4 was underpinned by Marnus Labuschagne's 78 from 47 balls and David Lloyd's 52 from 33, while Dan Douthwaite hit an unbeaten 21 from eight balls.

A Gloucestershire win would have knocked Hampshire out but the Bristol side's defeat at Taunton meant the Hawks were celebrating - as were Sussex who beat South Group table toppers Kent to finish third.

The Hove outfit then reached their target in 17.1 overs with Delray Rawlins hitting a 19-ball 33.

Sam Robson was only playing the seventh T20 match but hit 60 as Middlesex beat Essex Eagles by nine runs at Chelmsford.

Robson's knock helped Middlesex reach 169-5 and Afghanistan international Mujeeb Ur Rahman then took 2-18 and Steve Finn 3-25 to limit Essex to 169-5 and ensure the visitors did not finish bottom of the South Group - Glamorgan taking that unwanted place instead.

Chris Benjamin struck an unbeaten 60 on debut as Birmingham reached 191-5 after recovering from 68-4, with Steelbacks making 177-8 in reply.

Rob Keogh struck 55 not out from 33 deliveries for Northants, while Will Rhodes took 3-45 and Jake Lintott 2-19 for the Bears.

Worcestershire were downed by a 61-ball 118 from Leicestershire's Josh Inglis as the Foxes passed their total of 169-6 in 17.5 overs at Grace Road.

Australian Inglis made the Rapids - who would have qualified with a victory - pay for dropping him on 14 by hitting eight sixes and 10 fours in his career-best score.

Ed Barnard hit 43 from 24 balls to top score for Worcestershire, while Jake Libby made 35 and Ross Whitely 31, but no one was able to go on to make the big innings that was needed.

Durham seamer Brydon Carse - who made his England debut during the 3-0 ODI series win over Pakistan - suffered nasty injury after being hit in the ear by a Hales drive as he slipped in his follow through in the fourth over.

Carse, who played no further part in the game after that blow, has had seven stitches with Durham coach Alan Walker telling BBC Radio Newcastle: "Thankfully, it's just stitches and he should be okay. It looked ugly at first, he was tripping up on his follow through and couldn't protect himself."

In Carse's absence, Durham tumbled to 59-6 and were eventually bowled out in 16 overs, with Notts' Calvin Harrison snaring 4-36 from his four overs.