A record crowd of 7,395 packed the Kia Oval as the Oval Invincibles edged out the Manchester Originals in the highly-anticipated tournament opener; Every game of The Hundred will be shown live on Sky Sports The Hundred as well as on Sky Sports Mix 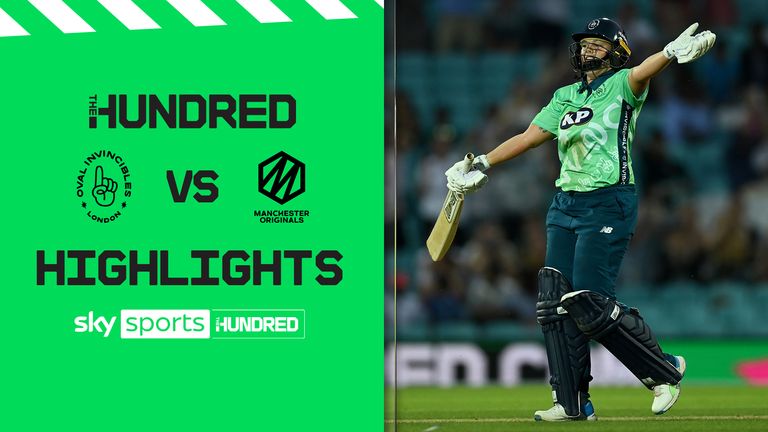 The Hundred's historic opening match on Wednesday was the most-watched women's cricket match in UK history - international or domestic - drawing a peak audience of 1.95 million.

The England and Wales Cricket Board's new 100-ball tournament got off to a compelling start as Oval Invincibles edged out Manchester Originals in the women's competition, in a game shown simultaneously by Sky Sports and on BBC Two.

BBC's coverage attracted a TV audience of 1.6 million at its apex, with a further 180,000 live streams via BBC Sport online and iPlayer, with Sky - showing the match on its marquee Main Event channel, Sky Sports Cricket and free on YouTube - making up the rest.

The Hundred's managing director Sanjay Patel said: "We couldn't have asked for a better start to The Hundred - a thrilling match which went down to the wire, a brilliant atmosphere inside the crowd with lots of families and children, and record figures watching at home.

"The Hundred is all about throwing cricket's doors open for everyone, and the response to last night's game has been remarkable. We know this is only the first game and there is still a lot of hard work ahead.

"We're grateful to Sky for their long-term support for English cricket and especially The Hundred and are excited by the partnership with them and the BBC helping us to reach a broader audience."

Apples and pears🍏🍐❓
Having a bubble 😆❓
April showers ☔️❓

Catch Oval Invincibles vs Manchester Originals from 6pm on Sky Sports The Hundred and our YouTube channel! 📺 pic.twitter.com/lZ2uSgtuGB

A total of 7,395 packed the Kia Oval in London, a record crowd for a standalone domestic match in the professional women's game, and the positive viewing figures broke the record set by the third International T20 match against India last week.

An ECB statement said 35 per cent of all viewers were female, an encouraging sign given the competition's commitment to inclusivity and diversity, with their data also suggesting the launch day was the busiest ever for new ticket sales - more than 11,000 were bought across the 24-hour window.

Each of the games in The Hundred will be shown live on Sky Sports The Hundred, while all women's matches and a significant number of men's games will be streamed live on the Sky Cricket YouTube channel.