Stafanie Taylor (45 off 31 balls) and Anya Shrubsole (40 off 30 balls) rescue Southern Brave from precarious position at 14-3; chasing 134 to win, Nat Sciver hits 44 from 29 balls, but she and Katherine Brunt fall within two balls of each other as Trent Rockets slip to 23-run defeat 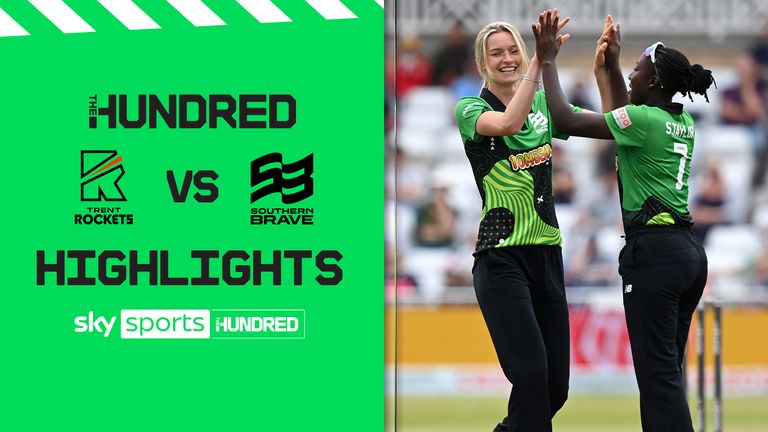 Southern Brave beat Trent Rockets by 23 runs in their opening match of The Hundred at Trent Bridge - the first of four games on Saturday.

Southern Brave, having been put into bat by Rockets skipper Nat Sciver, didn't get off to the best of starts, slipping to 14-3 after just 19 balls - Smriti Mandhana (0), Sophia Dunkley (6) and Danni Wyatt (7) all departing cheaply.

But West Indies batter Stafanie Taylor smashed an unbeaten 45 from 31 balls and Brave captain Anya Shrubsole came in and cracked 40 not out from 30 balls to lift her side up to a score of 133-5.

Anya Shrubsole hits a huge six into the legside off her England team-mate Nat Sciver! BOSH!

It wasn't sure to be a match-winning total, especially when Sciver was at the crease for the Rockets. She struck eight boundaries in her 29-ball 44, but she and Katherine Brunt (22) fell within two balls of each other as the home side ultimately pulled up well short on 110-7.

The wicket of Sciver. It was a wonderful bit of bowling from seamer Lauren Bell (2-23), who took pace off the ball to deceive the batter, bowling the England allrounder.

And a wonderful bit of bowling from Lauren Bell as she bowls Nat Sciver for 44.

Before that, the Rockets had needed a manageable 59 to win from the final 37 deliveries, with Sciver and Brunt in the midst of a 66-run partnership, but two balls later, Brunt was gone too - Taylor (1-26) picking up the wicket - and the Rockets' hopes of victory quickly faded.

Taylor won Hero of the Match honours for her counter-attacking innings to dig the Brave out of the three-wicket hole they were in early on, while she also pitched in with the important wicket of Brunt.

Also, a special mention for Brave skipper Shrubsole. Not only did she play a crucial role with bat in hand, the England World Cup-winning seamer also took four wickets.

Shrubsole smashed five boundaries and one six in her enterprising innings, sharing in an unbroken 76-run partnership with Taylor.

She then picked up the wicket of opener Rachel Priest for four, before returning to snare Abigail Freeborn (10), Heather Graham (24) and Kathryn Bryce (0) in her final five. She finished with impeccable figures of 4-13 from her 20 balls.

Southern Brave captain Anya Shrubsole: "It was not the ideal start to be 57-5 but we back our batting line-up to bat deep and while we thought our total might have been a bit under par we thought it was defendable.

"I'm pleased to pick up a few wickets and to be contributing but the way we bowled as a unit today was exceptional today.

"And the way Stefanie batted - she was positive and aggressive but she did it in such a clever way. She's a world-class performer."

Trent Rockets captain Nat Sciver: "I think so long as me and Kathrine stayed together we had a chance but when two batters who are in get out close together it puts a lot of pressure on the batters coming after.

"It is disappointing, but you can't have a crisis meeting after one game, we're still working out as a team how to build an innings, how to build a partnership.

"Our fielding was brilliant. Being able to perform when there is a crowd in and there is pressure on is difficult but we handled it very well, and that was a pleasing part of the performance."

It's Super Saturday, with not just one, nor two, but three more Hundred games spread across the day!

After the women's clash, the men are in action for Trent Rockets and Southern Brave from 2.30pm.

Also at 2.30pm, Northern Superchargers and Welsh Fire get their double-header under way, with the women's clash followed by the men at 6pm.

Watch live on Sky Sports The Hundred and Sky One, as well as the Sky Sports Cricket YouTube channel.