Southern Brave qualify for the final of The Hundred after sixth win in seven games; Smriti Mandhana profits from sloppy Welsh Fire fielding to score 78 and share century stand with Danni Wyatt as Brave post record 166 from their 100 balls; Fire eliminated after third straight defeat 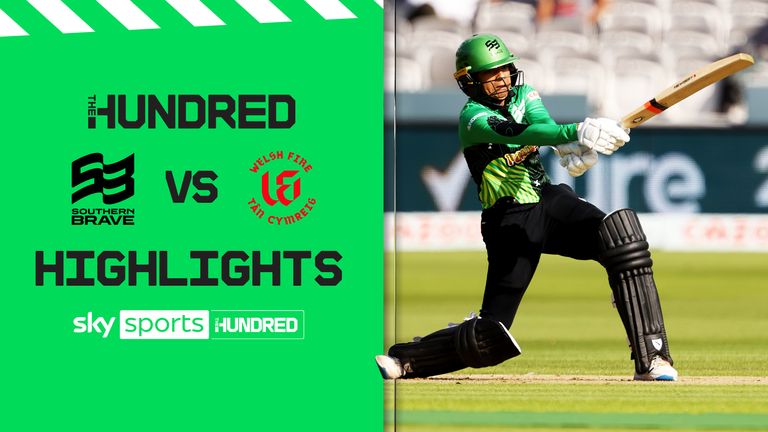 Southern Brave qualified for the final of The Hundred, hitting a record score of 166 in a dominant victory over a sloppy Welsh Fire side who are now out of contention for a play-off spot...

Seven games, six wins and a place in the showpiece game at Lord's later this month confirmed - table-toppers Southern Brave are the standout side in the women's competition in The Hundred.

Yes, they were aided by some sloppy Fire fielding during their latest victory on Wednesday (more on that in a bit) but they have match-winners throughout the team.

There may not be a better opening pairing in the tournament than Smriti Mandhana and Danni Wyatt, who struck 78 off 52 balls and 53 off 34 balls respectively against Fire at The Ageas Bowl - Mandhana with seven fours and three sixes and Wyatt totalling eight fours and one six.

Mandhana and Wyatt shared an opening stand of 107 in just 69 balls in Brave's total of 166-3 - the highest score in the women's competition to date, beating the 151 Trent Rockets hit against London Spirit - while Sophia Dunkley smashed 23 off 13 balls in a late cameo.

Bowling-wise, they have Amanda-Jade Wellington (nine wickets for the tournament), Lauren Bell (seven wickets) and captain Anya Shrubsole (six wickets) but the options are plentiful, with the bowling unit limiting Fire to 127-4 in Southampton. Wyatt following her fifty with the wicket of Bryony Smith. 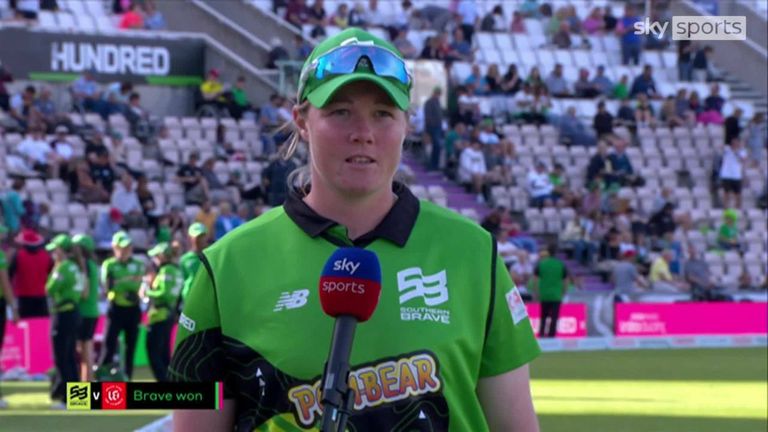 Sophie Luff's side can no longer qualify for the play-offs after suffering a third defeat on the spin and a fifth in seven games.

In their previous two defeats against Trent Rockets and Birmingham Phoenix, the Welsh side suffered extreme collapses after being asked to bat first but this time they made a number of fielding errors after opting to bowl, with Mandhana the chief beneficiary.

The India star was dropped on nought by Alex Griffiths at deep midwicket, caught off a Piepa Cleary no-ball on five, had a slice of fortune on 38 when she edged into wicketkeeper Sarah Taylor's knee, and was then dropped again on 46 when Nicole Harvey spilled a chance off her own bowling.

Fire were also sloppy with their ground fielding as Brave piled on the runs and racked up a total that proved beyond Fire, despite contributions from Smith (33), Georgia Redmayne (35) and Luff (30) - Luff and Redmayne sharing a fifty partnership in a losing cause.

Southern Brave's Danni Wyatt: "Everyone in the top five has won us a game, everyone has a great work ethic and is training really hard and with a purpose and putting their hand up to win games. There is a really nice feel around the group but there are no celebrations just yet."

We are off to Emerald Headingley for Northern Superchargers vs Manchester Originals, with the women's and men's matches live on the Sky Sports Cricket YouTube channel.

The women get things going from 3pm in a game you can also watch on Sky Sports Mix, with second-placed Superchargers looking to maintain their play-off push and rock-bottom Manchester Originals playing for pride.

In the men's game, also available on Sky Sports The Hundred from 6.45pm, both Superchargers and Originals will be hoping to boost their top-three ambitions. Superchargers are currently sixth on five points, one point and one place below Originals.