"We're determined to win this Test match and level the series"; Jos Buttler says England are ready for "one last big push" against India in the fifth and final Test at Emirates Old Trafford; wicketkeeper-batsman also keen to rediscover form after an indifferent red-ball summer with the bat 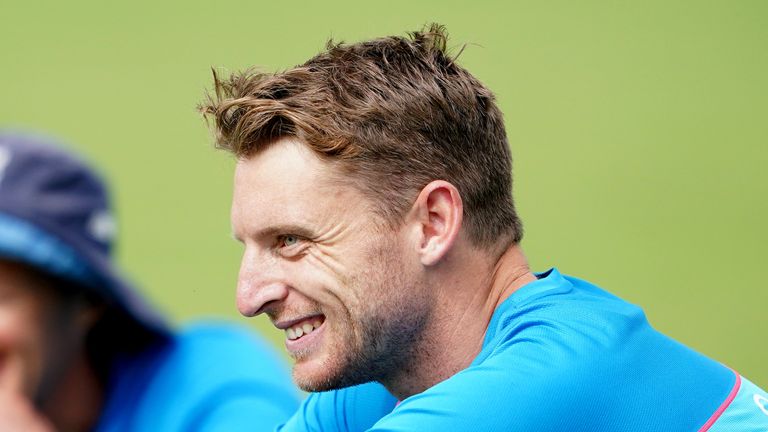 Jos Buttler says England are preparing for "one last big push" in the fifth Test against India as the international summer comes to an end at Emirates Old Trafford this week.

India go into the final match of the series with a 2-1 lead after a dramatic victory at The Kia Oval, a match Buttler missed to be at the birth of his second child.

The England vice-captain is back for the Manchester Test though and says the home side want to finish the season on a high by levelling the series.

"It was a fantastic Test match for the neutrals," Buttler said of the fourth Test.

"The team played some brilliant cricket for large parts of that game but couldn't quite get it done so, as a group, we're determined to win this Test match and level the series.

"Guys have trained well, and spirits are high for one last big push this summer in a must-win game for us. Spirits are still good in the group."

Buttler as an individual also wants to finish the summer on a high after failing to find his best form in Test cricket during a stop-start year due to a mix of England's much-maligned rest and rotation policy and injury.

"I certainly haven't played my best by a long stretch. I've felt like that the whole season," he said. "Throughout the year, certain things being cancelled, picking up an injury makes it hard to find some rhythm but that's on yourself as a player.

"You have to put the work in, train hard and give yourself the best chance when you get in the middle to be there for a long period of time and make some runs.

"Individually, I've been working hard on that and that's the challenge of the game. Can you do the work to give yourself the best chance in the middle?"

Buttler is also hopeful that James Anderson and Ollie Robinson will be fit to play despite undergoing a heavy workload already this summer, shouldering the burden as Joe Root's side have had to deal with a spate of injuries to their fast bowlers.

"They've bowled a lot of overs, they've bowled fantastically well all series and rightfully have taken quite a lot of rest, I think, in the few days since the last game," Buttler added.

"But they seem to be pulling up well. Jimmy, of course, is a very fit guy, looks after himself well and Ollie's exactly the same. So fingers crossed they'll both be in good shape and available for selection."

With Chris Woakes having made a successful return to the side last week in London and Mark Wood also available again after a shoulder injury, England may not feel compelled to play both Anderson and Robinson if doing so might risk their long-term fitness.

Pitches at Old Trafford have also offered plenty of assistance for the spinners this summer and with Jack Leach having been added to the squad, Root and head coach Chris Silverwood also have the option of going in with two spinners.

Buttler, who plays his county cricket at the ground for Lancashire, expects spin to play a part later in the game but is confident that England can read the conditions after winning three Tests out of three at Old Trafford last summer.

"Generally it's a pretty good wicket here," he said. "It looks maybe a little bit drier than some, obviously the weather has been good the last little while but generally the wickets here are very good.

"It may take some spin later on in the game as you'd expect on Test match wickets but we've played a lot of cricket here, obviously last year as well against the West Indies and Pakistan so we should know conditions pretty well and know what to expect."

Watch the fifth and final Test between England and India live on Sky Sports Cricket from 10am on Friday.