The Professional Cricketers' Association has been encouraged by the "healthy culture" in the first-class academies it has visited so far as part of an inclusivity education programme.

The PCA initiative, which has the support of former West Indies paceman and anti-discrimination campaigner Michael Holding, will ultimately be delivered to all 18 first-class academies.

Its foundation precedes the publication last month of a game-wide 12-point action plan to tackle discrimination in the sport, developed in the wake of Azeem Rafiq and others blowing the whistle on their experience of racist abuse at their counties.

The first of the PCA visits, to the Leicestershire academy, took place on November 16 - the day Rafiq gave his harrowing testimony to MPs on the Digital, Culture, Media and Sport committee.

PCA lead personal development manager Charlie Mulraine said: "We were keen to get back into the dressing rooms and find out how academy players felt about the incidences of racism that have been in the press, and to enable them to question them in their own environment.

"It has been overwhelmingly positive and inspiring to see such a healthy culture in our academies.

"There's an understanding that healthy banter is important, but there's a balance and understanding of where the boundaries are in supportive environments.

"Recent news stories have highlighted that cricket needs to have a look at itself, and education is at the heart of that as we've seen from these sessions."

Part of the session includes a video address from Holding, while the players also receive a guide to the Equality Act 2010 and the England and Wales Cricket Board's updated anti-discrimination code.

Derbyshire academy player Tauseef Kataria said: "It was a very good session on how we need to include people from different backgrounds, ethnicities and sexualities, especially given everything that has been going on in the game recently.

"These conversations need to happen. I've personally always felt included at Derbyshire, but that might not be the case in every set-up."

A senior figure within the Quaid e Azam Premier Cricket League in Yorkshire told the DCMS committee that had questioned Rafiq that South Asians "felt like outsiders" even in the grassroots game. 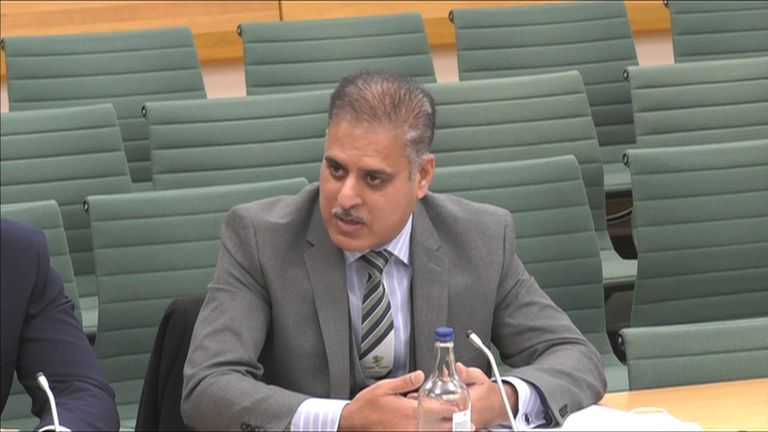 Adil Mehmood, the league's executive finance officer, said on Tuesday: "Within the grassroots level, I play in the Bradford League. Honestly you feel like an outsider - you never gel with the team.

"This is the mindset and the culture within the teams and club and it has been accepted. I've played for three different clubs and I have always felt (like an) outsider, I have never felt part of the team."

Mehmood also talked about the drop-off in representation of Asian players within the grassroots game compared to the professional level - from over 30 per cent to just four per cent.

He said as a 17-year-old he saw lots of younger, talented players from the Asian community, but had not seen anyone progress to county level.

"They were talented enough," he said.

"I don't know what is wrong within the system that they are not making it through."