Jamie Overton took one wicket on his England debut as New Zealand closed on 225-5 on day one of the third Test; he was presented with his cap by twin brother Craig; day two coverage gets underway at 10.15am on Friday, live on Sky Sports Cricket, play starts at 11am

England debutant Jamie Overton admitted it was a special day for himself and his family as he was presented with his cap by twin brother Craig and he hopes they will have the chance to play Test cricket together in the future.

After being brought into the England squad for the third Test against New Zealand in place of the injured Jimmy Anderson, Overton was chosen to step up and made it count, claiming his first Test wicket when he bowled Devon Conway after lunch at Headingley.

Overton, 28, who finished the day with figures of 1-41, revealed the wicket helped to settle his nerves and the next goal is to play in a Test match alongside his twin brother, who has made eight Test appearances for England but missed out on a starting place after being named in the original squad.

"Craig has obviously played a few Test matches and it would have been nice to play together, but to get that [cap] off Craig was a very special moment and hopefully we have got a few more games together," said Overton. 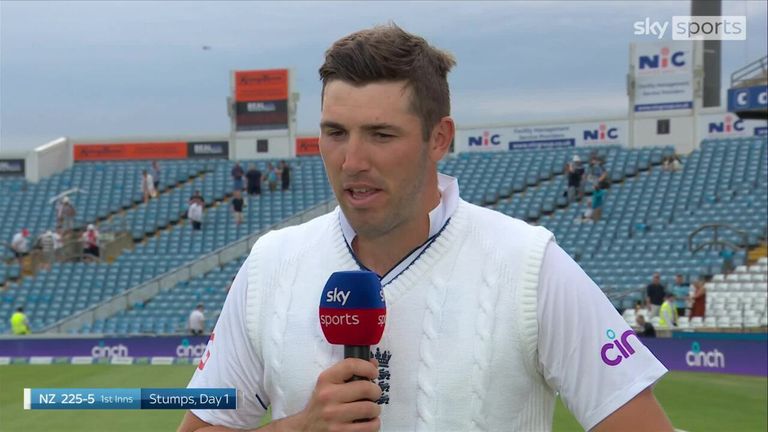 "We have always wanted to play cricket together and Test cricket was the main goal.

"It would have been nice to play together, it was actually between us who was going to play, but he was delighted for me that I was going to get the go.

"Craig got his go before me and then I sort of caught up so it was nice I could kind of catch up with him.

"We didn't play a lot in the backyard because we broke a lot of bats and a lot of windows."

The Surrey man was pleased with how the first day panned out and is hoping to claim more wickets as England look to break Daryll Mitchell and Tom Blundell's unbroken 102-run partnership, which lifted New Zealand to 225-5 at stumps, in the opening session of day two. "I am a bit tired now but it has been a good day and hopefully we can get a few wickets early tomorrow morning.

"I bowled earlier in the week and it felt alright over that side over that hill but there is more of a ridge than you think.

"So the first couple of overs was just getting used to it then settled and felt good rhythms.

"I think the batters are just a higher level, a higher quality.

"You have got to be on the ball the whole time and if you bowl a bad ball it gets hit for four, whereas in county cricket you can potentially get away with that.

"Overall, I felt like I had a good day."

Doull: New Zealand are still in the fight

Despite an impressive bowling performance by England, Sky Sports' Simon Doull believes New Zealand are still very much in the contest after Blundell and Mitchell put together their third 100 partnership across the three Tests. "New Zealand's fightback at the end, they just can't seem to get Daryll and Tom out, this partnership is quite incredible.

"It has thwarted England time and time again.

"If New Zealand can work their way from here to 350, I think it is decent batting first.

"England will want those five wickets in the morning, maybe before lunch and 270 or 280 then they are well and truly into the game."

Day two at Headingley gets under way at 10.15am, with coverage all day on Sky Sports Cricket.