The Hundred: Oval Invincibles retain title after beating Southern Brave in final for second year in a row

Southern Brave suffer dramatic collapse of five wickets for 11 runs as they labour to 101-7 against Oval Invincibles at Lord's; Invincibles top that total in 94 balls after a wobble as they beat Brave in final for second year in a row; Alice Capsey and Marizanne Kapp star Highlights of Oval Invincibles' win over the Southern Brave in the The Hundred final at Lord's.

History repeated itself at Lord's as Oval Invincibles beat Southern Brave in the women's final of The Hundred for the second season in a row...

Brave were bundled out for just 73 en route to losing the 2021 final by 48 runs - and they suffered another dramatic collapse at the Home of Cricket on Saturday, losing five wickets for 11 runs as they were limited to 101-7 during a five-wicket defeat.

Anya Shrubsole's side fought hard with the ball, reducing Invincibles to 59-4 in the chase as openers Lauren Winfield-Hill (5) and Suzie Bates (3) fell cheaply and Alice Capsey's enterprising knock of 25 off 17 balls - during which the 18-year-old was dropped twice - came to an end. 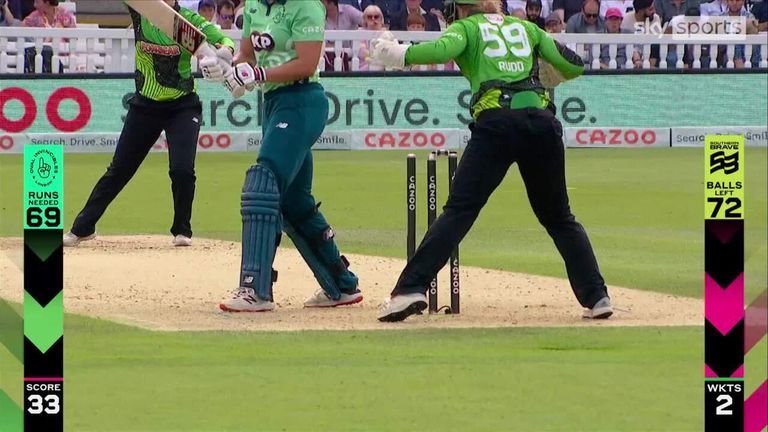 Watch Suzie Bates' unfortunate dismissal as the ball bounces from her bat, off her leg and then hits the stumps!

But - just like last year when she recorded bowling figures of 4-9 from 18 balls and hit 26 with the bat - Marizanne Kapp (37no off 33 balls) starred for Invincibles in the final, guiding her side to their target with six balls to spare, alongside Emily Windsor (13no off 15 balls).

Ultimately, it was the batting that let Brave down as they crumbled from 83-2 after 74 balls to 94-7 after 91 - the innings nosediving once set batters Sophia Dunkley (26 off 23) and Tahlia McGrath (20 off 17) were removed after putting on 44 from 36 deliveries for the third wicket.

Capsey (2-17 off 20 balls) took two wickets in that extraordinary passage of play and then fired fleetingly with the bat, hitting three fours and a six amid being shelled by Shrubsole on five and Smriti Mandhana on 22. 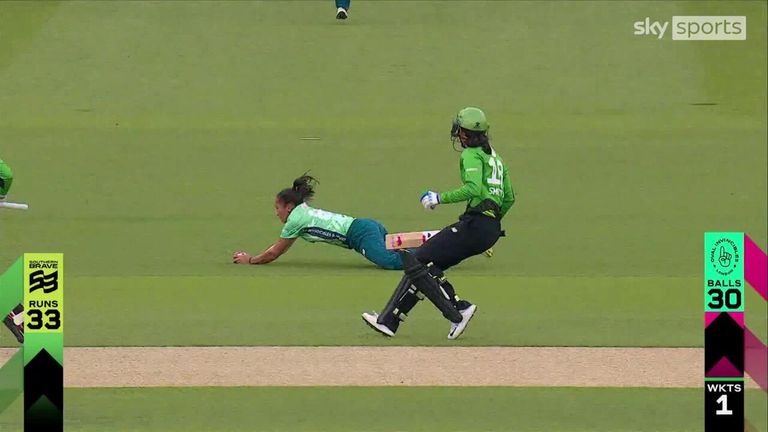 With the bat, Mandhana (17 off 21) and Brave opening partner Danni Wyatt (15 off 16) each made starts before falling caught and bowled to South Africa seamer Shabnim Ismail (2-12 off 20 balls) and 17-year-old spinner Sophia Smale (1-25 off 20) respectively.

Brave scored steadily rather than swiftly, though, and their late collapse left Invincibles heavy favourites at the halfway stage. Invincibles wobbled in the chase but eventually secured victory from the 94th ball of the innings. Oval Invincibles captain, Suzie Bates: "I am a little bit overwhelmed. Everyone has turned up on game day and the way Marizanne batted at the end was awesome. She is one of the best all-rounders in the world and showed she is even better under pressure, while Capsey is a big-moment player. I wasn't here last year but to be a part of Invincibles going back-to-back is amazing. I am pleased with the whole squad."

Kapp: It has been an amazing journey

Match Hero, Marizanne Kapp: "We knew we could do this and everyone has been amazing. Everyone has contributed throughout the competition. You are always nervous in finals,. especially with low scores and the pitch was tough, but we got over the line. I was literally playing every single ball. It has been an amazing journey."

Shrubsole: We'd have been in the game if we made 120

Southern Brave captain, Anya Shrubsole: "We obviously came here wanting to win, we feel like we've played good cricket throughout the competition and we just fell short in the final.

"In the end we were probably 15 to 20 runs short. I think if we'd have got 120 we'd have been right in the game. Even if we'd been flawless with the ball and in the field it might have been enough but it wasn't to be."