George Balderson finished with five for 14 from seven overs, supported by Will Williams, who returned four for 24; Lancashire beat Essex by 38 runs in a match that spanned just a little over four sessions

George Balderson claimed a hat-trick to wreck Essex's hopes of victory in a match at Chelmsford that spanned just a little over four sessions as Lancashire won by 38 runs.

The pace bowler finished with five for 14 from seven overs, supported by Will Williams, who returned four for 24 as Essex lost their last nine wickets for 35 runs in pursuit of 98 to win.

Only two Essex batters reached double figures against the telling and incisive bowling of the Lancashire duo, who helped their side to 19 points, whilst the hosts were left with a paltry three points after a dramatic Championship clash. 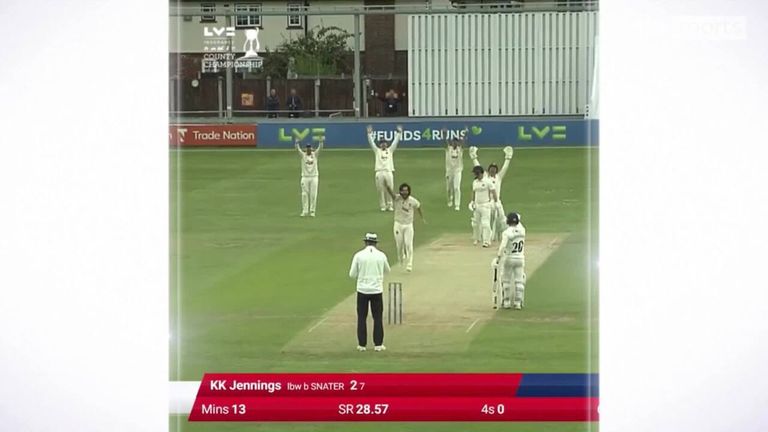 The demons of the previous day, when 26 wickets fell, continued to manifest themselves. Lancashire had resumed their second innings on 25 for six and lost another wicket 20 balls into the morning play.

Debutant George Bell had looked settled while moving on to 24, the equal-highest score by a Lancashire player in the match.

However, his 28-ball knock ended when he was bowled around his legs by Shane Snater to reduce Lancashire to 34 for seven. Snater had taken five for six in 4.2 overs at that stage.

The two Toms, Bailey and Hartley, both hit successive boundaries in an uncharacteristically wayward over from Sam Cook that cost 17 runs. Bailey then threw the bat to the first ball of the next over, only to pick out Dan Lawrence on the long-leg boundary and hand Snater his sixth wicket and stunning figures of six for 10.

Cook gained a measure of personal satisfaction when Hartley attempted an upper-cut to a short ball and only succeeded in edging behind. It was Cook's 200th first-class wicket for Essex.

Simon Harmer had the last word when he struck Matt Parkinson full on the front pad to end the visitors' second innings inside 24 overs for a paltry 73.

All-rounder Snater, Essex's player of the year, was rewarded for a breakthrough season with his county cap during the lunch interval.

With the floodlights on throughout the day, the home side, seeking a third successive Championship victory in September, set out on the task of reaching a modest 98 runs for victory but, on this pitch, it was a tortuous task.

Sir Alastair Cook and Nick Browne made a comparatively serene start to the chase, and had 24 on the board in seven overs to ease the nerves of the home camp when Browne was trapped lbw by Bailey.

But the introduction of Balderson sent panic waves through the home camp.

With his second delivery he had Cook beaten all ends up by one that ducked in and dislodged his leg bail.

His next ball had Lawrence chipping carelessly to Williams at mid-wicket before the bowler breached Matt Critchley's defences to claim his hat-trick.

Lunch arrived soon afterwards with Balderson feasting on figures of 2-2-0-3, while Essex tottered on 34 for four.

The latest sacrificial lamb on a wicket denounced as unplayable by Lancashire head coach Glen Chapple was Feroze Khushi, bowled by Williams for a single as Essex wobbled further to 35 for five.

Adam Rossington opted for aggression and collected two boundaries before Balderson wiped him out and, with the score on 55, Essex lost their seventh and eighth wicket, both to Williams.

During all the carnage, skipper Tom Westley had stood firm but he finally succumbed for 13 having survived 41 balls when he was caught to become a fifth wicket for Balderson.

Williams rounded off proceedings when he bowled Sam Cook to leave Lancashire celebrating victory in a match in which the four innings produced just 370 runs.

Elsewhere, Surrey took a step closer to winning their second title in five years after forcing Yorkshire to follow-on at the Oval.

The hosts' relentless seam attack bowled Yorkshire out for 179, and when bad light stopped play the visiting side were 89 for two, 65 behind, with Adam Lyth unbeaten on 36.

Jack Leaning celebrated his second century of the season to boost Kent's hopes of avoiding relegation as they set Hampshire 378 to win.

Stand-in captain Leaning struck 112 as Kent totted up 269. It meant Hampshire, who had seen Mohammad Abbas claim four for 68, required the fifth-highest chase in their history to keep themselves in the title race, with Surrey highly likely to pick up a win and six bonus points.