Here's what's in store in the Indian Premier League today...

The Kings XI Punjab look to end their recent poor form - losing four of their last five - against the Royal Challengers Bangalore, who will be eliminated from playoff contention with defeat but would drag Kings XI into the dogfight with victory - join us from 3pm, live on Sky Sports Cricket and Main Event.

How have the teams done so far?

RCB will take encouragement from not only the fact that Kings XI have been on a bit of a losing run of late, but that they got the better of their opponents in their meeting earlier in the tournament - AB de Villiers firing a 40-ball 57 as they successfully chased down 156.

De Villiers was at it again on Saturday, as well as RCB key man and captain, Virat Kohli, in their latest win over the Delhi Daredevils, as both fired fifties to hunt down a testing target of 182 with an over to spare. Kohli (70 off 40) struck seven fours and three sixes, while De Villiers (72no off 37) blasted four boundaries and six sixes - the last of which to win the game in style.

Kings XI have stuttered of late, their latest defeat to the Kolkata Knight Riders on Saturday seeing them concede a massive 245 runs! In reply, KL Rahul continued his fine form with a third consecutive fifty - smashing 66 from 29 balls - but it wasn't enough to lift the team up anywhere near the steep target as they slipped to another defeat.

As always with RCB, Kohli and De Villiers are the ones to watch - pure box office! De Villiers, in particular, is having a fine IPL 11, striking the second-most sixes in the tournament, with 29. Delhi's Rishabh Pant, who has the most with 31, has played in three more games than the South African batting superstar.

For Kings XI, there's not just the threat of Rahul at the top of the order, but a certain IPL heavyweight in the form of Chris Gayle. He started his stint with his new franchise in sensational form, smashing three fities and a century in his first five games, but has scored only 8, 1 and 21 in his three innings since. But, there's nothing like revenge against his former Bangalore team-mates to get him fired up for this one. Also, Kings XI have the IPL's leading wicket-taker in Andrew Tye on their books - 20 wickets in 11 matches, including four in each of their last two outings. 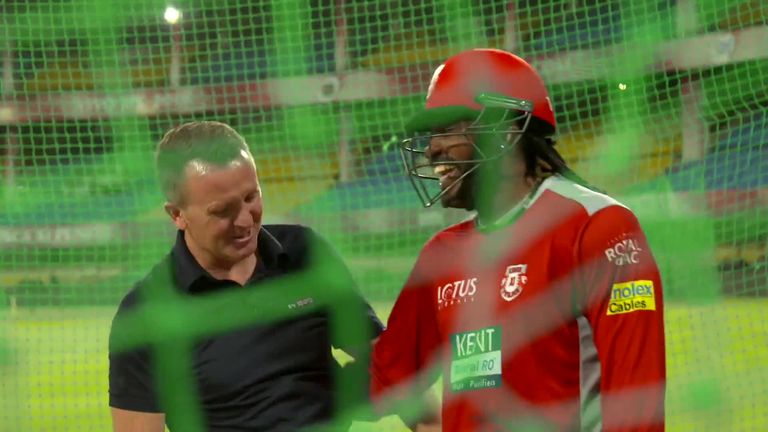 Which England players could feature?

After a long wait, Moeen Ali finally made his IPL debut for RCB against Sunrisers Hyderabad a week ago on Monday, and stayed in the side for the crucial win over Delhi. His success has come with the ball so far, making up for scoring a combined 11 runs with the bat by conceding at an economical 6.28 runs an over, and returning particularly impressive figures of 1-25 in that Daredevils win.

Chris Woakes, meanwhile, continues to wait in the wings - he claimed eight wickets through the first five games of the tournament for RCB, but went for a lofty 10.36 an over and has sat out since. However, the man who replaced him, Tim Southee, conceded 41 from his four wicketless overs against Delhi - could that signal a return for Woakes?

Who's in the Sky Sports studio?

Two men with plenty of IPL experience, Michael Lumb, as a player, and Mark Butcher, with a watching brief, join Matt Floyd in the studio.

Sky Sports will continue to show every IPL game live, so fans from all over can enjoy the best of Indian cricket.