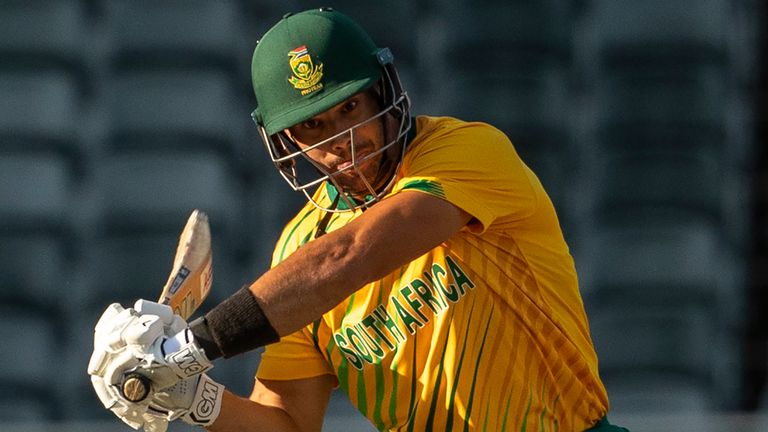 Highlights from the second T20 international in Johannesburg as South Africa romped to a six wicket win with six overs to spare.

South Africa romped to a six-wicket win over Pakistan in the second T20 international in Johannesburg, chasing down their 141-run target with a massive six overs to spare to level the four-match series at 1-1.

Aiden Markram cracked 54 off 30 balls at the top of the order for the Proteas, who were never really troubled by Pakistan's paltry total on a good batting pitch. Stand-in skipper Heinrich Klaasen finished the job off with an unbeaten 36 from 21 deliveries.

Pakistan had earlier won the toss and opted to bat first, but their innings got off to the worst possible start when Mohammad Rizwan - who struck a match-winning 74 not out in the series opener - fell first ball.

Rizwan skied left-arm-spinner George Linde's first ball high into the air and to Markram at mid-off. Linde also picked up Rizwan's opening partner Sharjeel Khan (8) in near identical fashion in his next over on his way to fine figures of 3-23 from his four overs.

The classy Babar Azam rebuilt the innings, scoring a run-a-ball fifty, being ably supported by 40-year-old Mohammad Hafeez, who chipped in with 32 from 23 balls.

But when Hafeez nicked off to Linde in the 11th, the Pakistan innings lost its way. Faheem Ashraf (5) endured a frustrating 10-ball stay at the crease, while Hasan Ali briefly fired with back-to-back sweetly-struck sixes off Lizaad Williams (3-35) before holing out when looking for a third.

Babar brought up his fifty in the 18th over, but was then sent packing by Sisanda Magala (1-32) two balls later as he chopped one back onto his stumps and Pakistan ultimately limped their way to a score of 140-9.

South Africa never looked troubled in their reply as they reached their target with 36 balls left in a comprehensive win for a side missing seven leading players either to injury or to play in the IPL.

Of Markram's 54 runs, 46 of them came in boundaries as he smashed seven fours and three sixes in his aggressive knock.

His aggression eventually cost him his wicket to legspinner Usman Qadir (2-26), ending the ninth over by holing out to long-on, but Klaasen and Linde (20no off 10) comfortably steered South Africa to a convincing four-wicket win.