England's Rawalpindi problem - how do you take 20 Pakistan wickets on a pitch that resembles 'a road'?

Pakistan openers Abdullah Shafique and Imam-ul-Haq finish the day with an unbeaten 181 partnership; Harry Brook's 153 helps England to 657 all out; watch day three of Pakistan vs England live on Sky Sports Cricket from 4.30am on Saturday (first ball 5am) 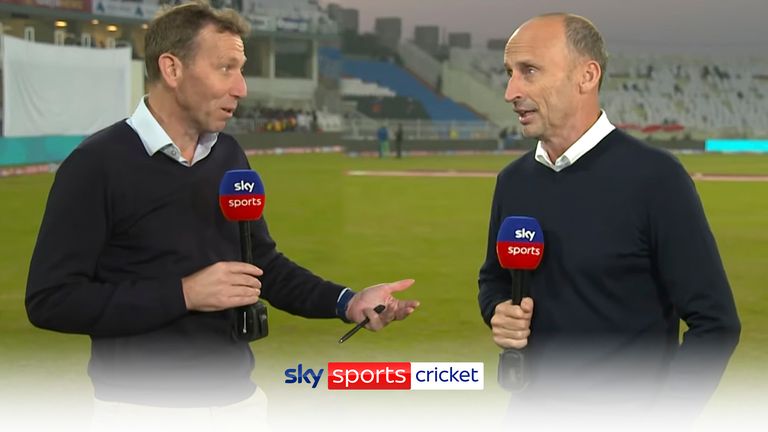 Nasser Hussain hails the 'brilliant' Harry Brook for his 153 against Pakistan and assesses the efforts of England's bowlers on a flat Rawalpindi surface.

After an exhilarating performance with the bat, England were brought straight back down to earth as Pakistan made them toil with the ball on day two of the first Test in Rawalpindi..

Led by four centurions, England set the hosts an imposing target after being bowled out for 657 on the second day.

In response, Pakistan's openers shared a 181-run partnership as England searched for wickets without any success.

After the end of the second day, Nasser Hussain described the pitch as an "absolute road", while Ramiz Raja, the Pakistan Cricket Board's chairman, described it as "embarrassing for us".

Hussain said: "It's cool here, its 22 degrees. We've not had a lot of sunshine. There's not a lot of play on this pitch because you keep going off at 4.40 in the evening. Plus, you've got a Kookaburra ball that goes soft, on a pitch that's not deteriorating.

"They knew it was going to be hard work. I like the plan towards the end, the short pitch bowling, they nearly got one down the leg side. All you can do is keep going, its more about your mental and physical strength. You have to believe something can happen." 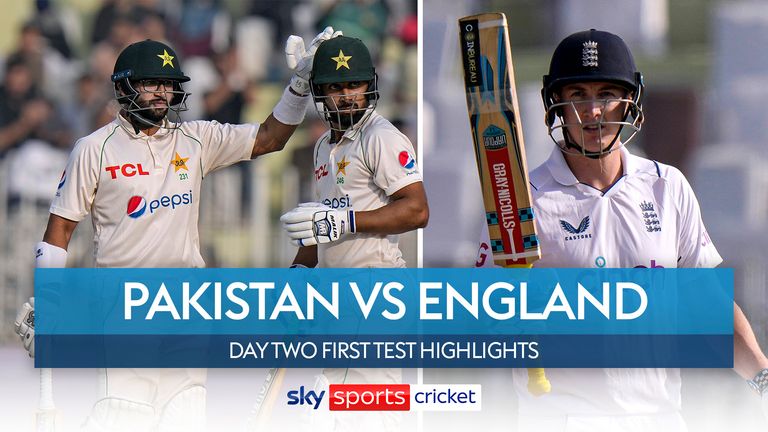 Highlights from day two of the first Test between Pakistan and England in Rawalpindi.

England's lead remains huge at 476, but the problem now is working out how to take the 20 wickets required for a series lead on a surface that seems more akin to the M25 than a cricket pitch.

England's bowlers were good but not spectacular: there was no swing on offer first up for the seamers or reverse swing with the old ball, while the spinners couldn't create any meaningful chances.

Ben Stokes varied his field and tactics, deploying short balls in his three-over spell, while debutant Will Jacks got a bit of joy bowling outside off stump.

"It's gonna be tough to get 20 wickets, but we're going to give it a crack, and hopefully it can go in our favour," he said.

"If we start there, hopefully we can get a few LBs which keep low and, obviously, we tried the bouncers; it's just about striking at the right time and going bang, bang really."

But with only two front-line seamers and Stokes, England will need contributions from Jack Leach, Jacks and Joe Root.

Leach was solid but unspectacular, and Hussain said that he needs to work on getting a bit more drop on the ball to become a wicket-taking bowler. 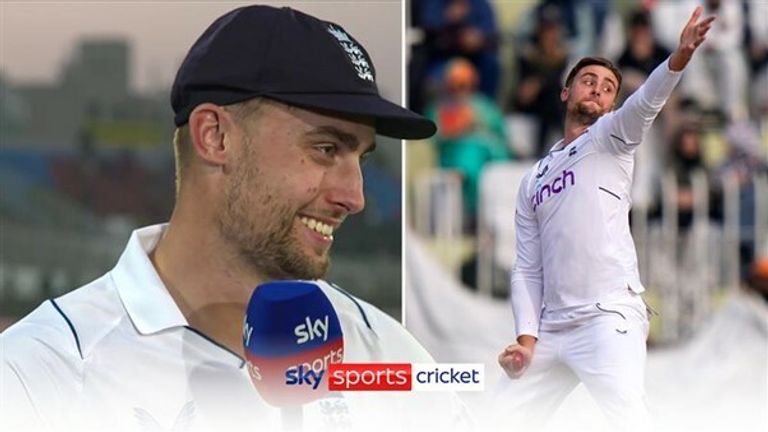 Will Jacks talks about his England Test debut, playing under captain Ben Stokes, and a tough afternoon in the field in Rawalpindi.

"England will have to try and keep control of the run-rate and if a door opens, and it starts reversing, then try and pounce. It's going to be a pretty slow game for a little while yet," he added.

England's breakthrough might come through a surprise package. Jacks didn't threaten initially when bowling stump to stump, but he changed his line and got some joy, creating half chances when floating the ball up outside off.

"There is a little bit there, it's only day two, we're hoping the grip will increase over the next few days. I was going stump to stump but there wasn't a lot there. It's about being open to ideas, and Stokes is very creative," he said.

Without Liam Livingstone, who was forced to leave the field with a knee injury, Jacks might become even more important with the ball.

Whether it's through the spinners or seamers, England will hope for quick wickets on Saturday morning.

Watch day three of Pakistan vs England live on Sky Sports Main Event and Sky Sports Cricket from 4.30am on Saturday, with the first ball from 5am.