Are bamboo bats the future in cricket? University of Cambridge study talks of more sustainable option to willow

MCC statement on bamboo cricket bats: "Currently, law 5.3.2 states that the blade of the bat must consist solely of wood, so for bamboo (which is a grass) to be considered as a realistic alternative to willow would require a law change" 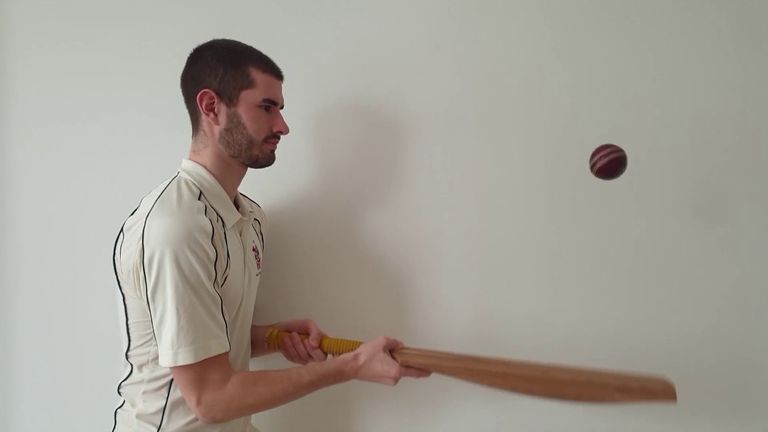 Traditionally cricket bats are made out of willow but could bamboo be a more sustainable option in the future?

There are few things quite so synonymous to a sport than the sound of leather on willow is to cricket. But could that be about to change with the introduction of a bamboo cricket bat?

Dr Darshil Shah and Ben Tinkler-Davies have conducted research into bamboo cricket at the University of Cambridge Faculty of Engineering, with Tinkler-Davies telling Sky Sports News that the alternative to willow is more sustainable, has a bigger sweet spot and, of even greater news to your amateur cricketer, the ball is less likely carry to slip when the edge is found.

The use of bamboo in cricket bats is termed 'illegal' under current laws by the MCC, but the body has said in a statement it welcomes the exploration of alternatives to the willow blade.

Advantages of a bamboo bat

"It's very consistent across the whole material, which is one of the reasons we chose bamboo to have a look at," Tinkler Davies said. "And there's so little wastage, compared to a willow cricket bat.

"The trees grown for willow, there are natural defects in them; when we've talked to manufacturers, up to 20 per cent is turned into cheap firewood, due to water seepage and other problems with the wood.

"With bamboo, there are very few, if any, sections which need to get thrown away. So it's great for sustainability and it's a really cheap material to use.

"We've got bamboo growing in India and China, right next to where it's being manufactured, so we'd cut out 50 per cent of the emissions just through the transport of the cricket bats.

"We believe it's going to be much more eco-friendly as a material and also as a manufacturing process."

How does a bamboo bat perform?

Tinkler-Davies added: "The things you're looking out for in a cricket bat are: 'high stiffness' so that when a player hits the ball, you're going to transfer the most energy for the ball to go the furthest; and you want it to be quite lightweight.

"What we've found is, that although the bamboo is denser, heavier than a willow bat, it outperforms it across every other metric: it's stiffer, harder and better under bending.

"This means we're able to make thinner bats which are as strong as willow bats. While they might end up being the same wight, the bamboo bat is going to require a lot less material.

"And for the purist of the game, you don't need to worry about losing that traditional sound of leather on willow. When we took to the nets, we couldn't tell the difference, and we backed that up by taking it to the lab, testing them both out and they came back with almost identical results.

"We ran a lot of computer simulations, to see what happens when the ball impacts the bat at certain points. From this, we found that the sweet spot of a bamboo bat is both wider and longer.

"If you mistime a shot with a bamboo bat, you're much more likely to hit the middle of the bat - which will mean it goes further and faster.

"And another odd advantage is that, around the edges of the bat it actually performs less good than willow. So, if you completely mistime a shot and it comes off the edge, it's not going to go as far and, therefore, you're less likely to get caught.

"So you've got this strange kind of double benefit: the middle is really good and strong, but the outside less so, so you're less likely to get out."

"One of the main disadvantages is that it's very heavy," Tinkler-Davies said. "We made a prototype bat and it was 40 per cent heavier than a willow. But that was based off a 2016, classically-shaped bat.

"The next stage of our project is to take the better material properties and make a thinner bat which, although would be the same weight as a willow, it hopefully should have better properties."

What is the MCC's response?

In a statement released on Tuesday, the MCC said: "The MCC has read with interest the research study from the University of Cambridge.

"Currently, law 5.3.2 states that the blade of the bat must consist solely of wood, so for bamboo (which is a grass) to be considered as a realistic alternative to willow would require a law change.

"The law would need to be altered to allow bamboo specifically, as even if it were to be recognised as a wood, this would still be illegal under the current law, which bans lamination of the blade, except in junior bats.

"MCC's role as Guardian of the Laws includes maintaining the balance between bat and ball, and any potential amendments to the Law would need to carefully take this into consideration, particularly the concept of the bat producing greater power."

However, the MCC added: "Sustainability is a relevant topic for MCC and indeed cricket, and this angle of willow alternatives should also be considered.

"With the researchers stating that the most suitable types of bamboo grow abundantly across China and that low-cost production could make bamboo bats a viable and ethical alternative to willow, this could provide a pertinent angle for further research and the possibility of reducing the cost of producing bats in different areas of the world."

The MCC said it will discuss the matter at its next laws sub-committee meeting.

Tinkler-Davies said of the MCC and its current Laws: "We have reached out to them and hopefully we'll hear back.

"We feel the advantages massively outweigh the disadvantages, so it would be great to start working with the MCC.

"Bamboo is technically a grass. However, you look at a bamboo plant and it's very different to the aluminium bat Dennis Lillee used.

"It's not miles away from the realm of possibility that this could be used in the near future.

"Look at 100 years ago, we didn't have DRS. This is not currently within the rules, but it's not a massive hop, skip and a jump for it to be an easy change.

"It has been great to see the massively positive feedback we've had from the cricketing community. We expected questions and reservations, but at this point in time we need to be looking to the future and sustainability. Cricket could be a real leader in that.

"Hopefully one day we'll have a professional player walking out into Lord's holding a bamboo cricket bat."