"Written off" Australia rally from five series defeats in a row to win sixth World Cup title and first in T20 format; David Warner and his power-packed pals see off New Zealand in the final and will now head into The Ashes next month in a confident frame of mind

In the end, it was somewhat of a demolition job.

Mitchell Marsh struck an unbeaten 77 from 50 balls, David Warner tonked 53 from 38 and Glenn Maxwell biffed 28 not out from 18 as Australia topped New Zealand's total of 172 with seven balls to spare - a pretty decent margin when it comes to T20 cricket - to win by eight wickets.

Australia's firepower told in the T20 World Cup final, as many pundits, including Shane Watson and Simon Doull, had predicted beforehand.

The bare statistics show that Australia only edged the boundary count by two, nailing 23 fours or sixes to New Zealand's 21, but take out Kane Williamson's tally of 13 (10 fours and three sixes) and the Black Caps only hit eight. They would have been nowhere without their influential skipper.

Williamson's 85 from 48 deliveries was a work of art and showed that T20 cricket is not purely about brute force.

He caressed and finessed his way through his innings, having been given a reprieve on 21 by a dropped catch from Josh Hazelwood - a rare blemish on both the night and in the tournament for the Australia fast bowler.

Williamson whipped a superb one-handed six off Maxwell and lofted Marsh exquisitely over extra-cover for four but it was Mitchell Starc whom he really dominated, ensuring the left-arm quick's 11th over - which included that Hazlewood drop - went for 19 and then plundering 22 from his 16th.

Sure, the 16th over began with a couple of slashed boundaries but they were followed by a supreme six off his pads over square leg, a delicious four over point as he opened the face and then another top-notch boundary through third man as he deflected away a slower ball.

Unfortunately for New Zealand, Williamson's artistry was not backed up with power from elsewhere.

Opening batter Martin Guptill, who we know can provide ample muscle, stuttered his way to a 35-ball 28, while the Black Caps could only score 36 runs from the final four overs. Not a shabby total, but not as many as they would have hoped for.

Had they got up to, say, 185, Australia could have had an extremely challenging total on their hands, even if the obvious benefit of batting second under the lights may still have had them as favourites.

The fact New Zealand recorded their lowest powerplay score of the tournament - 32-1 - may have been in some part down to a lack of intent, but it was down in large part to the excellence of Hazlewood, whose three metronomic powerplay overs were taken for a grand sum of 11.

Hazlewood's early efforts, plus his two-wicket, five-run 18th over which included the scalp of Williamson, allied with Australia's firepower, ensured New Zealand did not have quite enough. It was disappointment in a white-ball final yet again for the Black Caps, following on from 2015 and 2019.

For Australia, though, it was a sixth World Cup title overall, a first in the T20 version, and a triumph that few had forecast before the competition began, following a torrid run recent run in the T20 format which had seen them lose five series on the trot, including 11 matches out of 15 in 2021.

"Written off" was how Finch described his side - something they were again after an eight-wicket drubbing by a Jos-Buttler inspired England in the Super 12 stage - but, as we know now, they really shouldn't have been. 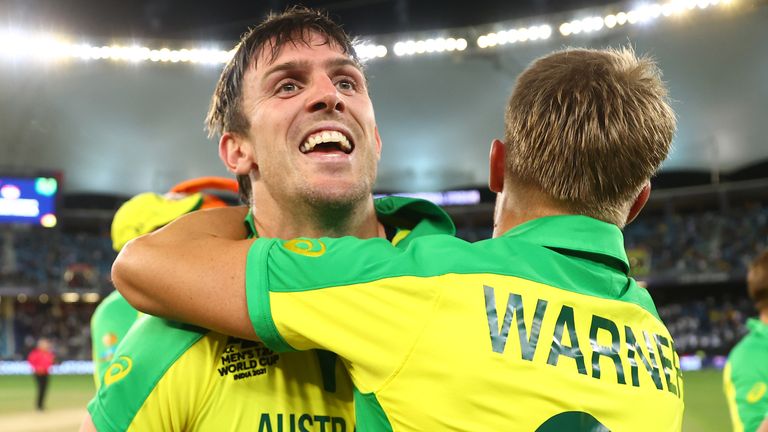 As disappointing as 4-1 reverses in Bangladesh and West Indies would have been for Australia - they were rolled for just 62 in one game in Bangladesh - those results were suffered without first-teamers Warner, Maxwell, Marcus Stoinis, Steve Smith and Pat Cummins.

With them back, Australia were a different, winning beast.

Warner was the standout returnee, going on to be named Player of the Tournament at the T20 World Cup after having been axed as Sunrisers Hyderabad captain and then dropped by his IPL side altogether.

Fears over Warner's form were not assuaged - externally at least - by innings of nought and one in Australia's warm-up matches and then a knock of 18 in the narrow victory over South Africa, but he then struck 65 against Sri Lanka before coming alive at the back end of the competition.

There was an unbeaten 89 against West Indies to take Australia into the semi-finals, 49 - and potentially a whole lot more if he had reviewed his caught-behind dismissal off Shadab Khan - against Pakistan in the last four and then that rapid half-century in the final against New Zealand. Only Pakistan captain Babar Azam topped Warner's run haul of 289.

The last of those knocks, against New Zealand, nailed Warner's Player of the Tournament gong - a prize Finch said he had predicted his opening partner would win a few months back.

"Without a word of a lie, I promise you, I called (head coach) Justin Langer a few months ago and said, 'don't worry about Davey, he'll be man-of-the-tournament," said Finch.

"He's one of the all-time great batters. And he's a fighter. He's someone who when his back is against the wall, that's when you get the very, very best of David Warner."

Finch had said before the final that the thrashing by England had "refocussed" Australia and showed them they had to play "positive, aggressive" cricket to win the World Cup. They ended up doing both.

Now it's red-ball success Australia want. White-ball specialist Finch will not be involved in The Ashes, but at least five of his T20 champions will be - Warner, Smith, Cummins, Hazlewood and Starc.

A confident, energised, used-to-winning Australia. Not what you want to hear if you're England…