T20 World Cup: A graveyard for the favourites... all the top stats ahead of 2022 edition in Australia

Hosts and defending champions Australia are viewed as the team to beat at the 2022 Men's T20 World Cup - but perhaps they won't be relishing that tag.

In every edition of the competition so far, the pre-tournament favourites have failed to lift the trophy, with India suffering that fate last year in the United Arab Emirates following a group-stage exit.

That stat is one of many Sky Sports Cricket's Benedict Bermange has uncovered as he reels off some of the top numbers from each of the seven World Cups to have been staged to date.

0 - none of the pre-tournament favourites have won the competition. India were the 5/2 favourites ahead of the 2021 World Cup with eventual winners Australia back at 6/1. When England won in 2010, they were 14/1 at the start

1 - Chris Gayle is the only player to carry his bat through a completed all-out innings in T20 World Cup cricket. The Jamaican made an unbeaten 63 out of the West Indies' 101 all out against Sri Lanka at The Kia Oval in 2009

5 - the number of wickets that fell in Australia's final over against Pakistan at St Lucia in 2010. Mohammad Amir took three wickets and the other two fell to run outs without a run scored

6 - only one player has taken six wickets in an innings, with Sri Lanka spinner Ajantha Mendis bagging 6-8 against Zimbabwe at Hambantota in 2012 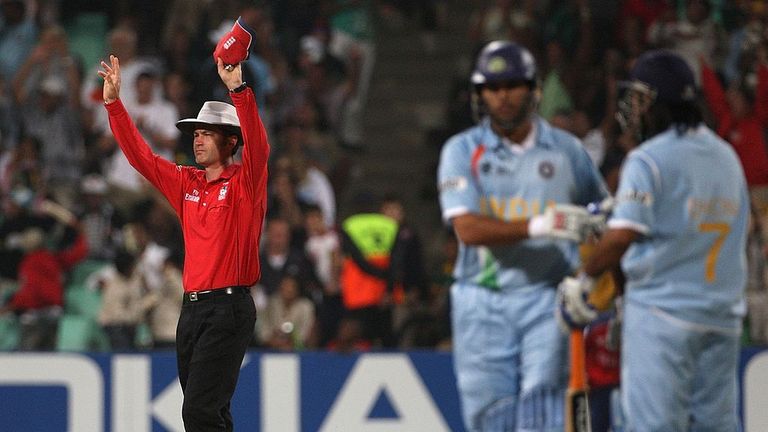 35 - the most matches played by anyone in the tournament, with Sri Lanka's Tillakaratne Dilshan featuring in 35 matches from 2007 to 2016

39 - the lowest total in the tournament's history with Netherlands bowled out for just 39 against Sri Lanka at Chittagong in 2014. They did little better against the same team in 2021, making just 44 that time

64 - Sanath Jayasuriya conceded 64 runs in his four overs for Sri Lanka against Pakistan at Johannesburg in 2007, the most expensive spell in the competition's history

1,016 - Sri Lanka legend Mahela Jayawardena's tally of runs remains the highest aggregate by anyone across the tournament's history

Watch the T20 World Cup live on Sky Sports from Sunday. England's first game is against Afghanistan on Saturday, October 22, with build-up starting at 11.30am on Sky Sports Cricket ahead of a midday start.