India beat Bangladesh by five runs on DLS in thriller; Bangladesh fall short in revised chase of 151 from 16 overs with Litton Das run out for 60 from 27 balls after slipping on wet pitch; Virat Kohli hits another fifty and becomes leading run-scorer in Men's T20 World Cups Virat Kohli became the leading run-scorer in the history of the Men's T20 World Cup before India saw off a superb onslaught from Bangladesh opener Litton Das to close out a narrow five-run DLS win at Adelaide Oval and move closer to the semi-finals.

Kohli (64no from 44 balls) followed his unbeaten 83 against Pakistan and 62 not out against Netherlands with a third fifty in four innings as India posted 184-6, a total in which opener KL Rahul contributed 50 from 32 deliveries.

Kohli eclipsed Mahela Jayawardene's record of 1,016 runs across all Men's T20 World Cups during a second-wicket stand of 67 from 37 balls with Rahul, while he clinched a 37-ball half-century in the 17th over before helping his side plunder 24 from the final eight balls.

Litton (60 off 27) crunched a 21-ball fifty in reply as Bangladesh raced to 66-0 in the seven overs before a rain delay, with the Tigers 17 runs ahead of the DLS par score of 49 at that point.

Litton hit three fours off Arshdeep Singh in the second over, three boundaries in a row off Bhuvneshwar Kumar in the third, a stunning scoop for six off Bhuvneshwar in the fifth and then two fours and six off Mohammed Shami in the sixth, with the maximum over deep square leg taking him to an eighth T20 international fifty.

When play resumed, despite the outfield still visibly drenched, Bangladesh were set a revised 151 from 16 overs, meaning they needed a further 85 from the remaining 54 deliveries.

Their hopes were dealt an almost immediate major blow when Litton was run out by Rahul's direct hit from deep midwicket, with Litton angry after slipping on the damp pitch for the second ball in a row. 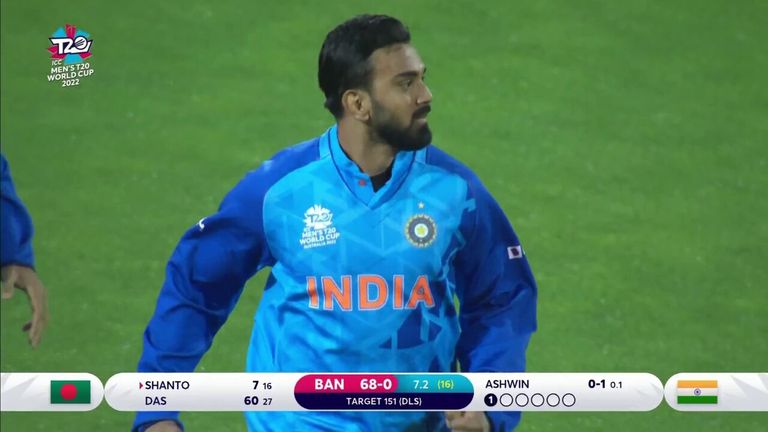 Wickets then began to tumble - Bangladesh losing 4-9 in 11 balls at one stage as India held a number of fine catches - but the Tigers had faint hope when Nurul Hasan hauled Arshdeep for six over the leg-side in the final over to cut the requirement to 13 from four balls.

Nurul then slashed the penultimate delivery behind point for four but with six needed from the last ball to force a Super Over, he could only knock away a single as Bangladesh ended on 145-6.

India have moved onto six points from four games in Group 2 after bouncing back from their five-wicket defeat to South Africa last weekend, with victory over Zimbabwe in Melbourne on Sunday, or a washout, now good enough to clinch a last-four place.

Bangladesh are not out of contention but will need to beat Pakistan in Adelaide on Sunday and hope other results go their way if they are to make the semi-finals for the first time.

Bangladesh limited India to 37-1 in the powerplay after winning the toss - Hasan Mahmud (3-47) having Rohit Sharma caught for two after dropping him on one - but Rahul then accelerated before falling one delivery after nailing a 31-ball fifty.

Shoriful Islam's ninth over was taken for a whopping 24 runs with Rahul slamming two sixes, including one off a no ball, and the opener and Kohli also helping themselves to a four each.

Suryakumar Yadav - who has just ascended to the top of the T20 international batting rankings - fired fleetingly with a 16-ball 30 which included three fours in Mahmud's 13th over, before Hardik Pandya (5), Dinesh Karthik (7) and Axar Patel (7) came and went as the innings started to stall.

However, Kohli struck back-to-back boundaries off Mahmud at the end of the 19th over and Ravichandran Ashwin (13no off 6) then mowed successive boundaries off Shoriful in the last, including six over deep square, as the bowler finished with figures of 0-57 from his four overs.

First, he edged just short of wicketkeeper Karthik on nine, before being dropped by the India gloveman on 27 as Karthik leapt one handed to his right.

Litton then made his ground just in time to avoid being run out by Kohli's direct hit from mid-on on 33.

Litton was short of his ground when he stumbled and Rahul shot down the stumps from the second ball after the restart and a spirited Bangladesh subsequently fell just shy of their target. 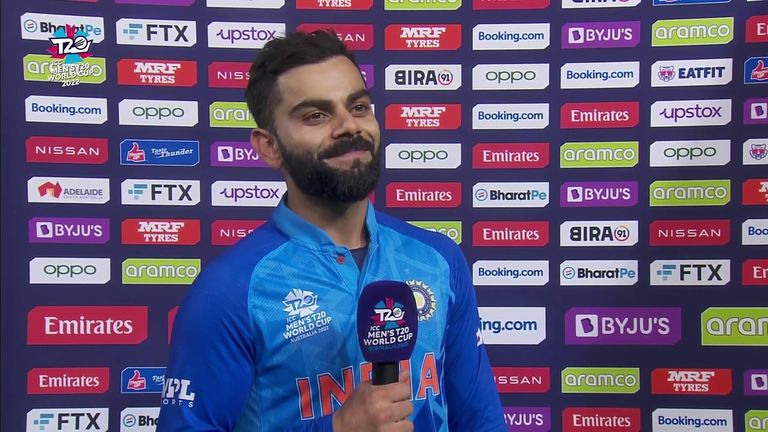 India play Zimbabwe in Melbourne on Sunday (8am UK time), with Bangladesh facing Pakistan earlier on Sunday on Adelaide (4am UK time).