Coverage continues from 7pm on Sky Sports Darts on Monday The Japanese star missed darts to win the first set and slipped to a 2-0 deficit amid a host of missed doubles but, roared on by a raucous crowd - who cheered her every treble and greeted almost every Richardson dart with a cacophony of pantomime villain boos - she fought her way back into the contest before coming up agonisingly short.

Just over an hour later, another huge shock rocked north London as last year's runner-up Smith was stunned by the world No 69 Luke Woodhouse, who chalked up a memorable 3-1 win in their second round encounter.

Bully Boy becomes the third member of the world's top 10 to crash out after just three days of action at Ally Pally - with defending champion Michael van Gerwen the only seeded player to register a victory from the five to have played.

Never before on the World Championship stage has a woman beaten a man, and after Lisa Ashton took a set off Jan Dekker last year, Suzuki picked up the baton in style, firing three 100+ finishes to fall agonisingly short in a 3-2 defeat. 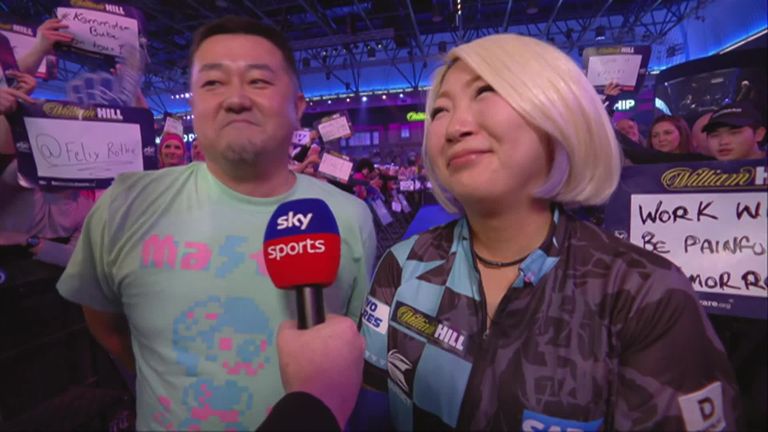 A thrilling opening set saw Richardson pile in a couple of 180s but Suzuki's breathtaking 151 finish saw her take the lead in the third leg of the contest. With the pair locked at 2-2, Suzuki, and an enthralled crowd, had an early chance for the lead.

Having found trebles with her first two darts, a shot at double 11 but, more importantly, three more missed darts at the same target followed. The set slipped by when Richardson took out tops with his third dart in hand.

It was a similar story in the second as Suzuki missed a dart for a 105 finish and the lead, allowing Richardson to pin double top again. 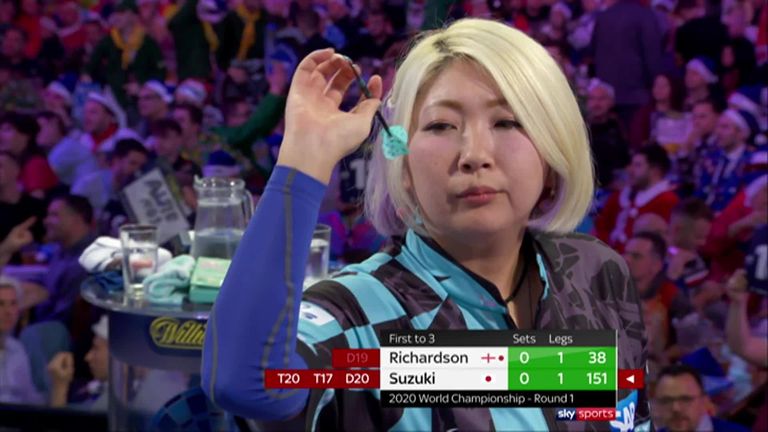 More missed darts from Suzuki cost her as Richardson moved into a 2-0 lead. When he raced to a fourth and fifth leg in succession, The Joker was on the brink of victory, only to see two match darts go begging.

Suzuki conjured up a brilliant fightback, winning three legs on the bounce to pick up her first set. Two more legs followed, including a nerveless 105 finish to lead the fourth set 2-0 and, while Richardson stopped the rot at five, Suzuki was not to be denied.

She crashed in a second maximum and then took out 76 to force a fifth and final set which see-sawed both ways, Richardson edging into a 2-1 lead only for Suzuki to delight the crowd with a 101 finish that took the match distance where Richardson prevailed.

Woody became the latest emerging force to announce himself on the biggest stage of all, ending Smith's hopes of going one better than his final defeat last year. 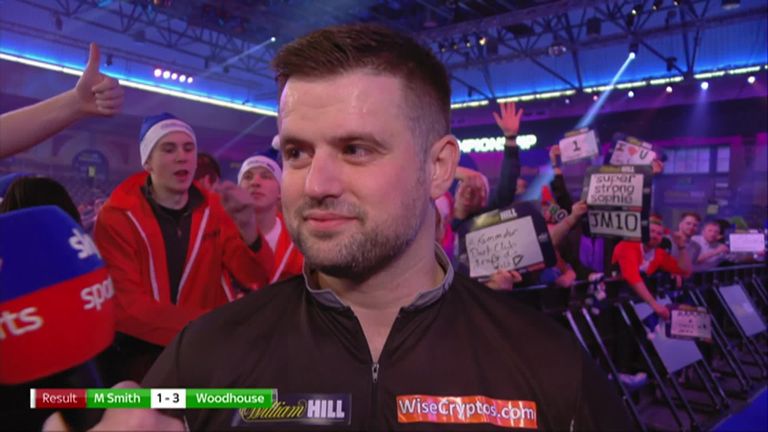 Having qualified through the Pro Tour, 31-year-old Woodhouse knew he had to put together a run to retain his Tour card, and he has achieved just that with a pair of victories over a memorable weekend.

He marked his debut with a 3-0 win over the legendary Paul Lim and proved too strong for an out-of-sorts Smith, who was well below his best in falling to an early 2-0 deficit.

Smith stirred to claim the third set but only after Woodhouse missed six darts for the match and a comprehensive 3-0 victory, but it merely delayed the inevitable as Woody got over the line in the fourth.

Bully Boy worked himself into a 2-1 advantage in the final set but rarely looked like taking control and Woodhouse completed the job with double top sealing a third round spot on his first appearance at the event. 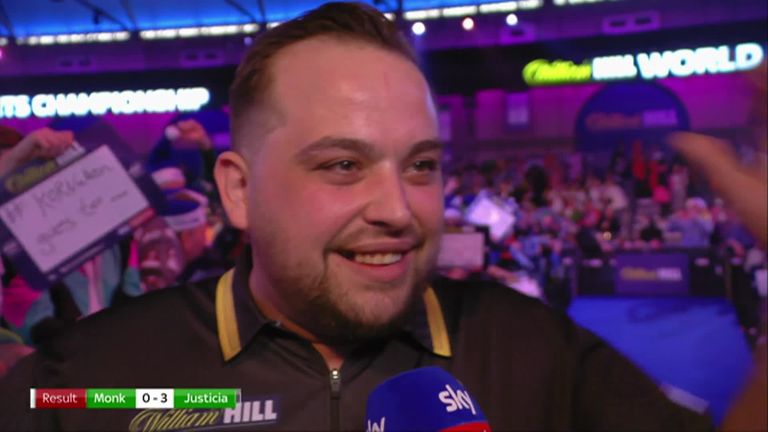 The ever-growing global nature of the game was evident in the opening two matches of the evening as debutants from Spain and America claimed victories, a place in the second round and a minimum of £15,000 in prize money.

First, Jose Justicia from Valencia, made short work of Arron Monk, son of two-time Lakeside semi-finalist Colin. The Spaniard blasted his way to a 3-0 win and a date with 17th-seed Stephen Bunting on Wednesday afternoon.

Then it was the turn of Danny Baggish to advance, albeit in tougher circumstances as his contest against Andy Boulton went the distance before the man from Florida, having been born in Guam, prevailed.

The pair split the first two sets, with Baggish playing catch-up throughout and fighting back amid a torrent of 180s from the X-Factor. But Baggish stood firm to take the decider 3-1 and move onto a showdown with last year's semi-finalist Nathan Aspinall.

Two-time champion Gary Anderson becomes the latest seed to test his mettle and, after an injury-plagued year, not many know what to expect. Brendan Dolan is about as tricky an opponent as he could face in the second round.

Anderson missed the first part of the year with a back injury and has struggled for consistency since his return, but having lifted the Sid Waddell Trophy in 2015 and 2016, Ally Pally could well inspire him to greater heights again. 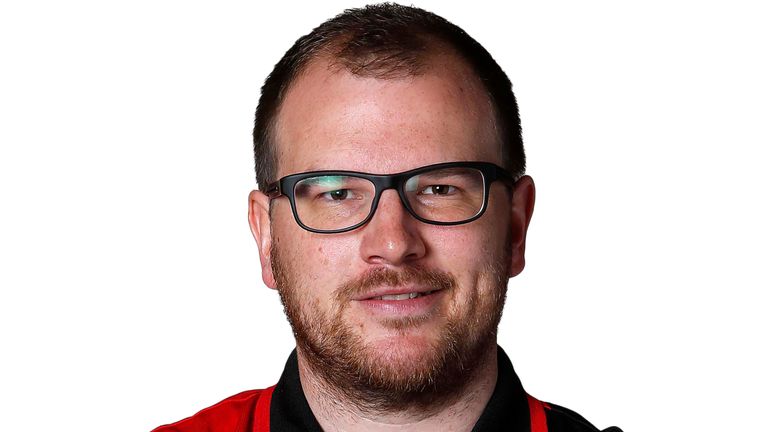 "It's a tough test for Gary but that will see where he's at. He's not going to ease his way into the competition. He's going to have to perform from the off.

"[Anderson's form] is a little bit indifferent. Hopefully it just clicks into gear this year because we want to see the best Gary Anderson

Dolan has enjoyed an impressive year, claiming a couple of Pro Tour titles for the first time since 2014 after his run to the quarter-final at Ally Pally last year and the head-to-head between the pair is eight wins apiece.

Ireland takes centre stage alongside Anderson with a representative from the Emerald Isle in each of Monday's four matches.

Keane Barry, 17, is also on the oche for a World Championship debut and he faces crowd favourite Vincent van der Voort, whose walk-on always gets the crowd going.

But Barry, who also plays in the Junior World Championship final at Alexandra Palace on Saturday, has a solid action and is a fearsome scorer - experience may prove decisive in the end for the veteran Dutchman.

Ireland dazzled at the World Cup, reaching the final, and the pairing of William O'Connor and Steve Lennon complete the Monday line-up with Lennon opening the evening against Callan Rydz and O'Connor facing Marko Kantele knowing a meeting with Gerwyn Price looms in the second round.

Coverage continues on Monday on Sky Sports Darts from 7pm and the action continues through to the final on New Year's Day. If you are out and about you can follow with regular updates, clips, features & reports at skysports.com/darts, our app for mobile devices and @SkySportsDarts