Joe Cullen is regarded as one of the most enigmatic performers in the sport, but after reaffirming his credentials on the PDC Home Tour, 'The Rockstar' has candidly revealed his struggle with motivation during lockdown and his renewed desire to fulfil his potential.

Cullen's talent is indisputable. He's hovered among the top 16 throughout the last few years and a brace of Pro Tour titles coupled with his maiden European Tour triumph last year - which saw him defeat Michael van Gerwen in the final - provides further illustration of his quality.

Nevertheless, he has been unable to replicate that success in the televised arena, appearing in four major quarter-finals and featuring in the solitary semi-final at the 2018 European Championship - a record he concedes is not good enough for a player of his prodigious ability.

Cullen finished runner-up to Ryan Murray in his first appearance of the Home Tour on Night 20, but he grasped his second opportunity in sensational style on Night 31 - producing the performance of the tournament thus far.

The world number 16 will now feature in the last 32 on May 31, in a group that also includes Premier League challenger Chris Dobey, former Lakeside finalist Jeff Smith, and emerging Dutchman Martijn Kleermaker.

"It was good fun. It got my passion a little bit back for darts, I'd been missing it and my performance showed the second time," Cullen told the Darts Show podcast.

"We're used to being away almost constantly and it's just a change - I was really struggling to motivate myself to do anything really.

"We'd been on family walks and things but as far as practice goes, I just couldn't motivate myself and I was really struggling."

There has been no competitive darts since a Players Championship double-header in mid-March and there is little prospect of a return before July, with the PDC reliant upon social distancing guidelines imposed by the government.

It is inevitable that the coronavirus pandemic will have an unprecedented impact from both a short-term and long-term perspective across the entire sporting industry, and darts is no exception.

The Premier League is scheduled to resume on July 30 and a decision on July's World Matchplay is set to be made within the coming weeks and whilst unavoidable, Cullen admits the uncertainty is proving challenging.

"The immediate response from myself, for instance - if we knew an exact date when we were going to be back then it is something to work towards. All of the uncertainty, it's the same for everyone. It won't just be myself that's struggling to practice.

"When the calendar is full, we factor in a couple of weeks out to have a break with family and things like that, but this has been taken out of our control. We're all bound by the government.

"I think that Barry [Hearn] will be the first to try and get something up somewhere but everyone is the same, all sports.

"I think that is why no-one is really enjoying the time off because we don't know when we're going to be back. The top 32 and to those outside of it, this is literally all that I've got.

"I'm on pretty good money and I'm financially stable being in the top 16, but money doesn't last forever and we need to be back working as soon as possible."

This prolonged hiatus is uncharted territory for many PDC professionals, although Cullen has been attempting to channel his efforts positively.

The Yorkshireman is a self-confessed sports fanatic and has resolved to improve his fitness during the enforced lay-off - an increasingly important factor amid the notoriously gruelling PDC circuit.

"At the minute, I'm fishing. The idea of it was great but at 5:30am this morning, it is not so great. Everything I play, I have got to win!

"To keep busy, I've been doing 5km every day and a couple of 10km to try and keep the timber down. I've lost nearly a stone through running!"

Ironically, Cullen acknowledged that his passion for sport may have had a detrimental impact on his darting career, but he's determined to maximise his potential and translate his talent into tangible success.

"The stigma that's attached with me since I've been playing is that I've threatened great things and I'll be the first to admit that I've been nowhere near as dedicated as some of the other boys. I just love all sport," he added.

"I'd much rather go and practice an hour at snooker than darts, but snooker is not going to make me any money and darts is. It is where I need to concentrate all of my efforts once we're back playing again." 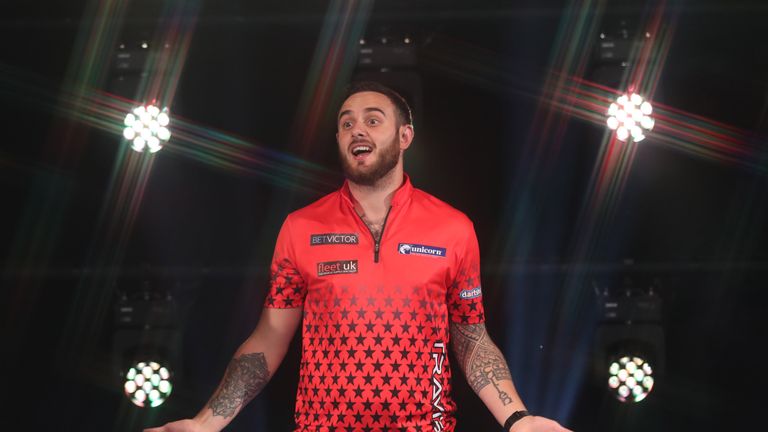 Obviously I've dedicated my life to it but not as much as I should do or want to do, if I want to push on to be in the elite.

From a technical perspective, Cullen possesses all the tools, and his languid action is a joy to watch in full flow. Yet he openly attributes his inconsistency to a lack of dedication compared to the world's best.

"Yes, I definitely should [have won a bit more]. I think that my problem is, and I've actually spoken about it with Mark Webster - if you draw me, you don't know what you're getting, which isn't a good thing.

"If you draw Michael van Gerwen, you know exactly what you're getting and what you're up against.

"The inconsistency in my game is purely down to the lack of dedication. Obviously I've dedicated my life to it but not as much as I should do or want to do, if I want to push on to be in the elite.

"I've not fallen out of love with the game, per se. Darts is one of the last things on my mind, I've got other things going on. Now, my mum has three jobs, she's up at silly o'clock and back at silly o'clock.

"I'm getting paid stupid amounts of money for throwing three bits of metal, essentially. I think it has definitely made people not take things for granted as much."

Cullen will turn 31 in July, but he is almost considered a stalwart given the fact he's featured prominently in major tournaments throughout the last decade - bursting on to the scene as an 18-year-old at the 2008 UK Open.

He's been involved in a host of classic showdowns over recent years - his agonising quarter-final defeat to eventual champion Gary Anderson at the 2018 World Matchplay is a memory that constantly resurfaces.

However, this period could prove definitive for 'The Rockstar'. He will continue to create opportunities by virtue of his ability, yet his renewed vigour could be the catalyst in the search for major glory when competitive darts resumes.